What is CAT (Common Admission Test)

The Common Admission Test (CAT) is a computer based test for admission in a graduate management program.

The test consists of three sections

Overall it’s a three hour online exam divided into one hour each section. The Indian Institutes of Management (IIMs) started this exam and use the test for selecting students for their business administration programs (MBA or PGDM). The test is conducted every year by one of the IIMs based on a policy of rotation. 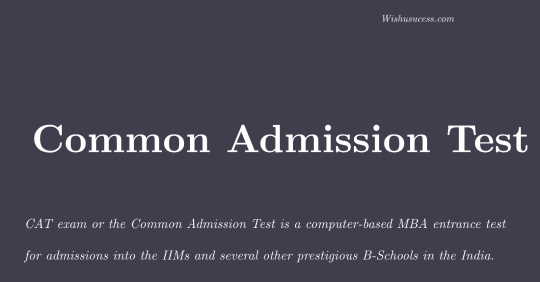 In August 2011, it is announced that Indian Institutes of Technology (IITs) and Indian Institute of Science (IISc) would also use the CAT scores, instead of the Joint Management Entrance Test (JMET), to select students for their management programmes starting with the 2012-15 batch.

Before 2009, CAT was a paper based test conducted on a single day for all candidates. The pattern, number of questions and duration have seen considerable variations over the years.

On 1 May 2009, it was announced that CAT would be a Computer Based Test starting from 2009. The American firm Prometric was entrusted with the responsibility of conducting the test from 2009 to 2013.

The first computer based CAT was marred with technical snags. The issue was so serious that it prompted the Government of India to seek a report from the convenor.

The trouble was diagnosed as 'Conficker' and 'W32 Nimda', the two viruses that attacked the system display of the test, causing server slow down.

Since 2014 onward, CAT has been conducted by Tata Consultancy Services (TCS). CAT 2015 and CAT 2016 were 180-minute tests consisting of 100 questions (34 from Quantitative Ability (QA), 34 from Verbal Ability and Reading Comprehension (VARC), and 32 from Data Interpretation and Logical Reasoning (DILR)).

Offered: Once a year (usually in November/December).

Countries / Regions: 354 centres in 99 cities and towns all over India.

The candidate must satisfy the below specified criteria:[9]

Hold a bachelor's degree, with no less than 50% or equal CGPA (45% for Scheduled Caste (SC), Scheduled Tribe (ST) and Persons with Disability (PWD)/Differently Able (DA) classification)

The degree should be granted by any of the universities consolidated by an act of the central or state statutory body in India or other instructive organizations built up by an act of Parliament or pronounced to be considered as a university under Section 3 of the UGC Act, 1956, or possess an equivalent qualification recognized by the Ministry of HRD, Government of India.

Competitors appearing for the final year of bachelor's degree/equivalent qualification examination and the individuals who have finished degree prerequisites and are anticipating results can likewise apply.

If selected, such applicants will be permitted to join the program temporarily, only if they present a certificate most recent by June 30, 2020, from the principal/registrar of their college/institute (issued at the latest June 30, 2020) expressing that the competitor has finished every one of the prerequisites for acquiring four-year or three-year college education/identical capability on the date of the issue of the certificate.

The Common Admission Test (CAT), like virtually all large-scale exams, utilizes multiple forms, or versions, of the test. Hence there are two types of scores involved: a raw score and a scaled score.

The raw score is calculated for each section based on the number of questions one answered correctly, incorrectly, or left unattempted.

CAT is conducted in two sessions.

CAT is a computer-based test which consists of 3 sections:

CAT Registrations in numbers over the years

The number of registrations in the past years are shown in the following chart:

Number of registrations in CAT over the years