Jawaharlal Nehru University (JNU) is a public central university located in New Delhi, India. It was established in 1969 and named after Jawaharlal Nehru, India's first Prime Minister. The university is known for leading faculties and research emphasis on liberal arts and applied sciences. 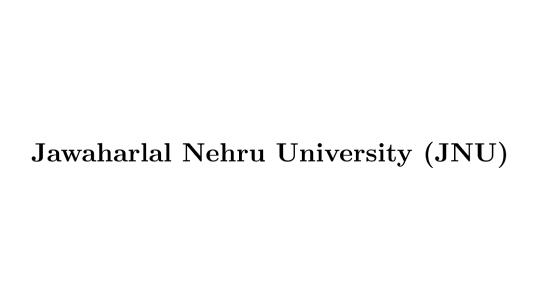 Jawaharlal Nehru University was established in 1969 by an act of parliament. It was named after Jawaharlal Nehru, India's first Prime Minister. G. Parthsarthi was the first vice-chancellor. Prof. Moonis Raza was the Founder Chairman and Rector. The bill for the establishment of Jawaharlal Nehru University was placed in the Rajya Sabha on 1 September 1965 by the then minister of education, M. C. Chagla. During the discussion that followed, Bhushan Gupta, member of parliament, voiced the opinion that this should not be yet another university. New faculties should be created, including scientific socialism, and one thing that this university should ensure was to keep noble ideas in mind and provide accessibility to students from weaker sections of society. The JNU Bill was passed in Lok Sabha on 16 November 1966 and the JNU Act came into force on 22 April 1969.

JNU has granted recognition and accreditation to the following institutions across the country.

In addition, the university has exchange programmes and academic collaboration through the signing of MoUs with 71 universities around the world. The University has also sent a proposal to set up a Center in Bihar. The Indian Administrative Service (IAS) trainee officers will be awarded an MA degree in Public Management from Jawaharlal Nehru University (JNU), Delhi.

The JNU is infused with an intense political life on campus. Students that leave campus are said to acquire a "permanently changed outlook on life" as a result of the student politics. The politicization of campus life has led to a refusal to brush under the carpet social issues such as feminism, minority rights, social and economic justice. All such issues are debated fiercely in formal and informal gatherings.

The JNU student politics is left-of-centre even though, in recent years, right-wing student groups have also entered the field. Political involvement is "celebratory in spirit." The student union elections are preceded by days of debates and meetings, keeping all students involved. The JNU has the reputation of an "unruly bastion of Marxist revolution." However, the student activists deny the charge, stating that the politics at JNU is issue-based and intellectual.

The university is known for its alumni who now occupy important political and bureaucratic positions (see Notable alumni below). In part, this is because of the prevalence of Left-Centric student politics and the existence of a written constitution for the university to which noted Communist Party of India leader Prakash Karat contributed exhaustively during his education at JNU.

JNU was shutdown for 46 days by Indian government in 1981 after violence by student unions linked to communist parties.

In April 2000, two army officers who disturbed an Indo-Pak mushaira at the JNU campus were beaten up by agitated students. The officers were angered by anti-war poems recited by two Pakistani poets and disrupted the mushaira. They were enraged at the recited lines of a poem by progressive Urdu poetess, Fahmida Riaz Tum bhi bilkul hum jaise nikle ("It turned out you were just like us") and interpreted the lines as a criticism of India. One of them started to shout anti-Pakistan slogans. When the audience asked for silence. They were overpowered by security and then beaten by students, though not seriously injured. The Indian Army denied the charges and it was reported that the two army officers were admitted in hospitals. A retired judge was appointed to probe the accusation.

On 24 October 2008 the Supreme Court of India stayed the JNU elections and banned the JNUSU for not complying with the recommendations of the Lyngdoh committee.[note 1] After a prolonged struggle and multi-party negotiations, the ban was lifted on 8 December 2011. After a gap of more than four years, interim elections were scheduled again on 1 March 2012. Following the election results declared on 3 March 2012, All India Students Association (AISA) candidates won all four central panel seats and Sucheta De, the president of AISA became the president of JNUSU.

In 2010 a "JNU Forum Against War on People" was organised "to oppose Operation Green Hunt launched by the government." According to the NSUI national general secretary, Shaikh Shahnawaz, the meeting was organised by the Democratic Students' Union (DSU) and All India Students Association (AISA) to "celebrate the killing of 76 CRPF personnel in Chhattisgarh." Shaikh Shahnawaz also stated that "they were even shouting slogans like 'India murdabad, Maovad zindabad'." NSUI and ABVP activists undertook a march against this meeting, "which was seen as an attempt to support the Naxalites and celebrate the massacre," whereafter the various parties clashed. The organisers of the forum said that "the event had nothing to do with the killings in Dantewada"

In 2015, the JNU Students' Union and the All India Students Association objected to efforts to create instruction on Indian culture. Opposition to such courses was on the basis that such instruction was an attempt to saffronise education. Saffronisation refers to right-wing efforts to glorify ancient Hindu culture. The proposed courses were successfully opposed and were, thus, "rolled back." A former student of JNU and a former student union member, Albeena Shakil, claimed that BJP officials in government were responsible for proposing the controversial courses.

On 28 December 2014, the symbolic "Rainbow Tree" which stood for LGBTQ pride was vandalised. To counter the "growing homophobia" on the campus, JNU Students’ Union along with other queer groups like Anjuman and Dhanak, led a march on 9 January, called Rainbow Walk. The march started from JNU's Ganga Dhaba and ended at the Rainbow Tree spot. The protestors criticised the 2013 verdict of the Supreme Court nullifying the Delhi High Court order reading down Section 377 of the IPC. The campaign aimed at celebrating individual right to sexual freedom and identity. The march was filled with songs and slogans; the students also painted a zebra crossing in rainbow colours and wrapped trees with rainbow coloured threads.

On 9 February, a cultural evening was organised by 10 students, formerly of the Democratic Students' Union (DSU), at the Sabarmati Dhaba, against the execution of Afzal Guru and separatist leader Maqbool Bhat, and for Kashmir's right to self-determination. "Anti-India" slogans like "Pakistan Zindabad", "Kashmir ki azadi tak jung chalegi, Bharat ki barbadi tak jung chalegi" ("War will continue till Kashmir's freedom, war will continue till India's demolition") were reportedly raised at the protest meet." Protests by members of ABVP were held at the University demanding expulsion of the student organisers.

JNU administration ordered a "disciplinary" enquiry into the holding of the event despite denial of permission, saying any talk about country's disintegration cannot be "national". The Delhi Police arrested the JNU Students' Union President Kanhaiya Kumar and Umar Khalid on charges of sedition and criminal conspiracy, under section 124 of the Indian Penal Code dating back to 1860.

The arrest soon snowballed into a major political controversy, with several leaders of opposition parties visiting the JNU campus in solidarity with the students protesting against the police crackdown. More than 500 academics from around the world, including JNU alumni, released a statement in support of the students. In a separate statement, over 130 world-leading scholars including Noam Chomsky, Orhan Pamuk and Akeel Bilgrami called it a "shameful act of the Indian government" to invoke sedition laws formulated during colonial times to silence criticism. The crisis was particularly concerning to some scholars studying nationalism. On 25 March 2016, the Google Maps search for 'anti national' led users to JNU campus.

On 13 November 2019, the JNU administration raised the fees of the university making it one of the most expensive university of India. Since 28 October 2019, students of JNU had been protesting against fee hike. As a part of this protest, students boycotted the final semester examinations. After protests, the University partially rolled back by reducing fee only for students from families with extreme poverty (BPL category) who do not avail any scholarship. The move did not convince the students as there was no rollback in the fee hike for non-BPL category students neither for BPL students availing a scholarship. To press the administration for a complete rollback of the increase in fees, JNUSU had continued the protests. The semester registration with the revised fee was started by January 1.

On Jan 5, 2020 a group of masked vandals entered the campus, destroyed property and beat up several people. This included students and professors. This drew widespread condemnation from the public, with opposition parties, Bollywood celebrities and human rights activists expressing their concerns.

The International Student's Association (ISA) is an official Jawaharlal Nehru University body. It was instituted in 1985 with a view to promoting friendly relations and cultural exchange. The ISA has a constitution and elected executive, cultural, advisory and financial committees. All foreign students of JNU are also members of the FSA. The university has 133 international students.

JNU was awarded the "Visitor's Award" for "Best University" in 2017 by the President of India.