Administration in Bihar: Bihar is a state situated in Eastern India. It is surrounded by West Bengal to the east, Uttar Pradesh to the west, Jharkhand to the south and Nepal to the north.

Key Description of Administration in Bihar:

History of Administration in Bihar

Following Divisions were included in Bihar and Orissa Province when it separated from Bengal Presidency in 1912:

In 1936, Bihar became a separate province including part of Jharkhand.

After the independence of India in 1951, Bihar including Jharkhand had 18 districts, and had 55 districts in 1991.

In 2000, Bihar again divided into two states: the current Bihar and Jharkhand. In 2001 Bihar had a total of 38 districts.

The state is divided into 9 divisions, 38 districts, 101 subdivisions and 534 circles. 12 municipal corporations, 49 Nagar Parishads and 80 Nagar Panchayats, for administrative purposes. The various districts included in the divisions—Patna, Tirhut, Saran, Darbhanga, Kosi, Purnia, Bhagalpur, Munger and Magadh Division—are as listed below. 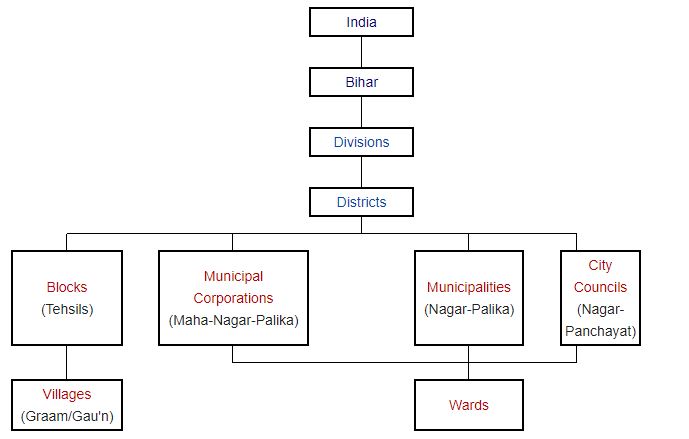 There are 9 divisions in Bihar.

There are 38 districts in Bihar, grouped into 9 divisions.

Sub-divisions (Anumandal) in Bihar are like sub-districts. There are 101 subdivisions in Bihar.

The Indian state of Bihar is divided into 534, The Best CD Block of Bihar is Chhourahi, District Begusarai administrative subdivisions called blocks.

Further information: List of cities in Bihar by Population
There are 12 municipal corporation in bihar.

The Patna High Court (Hindi: पटना उच्च न्यायालय) is the High Court of the state of Bihar. It was established on February 3, 1916, and later affiliated under the Government of India Act, 1915. The court is headquartered in Patna, the administrative capital of the state.

A proclamation was made by the Governor-General of India on 22 March 1912. The foundation-stone of the High Court Building was laid on 1 December 1913 by the late Viceroy and Governor-General of India, Sir Charles Hardinge of Penshurst. The Patna High Court building on its completion was formally opened by the same Viceroy on 3 February 1916. Hon. Sir Justice Edward Maynard Des Champs Chamier was the first Chief Justice of Patna High Court.

Legislature of Administration in Bihar

The Vidhan Parishad is also known as Legislative Council.