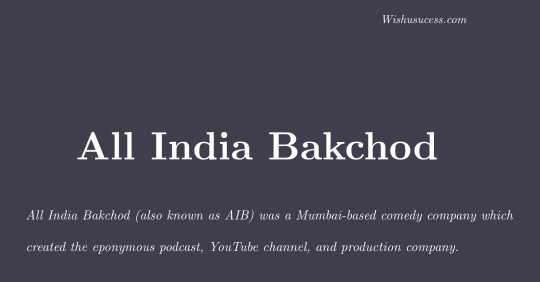 All India Bakchod (also known as AIB) was a Mumbai-based comedy company which created the eponymous podcast, YouTube channel, and production company.

The name is a parody of All India Radio and bakchod is Hindi slang for dumb fuck. It began in 2012 as a humor/pop-culture podcast co-started by comedians Tanmay Bhat and Gursimran Khamba.

Their friends and contemporary comedians, Rohan Joshi and Ashish Shakya were frequent guests, and the four co-founded the namesake YouTube channel in 2013, and began making sketches.

They subsequently formed a digital agency and produced sketches, live comedy, and TV shows. Khamba now also has a independent youtube channel. His vlogs are a slight sneek peek of his life.

In October 2018, the company halted operation, and fired its entire staff, after Bhat and Khamba were implicated in two separate sexual harassment allegations. No formal charges were made, but the company dissolved in May 2019.

Khamba was dissatisfied with the independent investigation into the allegation against him and has since disassociated himself with the company, and brand. The company's four founders continue to work in the comedy circuit. Bhat, Joshi and Shakya continue to collaborate independently. The company's social media accounts, and YouTube channel, remain active.

Key Description of All India Bakchod

Joshi and Bhat performed improv with Das, Kavi Shastri, Ashwin Mushran and Anu Menon as The Cardinal Bengans. Bhat also wrote for Hindi TV and he and Joshi both contributed to JLT (a.k.a. Just Like That ), a weekly youth-focused magazine published by The Times of India.

Gursimran Khamba was a Delhi-based humour blogger who had gained popularity with political commentary, satirical essays and film reviews.

He had also contributed to satirical news magazine Faking News.In 2011, he moved to Mumbai to attend graduate school at Tata Institute of Social Sciences (TISS) and soon transitioned to stand-up and podcasting. Bhat approached Khamba after seeing him perform stand-up, and in 2012 they began the humour and pop-culture SoundCloud podcast All India Bakchod. Initial podcast topics included discussions on pop-culture, parody songs and interviews with contemporary comedians. Joshi and Shakya were frequent guests, first appearing in the third episode.

When performing or working as a quartet, the four comedians were commonly referred to as AIB. They co-founded the All India Bakchod YouTube channel in 2013 and began writing sketches. They subsequently formed AIB as a comedy company which filmed videos, performed stand-up comedy and co-wrote shows. By early 2015, the comedy group became a creative agency, making branded content for corporate clients.

AIB started uploading sketches to YouTube in February 2013. Their first series, AIB 365, used mimicry and other comedic devices. In April 2013, they created a spoof of Bollywood award shows, Royal Turds, and performed it live for over a year.

In September 2013, their sketch It's Your Fault went viral. It was a satirical take on the Indian patriarchal mindset of victim blaming. During this period, comics Karunesh Talwar and Abish Matthew were frequent collaborators.

In December 2014, they performed and filmed the All India Bakchod Knockout (a celebrity roast) at the NSCI Dome in Worli. Karan Johar was the host with roasters AIB, Rajeev Masand, Raghu Ram, Aditi Mittal and Abish Matthew. Ranveer Singh and Arjun Kapoor were roasted. The show was uploaded on YouTube and subsequently removed from its channel because of widespread public backlash. AIB apologized and explained their decision:

First things first; no one person or force forced us to take this video down. This is not something that's happening because of a 3 am phone call or morcha [protest] at our front door or a gunman on a grassy knoll. Under the circumstances, this is us being pragmatic.

Multiple Bollywood celebrities expressed both their displeasure at the content and positive support in favor of artistic freedom.

Facing public backlash due to Knockout, AIB ceased uploading content until 11 April 2015 when they released a call to action video which urged viewers to email their member of parliament to support net-neutrality. In February 2017, they made a video asking people to vote in the BMC Mumbai elections.

By May 2015, AIB had transitioned into a creative agency and started an advertisement division called Vigyapanti. Between 2015 and 2018 they hired and contracted multiple writers to work on branded content. During this period, the four original members, with a writing team, created a satirical web television show called On Air With AIB, produced by Only Much Louder.

This show ran on Hotstar for three seasons, with some shorter segments uploaded on the AIB YouTube channel along with branded content. In 2016, they launched film-making workshop First Draft. By September 2018, they had 40 employees working as writers and producers.

In December 2016, a report stated that AIB was producing Amazon Prime Video's first Indian original fiction show, Ministry, starring Irrfan Khan. In October 2017, it was reported that Khan would play a washed-up Bollywood actor seeking to regain the love of the masses while appointed as a placeholder culture minister.

In August 2018, Irrfan left the project due to a health issue, and the show was renamed to Gormint, a pronunciation from a viral video of an elderly woman criticizing the government. In November 2018, Khamba was fired as showrunner after allegations of sexual misconduct against him surfaced.[40][41] In May 2019, Khamba uploaded a photograph of the end of filming.[6][42][needs update]

Chintu Ka Birthday was AIB's first self-financed film. It was released after the company's dissolution and the individual co-founders are listed as producers.[43] It was co-directed by frequent collaborators Devanshu Kumar and Satyanshu Singh, and starred Vinay Pathak and Tillotama Shome. The film will be released on ZEE5 on 5 June 2020.

Parodies featured in AIB's works from their initial podcast, exaggerating the songs of Baba Sehgal ("Paaji Fuck All Control [The Pro Boy Feticide Song]"), and John Lennon ("Imagine There's No Channel"). AIB's first foray into YouTube consisted of short spoofs and mimicry-based sketches. Song parodies continued to feature in their work, along with stereotypical situations, and plays on heavy nostalgia. They popularized a satirical trope, "Honest Indian...", which they applied to various situations.

Criticism of All India Bakchod

In May 2017, Sanjay Rajoura, a comedian and writer, criticized AIB for making fun of Dalits (a marginalized ethnic minority in India) and being racist. Later in the year, AIB's progressive outlook was criticized for reproducing "the very models of patriarchy it seeks out to address".

In February 2017, within a week of being hired as a social-media writer, 22-year-old Krupa Gohil felt, "the company in general, and the four founders in particular, saw the internet's emerging conversation about feminism as just another meme-worthy narrative to tap into." Gohil said: "[an employee] made a meme about smashing patriarchy but he didn't even know what patriarchy meant. It was just made and shared on social media to score woke points. These were empty, token actions."

Another writer, Nisha Karla corroborated Gohil's sentiment on the work culture. She said that in July 2017, when she was working with AIB as a writer on a contract, a male employee dropped his trousers and underpants and exposed his penis. This incident was repeated by the man, for three days, and when he exposed his penis in her presence, thrice in a single day, Kalra decided to confront the person, who said his "pants were loose". After she filed a formal complaint, the man was fired after an independent inquiry.

In early 2018, contemporary comics called out the group on their unidimensional portrayal of female characters who had no agency in their work. Characters in their sketches, podcast guests and their collaborators skewed towards being almost entirely male. The group addressed the issue and said they'd "work harder to create content that's inclusive." Since 2017, they have deleted material that has drawn criticism including videos that Utsav Chakraborty had worked on.

On 4 October 2018, comedian and actor Utsav Chakraborty, a former editor at Huffington Post India, former AIB employee and frequent collaborator, was accused of impropriety. The allegations against Chakraborty garnered attention when poet Mahima Kukreja accused him of sending her an unsolicited explicit image.

Before publicly denouncing Chakraborty on Twitter, Kukreja had previously told Bhat about Chakraborty's behaviour. Bhat confronted Chakraborty, took no action, and continued a professional working relationship between Chakraborty and AIB. This incident was the genesis of the Indian #MeToo movement in 2018.

One year later, Chakraborty made public statements alleging that Bhat did not act as he said previously and that Chakraborty was "thrown under the bus" in an attempt to save the company and called the allegations "fabricated".

In a series of Instagram videos, Bhat issued an update on his professional and personal life. He said he was diagnosed with Clinical Depression at the end of 2018, while the company was being shut down. He said he felt "mentally checked out" and "paralyzed and unable to participate socially, online or even offline". His statement drew both support and criticism from former colleagues and contemporaries.

On 8 October 2018, Khamba was accused of violating consent and emotional abuse by an unknown woman. She said they had "hooked up two-three times" and continued being friends. She added that Khamba drunk called her and threatened to ruin their friendship and emotionally blackmailed her for five months. Khamba acknowledged to a certain degree of misbehaviour but has rejected the suggestion that he violated her consent.

Regarding the statement, Khamba said the allegation was made by a person who shared a "deep personal relationship" with him. He said that an independent committee looked into the allegation for four months and was "replete with procedural lapses and did not follow principals of natural justice". He withdrew from the committee because of this. He founded a new digital content company called Light@27.

As a result of these allegations, Bhat was asked to step away from the company and Khamba was put on indefinite leave. Both were fired from their roles as judges on the talent show Comicstaan and other Amazon projects. Khamba was fired from his position as showrunner on Gormint. The company's web television show On Air With AIB was canceled. Chintu Ka Birthday (Chintu's Birthday), an AIB produced film, was dropped from the 2018 MAMI Mumbai Film Festival and its Netflix release was cancelled.

Dissolution of All India Bakchod

On 8 October 2018, Khamba and Bhat were asked to leave AIB due to their involvement and complicit behaviour in separate sexual harassment allegations. Subsequently, Bhat was asked to step away from the company and Khamba was put on indefinite leave.

The two were also fired from various roles they individually held on other shows. The company's web television show was cancelled entirely by its network, Hotstar, mid-season. In October 2018, the company was temporarily shut down and was steering towards permanent closure.

In May 2019, they issued a statement that confirmed that their entire staff was let go, that Bhat's suspension was lifted (but he would not be allowed to return as CEO) and that Khamba had cut all ties with the company. Bhat, Joshi, and Shakya have since re-entered the comedy circuit, and continue to be associated with the company's name. Khamba, dissatisfied with an independent inquiry into the allegation against him, decided to leave the company and start another comedic venture.

At the time of dissolution, Bhat, Joshi, Shakya and Khamba each owned 25 per cent of the company. As of March 2018, the company collectively owed the founders just over $51,000 from loans. In May 2019, AIB announced that their YouTube channel was dead for the foreseeable future. In May 26 and 27 of 2020, they broke their silence on Instagram and Twitter respectively to announce the world satellite premiere of Chintu Ka Birthday.[93][94] The trailer of the film was uploaded to AIB's YouTube channel in May 29, 2020.