Amit Anilchandra Shah (born 22 October 1964) is an Indian politician serving as Minister of Home Affairs who served as the President of the Bharatiya Janata Party (BJP) from 2014 to 2020.

He also became the youngest serving full-time Home Minister at an age of 54. He is the chief strategist of the BJP and a close aide to Narendra Modi.

During his college days, Shah was a member of ABVP, the student wing of the RSS. At the age of 18, he secured a position in the ABVP and joined the BJP in 1987.

He is a close associate of Prime Minister Narendra Modi and holds executive portfolios in the state government during Modi's tenure as the Chief Minister.

Shah was the BJP's in-charge for India's largest and politically most crucial state, Uttar Pradesh, during the 2014 Lok Sabha elections.

The BJP and its allies swept the state, registering their best performance, by winning 73 out of 80 seats. As a result, Shah rose to national prominence and was appointed as the party's national president in July 2014.

He has played an organizing and membership-promotional role in elections of many states since 2014. In his initial two years, the BJP achieved success in Legislative Assembly elections in Maharashtra, Haryana, Jammu & Kashmir, Jharkhand in 2014 and in Assam but lost ground in Delhi and the large eastern state of Bihar in 2015.

He was, in 2017, partly credited with the party victories in Uttar Pradesh, Uttarakhand, Gujarat and Manipur, but the Akali-BJP alliance lost power in considerably larger Punjab.

In 2018, the party lost power in the states of Chhattisgarh, Rajasthan and Madhya Pradesh. The next year, BJP won 303 seats to get majority in the 2019 Indian general election under Shah's leadership.

Office: Member of the Lok Sabha Since 2019

Shah was born in Mumbai on 22 October 1964. He came from a Gujarati Hindu Vaishnava family who were Baniyas. His great grandfather was the Nagarseth of the small state of Mansa.

His father Anil Chandra Shah, a businessman from Mansa, owned a successful PVC pipe business. He did his schooling in Mehsana and moved to Ahmedabad to study biochemistry at CU Shah Science College. He graduated with a BSc degree in biochemistry, and then worked for his father's business.

He also worked as a stockbroker and in co-operative banks in Ahmedabad.

Shah was involved with the Rashtriya Swayamsevak Sangh since childhood, participating in the neighborhood shakhas (branches) as a boy.

He formally became an RSS swayamsevak (volunteer) during his college days in Ahmedabad. He first met Narendra Modi in 1982 through Ahmedabad RSS circles.

At that time, Modi was an RSS pracharak (propagator), working as in-charge of youth activities in city. 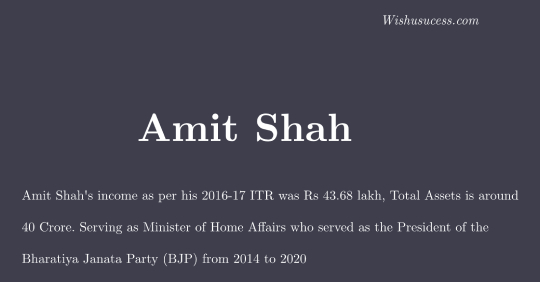 In July 2014, BJP's Central Parliamentary Board unanimously approved Shah's appointment as president of the party. He was reelected BJP President unanimously on 24 January 2016.

Under his leadership during 2014–16, BJP achieved success in Legislative Assembly elections in Maharashtra, Haryana, Jammu & Kashmir, Jharkhand and Assam, but lost the elections in Delhi and Bihar.

Shah led BJP to victory in the 2019 Indian general election, becoming the most successful BJP President ever, in the process. During the election campaign, he visited 312 of the 543 Lok Sabha constituencies, holding 18 roadshows, 161 public meetings, and over 1,500 BJP meetings.

He is often referred to as a modern-day Chanakya, who had skillfully replaced the Nanda dynasty by the young Chandragupta Maurya.

He is an admirer of Chanakya. Responding to the questions from a reporter about a portrait of Chanakya at his New Delhi residence in 2016, he said: "[I admire] Chanakya because he was knowledgeable.

His sutras are eternal. Economics, politics, the problem of governance are all there.” The Bhagavata Purana is another of his favorite books, which he studied when he was in prison.

On 5 August 2019, Shah moved resolution to scrap Article 370 in the Rajya Sabha.,[39] and also reorganize the state with Jammu and Kashmir serving as one of the union territory and Ladakh region separated out as a separate union territory.

In September 2019, Shah talked about India needs one unifying language, saying that the Hindi language to unite the country and said that it is necessary to have one language which could represent India in the world. In a tweet, he also appealed the Indians to increase the usage of Hindi language.