Anil Dhirubhai Ambani (born 4 June 1959) is an Indian businessman. He is the chairman of Reliance Group (also known as Reliance ADA Group), which was created in July 2006 following a demerger from Reliance Industries Limited. He leads a number of stock listed corporations including Reliance Capital, Reliance Infrastructure, Reliance Power and Reliance Communications. Ambani, once the sixth richest person in the world, declared before a UK court in February 2020 that his net worth is zero and he is bankrupt. He was elected to the Rajya Sabha, upper house of the Parliament of India from Uttar Pradesh as an Independent. 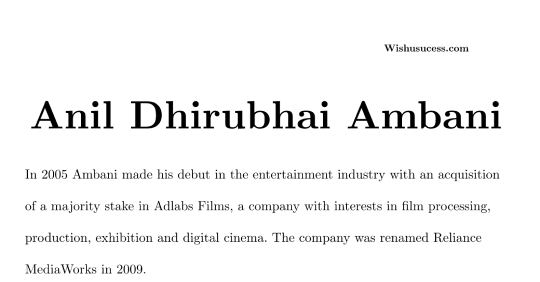 His major business interests in entertainment include 44 FM radio stations, nationwide DTH business, animation studios, and several multiplex cinemas throughout India. After his father's death in 2002, Anil Ambani took over the reins of Reliance Group with interests in telecom, entertainment, financial services, power and infrastructure. Ambani is also credited with India's largest IPO, that of Reliance Power, which in 2008 was subscribed in less than 60 seconds, the fastest in the history of Indian capital markets to date.

In 2005 Ambani made his debut in the entertainment industry with an acquisition of a majority stake in Adlabs Films, a company with interests in film processing, production, exhibition and digital cinema. The company was renamed Reliance MediaWorks in 2009.

In 2008 a joint venture worth US$1.2 billion with Steven Spielberg's production company DreamWorks cast Ambani's entertainment business on to a global platform. He has contributed to the production of a number of Spielberg films, including the Academy Award-winning Lincoln.

Net Worth: US$9 million in assets against $300 million in liabilities (February 2020)

Ambani has said that his father would lead the brothers on “incentive-oriented outings” where they would be rewarded a box of mangoes for a 10-km hike, but also punished them for acting out in front of guests. He earned his Bachelor of Science degree from Kishinchand Chellaram College and received a Master in Business Administration at the Wharton School of the University of Pennsylvania in 1983.

Ambani is a Gujarati. He is married to Indian actress Tina Munim, and they have two sons, Jai Anmol Ambani and Jai Anshul Ambani. Ambani is the younger brother of Mukesh Ambani and has two sisters, Nina Bhadrashyam Kothari and Dipti Dattaraj Salgaocar.

In early 2019, a court in Mumbai held Ambani in criminal contempt for non-payment of personally guaranteed debt Reliance Communications owed to Swedish gearmaker Ericsson. Instead of jail time, the court gave him a month to come up with the funds. At the end of the month, Ambani was bailed out by his older brother, Mukesh Ambani.

In 2018, India's principal opposition party, Indian National Congress, accused Prime Minister Narendra Modi of favouring Anil Ambani's defence manufacturing company over HAL, a public sector enterprise, in a fighter aircraft deal worth INR 58,000 crores with French manufacturing firm Dassault. Ambani, several of whose companies are debt-ridden, has denied all charges of benefiting from crony capitalism. In factual terms, Reliance Defence stood to get just over 3 per cent of the Rs 30,000-crore Dassault Aviation offsets contract, contrary to the impression that it was to be the biggest beneficiary of the Rafale fighter jet deal.

In a possibly related controversy, one of his businesses partly financed a French film in which former French president Francois Hollande's then-partner had acted around the same time the aircraft deal was being negotiated.

He gained notoriety as one of the fastest destroyers of shareholder wealth in the last 100 years with the combined group market cap declining by 90% since the formation of the Reliance ADA group.

In February 2020, Anil Ambani was locked in a legal battle with 3 Chinese banks. He was asked to set aside $100mn by the court which led him to make the statement that his net worth is currently zero after taking into account his liabilities. The dispute still rages on with the UK court ordering him to pay the 3 Chinese banks to the tune of $716mn.