Atal Bihari Vajpayee was born 25 December 1924 and passed away at 16 August 2018. His mother and father were Krishna Devi and Krishna Bihari Vajpayee. His father was a school teacher in their home town. His grandfather, Shyam Lal Vajpayee, had migrated to Morena near Gwalior from his ancestral village of Bateshwar in the Agra district of Uttar Pradesh.

He was an Indian politician, statesman and poet. He served three terms as the Prime Minister of India, first for a term of 13 days in 1996, then for a period of 13 months from 1998 to 1999, followed by a full term from 1999 to 2004. A member of the Bharatiya Janata Party (BJP), he was the first Indian prime minister not of the Indian National Congress party to have served a full five-year term in office.

He was a member of the Indian Parliament for over five decades, having been elected ten times to the Lok Sabha, the lower house, and twice to the Rajya Sabha, the upper house. He served as the Member of Parliament for Lucknow, retiring from active politics in 2009 due to health concerns. He was among the founding members of the Bharatiya Jana Sangh (BJS), of which he was president from 1968 to 1972. The BJS merged with several other parties to form the Janata Party, which won the 1977 general election.

In March 1977, Vajpayee became the Minister of External Affairs in the cabinet of Prime Minister Morarji Desai. He resigned in 1979, and the Janata alliance collapsed soon after. Former members of the BJS formed the BJP in 1980, with Vajpayee its first president. 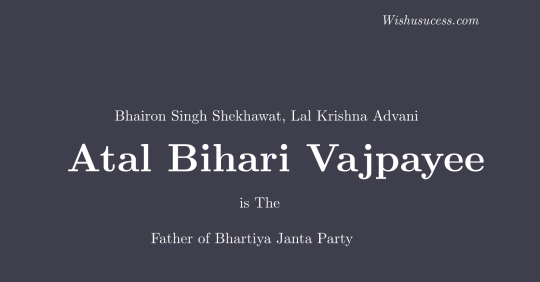 The administration of Narendra Modi declared in 2014 that Vajpayee's birthday, 25 December, would be marked as Good Governance Day. In 2015, he was conferred India's highest civilian honour, the Bharat Ratna, by the President of India, Pranab Mukherjee. He died on 16 August 2018 of age-related illness.

In 2012, Vajpayee was ranked number 9 in Outlook magazine's poll of The Greatest Indian.

In August 2018, Naya Raipur was renamed as Atal Nagar.

In October 2018, four Himalayan peaks near Gangotri glacier named after his name.

Vajpayee authored several works of both prose and poetry. Some of his major publications are listed below. In addition to these, various collections were made of his speeches, articles, and slogans.

India's Perspectives on ASEAN and the Asia-Pacific Region (2003)

Meri Ikyavana Kavitaem (1995). Some of these poems were set to music by Jagjit Singh for his album Samvedna.

An English translation of a selection of some of Vajpayee's

Hindi poetry was published in 2013.