Established in 1875, it is Asia's oldest stock exchange. The BSE is the world's 10th largest stock exchange with an overall market capitalization of more than $2.2 trillion on as of April 2018. 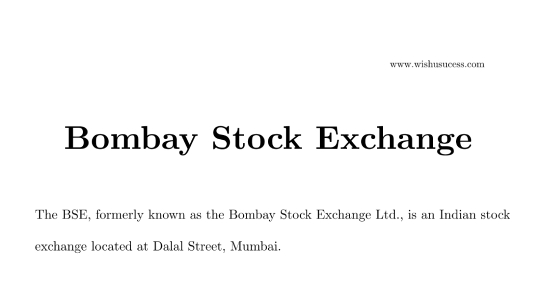 While BSE Ltd is now synonymous with Dalal Street, it was not always so. In 1850s, five stock brokers gathered together under Banyan tree in front of Mumbai Town Hall, where Horniman Circle is now situated. A decade later, the brokers moved their location to another leafy setting, this time under banyan trees at the junction of Meadows Street and what was then called Esplanade Road, now Mahatma Gandhi Road. With a rapid increase in the number of brokers, they had to shift places repeatedly. At last, in 1874, the brokers found a permanent location, the one that they could call their own. The new place was, aptly, called Dalal Street (Brokers' Street). The brokers group became an official organization known as "The Native Share & Stock Brokers Association" in 1875.

On August 31, 1957, the BSE became the first stock exchange to be recognized by the Indian Government under the Securities Contracts Regulation Act. In 1980, the exchange moved to the Phiroze Jeejeebhoy Towers at Dalal Street, Fort area. In 1986, it developed the S&P BSE SENSEX index, giving the BSE a means to measure the overall performance of the exchange. In 2000, the BSE used this index to open its derivatives market, trading S&P BSE SENSEX futures contracts. The development of S&P BSE SENSEX options along with equity derivatives followed in 2001 and 2002, expanding the BSE's trading platform.

Historically an open outcry floor trading exchange, the Bombay Stock Exchange switched to an electronic trading system developed by CMC Ltd. in 1995. It took the exchange only 50 days to make this transition. This automated, screen-based trading platform called BSE On-Line Trading (BOLT) had a capacity of 8 million orders per day. Now BSE has raised capital by issuing shares and as on 3 May 2017 the BSE share which is traded in NSE only closed with Rs.999.

The BSE is also a Partner Exchange of the United Nations Sustainable Stock Exchange initiative, joining in September 2012.