BYJU’S - The Learning App is the common brand name for Think and Learn Private Ltd., an Indian educational technology (edtech) and online tutoring firm founded in 2011 by Byju Raveendran at Bangalore. In March 2019, it was the world's most valued edtech company at $5.4 billion (Rs 37,000 crore). Byju's has claimed on 27 May 2020 that they have gained Rs. 2,800cr revenue in FY20. 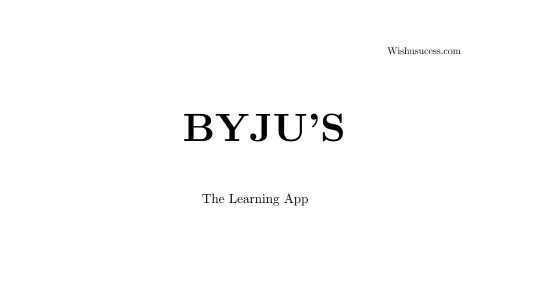 BYJU’S runs on a freemium model. Free access to content is limited to 15 days after the registration.

Their main product is a mobile app named BYJU'S-The Learning App launched in August 2015. It provides educational content mainly to school students from class 1 to 12 (primary to higher secondary level education). The company trains students for examinations in India such as IIT-JEE, NEET, CAT, IAS as well as for international examinations such as GRE and GMAT.

The main focus is on mathematics and science, where concepts are explained using 12-20 minute digital animation videos. BYJU'S reports to have 40 million users overall, 3 million annual paid subscribers and an annual retention rate of about 85%. The app purports to tailor the content provided to the individual student's learning pace and style. The average student spends 53 minutes daily using BYJU'S.

The company announced that it will launch its app in regional Indian languages in 2019. It also plans to launch an international version of the app for English-speaking students in other countries in 2019. Recently, Byju's launched new programs in its Early Learn App for students of LKG and UKG as well.

BYJU’S app was developed by Think and Learn Pvt Ltd, established by Byju Raveendran in 2011. Raveendran, who was trained as an engineer, started coaching students to pass mathematics exams in 2006. In 2011 he founded an educational company with the help of his students offering online video-based learning programs for the K-12 segment as well as competition exams. In 2012 Think and Learn entered both Deloitte Technology Fast50 India and Deloitte Technology Fast 500 Asia Pacific ratings and has been present there ever since.

In August 2015, after 4 years of developments, the firm launched BYJU’S The Learning App. The app was downloaded by more than 2 million students within the first 3 months since its launch. In December 2016, the app was among "Best Self Improvement" apps at Google Play India rating.

In July 2017, Think and Learn acquired TutorVista (including Edurite) from Pearson.

In January 2019, BYJU’S acquired a US-based Osmo, a maker of educational games for children aged 3–8 years for $120 million.

Byju’s is in advanced stages of talks to acquire Doubtnut, a two-year-old education learning app in 2020.

As per the company filings with the Ministry of Corporate Affairs, BYJU’S became a unicorn and is valued at US$1 billion (INR 6,505 Crore) as of March 2018.

In June 2020, Byju's attained the decacorn status with an investment by Mary Meeker's Bond Capital.

BYJU'S operates roughly on a premium business model where a paid subscription is required for most of the content. In 2017, BYJU's generated revenues of about 260 crore (US$40 million or €33 million) and doubled it 2018 financial year, earning 520 crore. BYJU’S has targeted a revenue of 1400 crores for 2019 financial year.

In June 2020, with the investment of BOND, a global technology investment firm, BYJU's became decacorn at $10.5 Billion USD valuation.

BYJU'S was ordered to pay Rs 52,000 as compensation to Dinesh Kumar of Aminjikarai. BYJU'S advertisement had promised that classes were scheduled to commence in the first week of December 2016. But, the classes started one month later in January 2017 at Anna Nagar with no infrastructure and no faculty and the venue was changed thrice.