The current president is Sylvain Laporte, who took the position March 9, 2015. The CSA's headquarters are located at the John H. Chapman Space Centre in Longueuil, Quebec. The agency also has offices in Ottawa, Ontario, at the David Florida Laboratory, and small liaison offices in Houston; Washington, D.C.; and Paris. 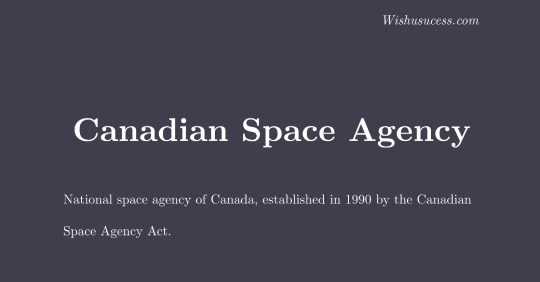 The origins of the Canadian upper atmosphere and space program can be traced back to the end of the Second World War Between 1945 and 1960, Canada undertook a number of small launcher and satellite projects under the aegis of defence research, including the development of the Black Brant rocket as well as series of advanced studies examining both orbital rendezvous and re-entry.

In 1957, scientists and engineers at the Canadian Defence Research Telecommunications Establishment (DRTE) under the leadership of John H. Chapman embarked on a project initially known simply as S-27 or the Topside Sounder Project. This work would soon lead to the development of Canada's first satellite known as Alouette 1.

With the launch of Alouette 1 in September 1962, Canada became the third country to put an artificial satellite into space.

The technical excellence of the satellite, which lasted for ten years instead of the expected one, prompted the further study of the ionosphere with the joint Canadian-designed, U.S.-launched ISIS satellite program.

This undertaking was designated an International Milestone of Electrical Engineering by IEEE in 1993. The launch of Anik A-1 in 1972 made Canada the first country in the world to establish its own domestic geostationary communication satellite network.

The mandate of the Canadian Space Agency is to promote the peaceful use and development of space, to advance the knowledge of space through science and to ensure that space science and technology provide social and economic benefits for Canadians. The Canadian Space Agency's mission statement says that the agency is committed to leading the development and application of space knowledge for the benefit of Canadians and humanity.

In 1999 the CSA was moved from project-based to "A-base" funding and given a fixed annual budget of $300 million. The actual budget varies from year to year due to additional earmarks and special projects. In 2009, Dr. Nicole Buckley was appointed Chief Scientist of Life Science.

The Mobile Base System just before Canadarm2 installed it on the Mobile Transporter during STS-111
The Canadian space program is administered by the Canadian Space Agency.

Canada has contributed technology, expertise and personnel to the world space effort, especially in collaboration with ESA and NASA.

In addition to its astronauts and satellites, some of the most notable Canadian technological contributions to space exploration include the Canadarm on the Space Shuttle and Canadarm2 on the International Space Station.

The Canadarm, Canadarm2 and Dextre all employ the Advanced Space Vision System, which allows more efficient use of the robotic arms.

Another Canadian technology of note is the Orbiter Boom Sensor System, which was an extension for the original Canadarm used to inspect the Space Shuttle's thermal protection system for damage while in orbit.

Before the Space Shuttle's retirement, the boom was modified for use with Canadarm2; STS-134 (the Space Shuttle program's penultimate mission) left it for use on the ISS.

Cooperation with the European Space Agency

The CSA has been a cooperating state of the European Space Agency (ESA) since the 1970s and has several formal and informal partnerships and collaborative programs with space agencies in other countries, such as NASA, ISRO, JAXA, and SNSA.

From 1968, Canada held observer status in the European Space Conference (ESC), a ministerial-level organization set up to determine future European space activities, and it continued in this limited role after ESA was created in 1975.

Since January 1, 1979, Canada has had the special status of a "Cooperating State" with the ESA, paying for the privilege and also investing in working time and providing scientific instruments that are placed on ESA probes. Canada is allowed to participate in optional programs; it also has to contribute to the General Budget but not as much as associate membership entail. This status was unique at the time and remains so today.