Anna University is a public state university located in Tamil Nadu, India. The main campus is in Guindy, Chennai and the satellite campus is in Chromepet, Chennai. It was established on 4 September 1978. The main campus houses the College of Engineering, Guindy; Alagappa College of Technology, School of Architecture and Planning, and three technical departments of the University of Madras. The Madras Institute of Technology campus is located in Chromepet. 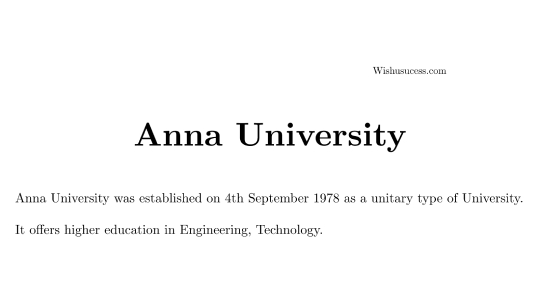 In 2011 and 2012 the constituents were merged back to a single affiliating university and the four regional universities continue to function as regional campus of the university.

A common entrance test – the Tamil Nadu Professional Courses Entrance Examination (TNPCEE) — was used as a basis for admission to professional courses in the state until 2006. Starting in the academic year 2007–08, students were admitted to engineering colleges on the basis of their higher secondary marks. Post graduate admission process is carried out through TANCET and GATE scores."Admission for PG in CEG".

The university offers courses in engineering and technology through its affiliated colleges and follows a dual semester system. Every year the university conducts examinations for even semester in May–June and for odd semester in November–December. The first semester students have exams in January.

Internationally, Anna University was ranked 751-800 in the QS World University Rankings of 2020. The same rankings ranked it 169 in Asia in 2020 and 87 among BRICS nations in 2019. It was ranked 20th in India overall by the National Institutional Ranking Framework in 2020, 12th among universities, 14th in the engineering ranking and 59th in the management ranking.

The university's main campus is in Chennai and extends over 185 acres adjoining the Adyar River and the Raj Bhavan. It houses College of Engineering, Guindy, Alagappa College of Technology, School of Architecture and Planning, three technical departments of the University of Madras. Another campus is in Chrompet (Madras Institute of Technology).

The university has satellite campuses in Coimbatore, Tiruchirappalli, Madurai and Tirunelveli. The university also runs engineering colleges at Villupuram, Tindivanam, Arani and Kanchipuram in Chennai region, Erode and Bargur in Coimbatore region, Panruti, Pattukkottai, Thirukkuvalai and Ariyalur in Tiruchirapalli region, Ramanathapuram and Dindigul in Madurai region, Nagercoil and Thoothukudi in Tirunelveli region.

ISRO has permitted Anna University to start a separate TV channel. The university has established Tamil Nadu's first interactive satellite terminal under the Ku Band of EDUSAT. Anna University Microsatellite ANUSAT is an Indian student-built microsatellite. ANUSAT is the first satellite designed and developed by an Indian university and is the first satellite in India to be built and operated by any organisation other than ISRO. It carries a primary store and forward payload and auxiliary technology demonstration payloads. It was launched aboard PSLV-C12 on 20 April 2009. The satellite's development was sponsored by the Indian Space Research Organisation (ISRO).