The Bihar Public Service Commission (BPSC) is a body created by the Constitution of India to select applicants for civil service jobs in the Indian state of Bihar according to the merits of the applicants. 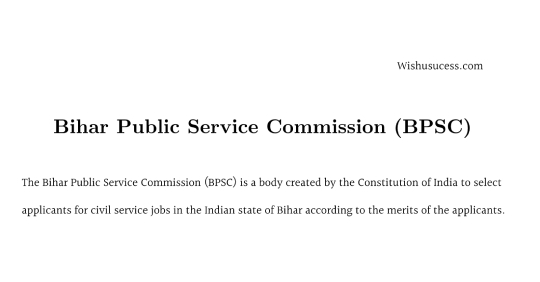 Article 320 and 321 of the Constitution of India prescribes the mandate of the State Public Service Commissions, which are:

a) Recruitment by the conduct of Competitive Examinations/ through interviews to the services of the State Government.

b) Advising the State Government on the suitability of officers on appointment on promotion as well as transfer from one service to the other.

c) Advising the State Government on the matters related with recruitment to various services and posts, framing and amendment of Recruitment Rules.

e) Advising the State Government in the matter of grant of extraordinary pension, reimbursement of legal expenses, etc.

f) Advising the State Government on any matter referred to the Commission by the Governor of Bihar.

Recruitment is made by two methods

Direct Recruitment:- Direct recruitment is made mainly by way of conducting the competitive examination in which the selection is done on the basis of either of the following procedures.
a)Main (Written) Examination and Interview of the successful candidates of the Preliminary Test prescribed under rules..

Promotion:- Promotion is granted to civil servants through the Departmental Promotion Committee (under the chairmanship of the Commission) constituted for the same and in accordance with the rules framed by the State Government.

Organization Profile: MHRD has identified this UT of DNH having less than 6 % GER (Gross Enrollment Ratio) and having huge population of SC/ST/Minority and weaker population. Therefore it was necessary to setup a Degree College in this U.T
Job Title: Assistant Professor
Employment Type: Full Time

Qualification: As per UGC Regulations (with NET/SET/SLET or Ph.D.) with a minimum of 55% marks at the Master’s level. Candidates, who are or have been awarded a Ph.D. degree in accordance with the University Grants Commission (Minimum Standards and Procedure for award of Ph.D. Degree) Regulation, 2009, shall be exempted from the requirements of minimum eligibility condition of NET.

How to Apply: The application complete in all respect and with necessary documents shall reach the following address.

Organization Profile: Institute of Physics, Bhubaneswar is an autonomous research institution funded jointly by the Department of Atomic Energy (DAE) and the Government of Odisha. The Institute was officially established in 1972 by the Government of Orissa and registered in 1972 as a registered society under Societies Registration Act 1860. The Institute started functioning under the directorship of Prof. T. Pradhan on September 4, 1974, in two rented rooms of the Utkal University Guest House.

Qualification: At least two years of post-doctoral experience. He should have good quality publications in refereed journals and his work should show his ability to carry out independent research.

How to Apply: Interested Indian nationals with appropriate background and capabilities and a strong aptitude for independent research may e-mail their application (in pdf format) to the following email id.

Organization Profile: With a coastline of about 3,500 miles, inland sources in Rajasthan and Little Rann of Kutch, and the rock salt mines in Mandi, India have possibilities of attaining a high position in salt production among the salt-producing countries of the world. As is known, apart from being an indispensable item of food, salt is an important raw material for the manufacture of several heavy chemicals e.g. soda ash, caustic soda, and chlorine. Besides, salt is used in food processing industries, such as fish curing, meat packing, dairy products and fruit, and vegetable canning.

Title of the project: Production of Nanocarriers for theranostics

Period of Engagement: This position is purely temporary for the duration of the project. Therefore, it would not confer any right/claim, implicit or explicit, for any candidate for claiming extension or absorption in CSIR-CSMCRI. The initial appointment is for one year.

Organization Profile: Swami Vivekanand Educational Society, (Regd.) Hamirpur (H.P.) society has the following office bearers who are dedicated to make Swami Vivekanand College of Education goal-oriented. To open this institution in such a remote and rural part of Himachal Pradesh is itself a commendable job. The governing body is highly qualified and aware of the significance of education.

How to Apply: Interested candidates may apply through email id given below within 21 days.

Organization Profile: St. Francis Institute of Management & Research (SFIMAR) was established in 2002 by “The Society of the Congregation of Franciscan Brothers”; to impart quality education in the field of Business Management. It is recognized by AICTE, New Delhi and has been granted permanent affiliation by the University of Mumbai. SFIMAR is an ISO 9001:2015 Certified Institute and also recognized under Section 2 (f) & 12 (B) of UGC Act 1956.

Pay Scale: As per AICTE/DTE/University of Mumbai Norms

How to Apply: Interested and Eligible candidates requested to send the application with full details along with CV, all necessary documents and passport size photograph to following postal Address within 15 days.

Nehru Group of Institutions – Tamil Nadu and Kerala invite application from professionals with Industry and academic experience for the post of Principal for our Engineering Colleges / Professor /Associate Professor / Assistant Professor in the following streams.

Organization Profile: Nehru College of Educational and Charitable Trust, established at an auspicious moment in the year 1968, with the primary objective of rendering selfless, dedicated and yeomen service to cause of higher education originally in the field of Aeronautical Engineering and subsequently in the field of rest of engineering branches, Management, Arts, Science, and Paramedical Sciences and has added feather after feather to its Cap. Its educational service to the poor underprivileged and downtrodden in the society is freely accessed and widely appreciated by the people, especially from Tamil Nadu and Kerala.

Qualification: M.E/M.Tech/MBA/M.Pharm/Ph.D. and as per AICTE norms

Salary: As per norms

Last Date: As soon as possible

How to Apply: Interested and Eligible candidates may apply for the above post through the following link.

Organization Profile: Amrita Vishwa Vidyapeetham is a multi-campus, multi-disciplinary research university that is accredited ‘A’ by NAAC and is ranked as one of the best research universities in India. The university is spread across five campuses in three states of India – Kerala, Tamil Nadu and Karnataka, with the University headquarters at Ettimadai, Coimbatore, Tamil Nadu.

Qualification: PG and Ph.D. and relevant experience will be an added advantage.

Qualification: Ph. D. from a reputed university with first class or equivalent in the preceding degree appropriate branch, with an excellent academic record, good communication skills, and evidence to suggest an ability to pursue independent high-quality research.

Experience: Atleast 3 – 6 years teaching/research/professional experience excluding the experience gained while pursuing Ph. D. Candidates should be highly motivated towards teaching and research and should have demonstrated research capabilities in terms of publications in reputed journals and referred conferences. Fresh Ph. D. candidates with less than 3 years of relevant experience may be considered for Assistant Professor within the appropriate scale of pay. The requirements of minimum qualification and/ or experience may be relaxed in case a candidate is found to have outstanding credentials. All candidates are requested to be with good programming skills. Experience in Industry will be an added advantage.

Pay Scale: As per UGC norms

How to Apply: Interested and eligible candidates may pls send their resumes to the following email id.

Job Post Date: 2nd July 2020
Khalsa College Amritsar has advertised in TRIBUNE newspaper for recruitment of Teaching Faculty Assistant Professor jobs vacancies. Interested and eligible job aspirants are requested to apply with in 17th July 2020.Check out further more details below.
Name of the College: Khalsa College Amritsar
College Profile: Khalsa College is a historic educational institution in the northern Indian city of Amritsar in the state of Punjab, India

Name of the Posts:

Organization Profile: Monti International Institute of Management Studies (MIIMS) at Puthanangadi, Angadippuram, Malappuram (Dist) in Kerala is managed by the Sons of Immaculate Conception of India. This B School is affiliated to the University of Calicut and imparts two years full-time MBA. The MBA program at MIIMS is a life-transforming experience. MIIMS approved by AICTE New Delhi and is affiliated to University of Calicut.

Qualification: As per AICTE norms

How to Apply: Interested and Eligible candidates may send the application to the following email id.