Internship students used to develop central chinmaya mission trust website and mobile applications in 2016-2017. And there were teams dedicated to each technology that developed new features related to them. There are total 8 members including team lead and manager in the team, total 6 students were working as a internship. CCMT developer team has total 8 members in 2016-2017.

Chinmaya Mission is a very well known trust which has many branches, whose purpose is to share happiness with maximum people to maximum time. This trust has many school colleges and universities also among them chinmaya vishwavidyapeeth is very good universities in kerala. 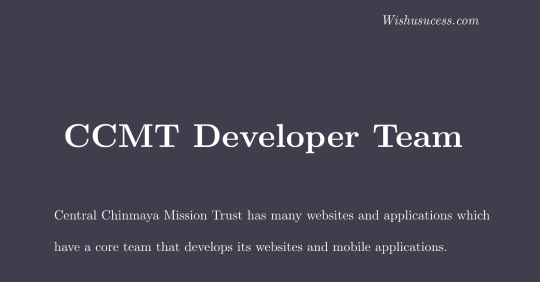 The Chinmaya Mission is a Hindu religious and spiritual organization engaged in the dissemination of Vedanta, the science of the self as expounded in the Vedas, particularly the Upanishads, and other Hindu scriptures such as the Bhagavad Gita. Head office of Central Chinmaya Mission Trust (CCMT) located in powai, Mumbai.

The Chinmaya Mission was established in India in 1953 by devotees of the renowned Vedanta teacher Swami Chinmayananda Saraswati.

There are over 313 mission centres all over India and abroad. North America had more than 30 centres.

The motto of Chinmaya Mission is "to give maximum happiness to maximum people for maximum time."

Foundation:  Swami Chinmayananda Saraswati, the founder of Chinmaya Mission, taught spirituality as the art of living.

Through jnana yoga (the Vedantic path of spiritual knowledge), he emphasized the balance of head and heart, pointing out selfless work, study, and meditation as the cornerstones of spiritual practice.

Doubting the teachings of the sages in the Himalayas, Balakrishna Menon met Swami Sivananda (Divine Life Society), who initially guided him in spiritual studies and then placed him under the tutelage of Swami Tapovanam (Tapovan Maharaj), with whom he pursued spiritual studies for nine years. He eventually came to share this Vedantic knowledge with the masses, in the form of the dynamic teacher known as Swami Chinmayananda.

Swamiji is a teacher of Srimad Bhagavad Gita. He is often credited with the renaissance of spirituality and cultural values in India, and with the spreading of Advaita Vedanta, as expounded by Adi Shankaracharya, throughout the world.

The following activities are conducted at mission centers on a weekly basis:

Bala Vihar: Bala Vihar is a program in which children from age five to eighteen meet on a weekly basis to learn about Hindu culture, customs, and philosophy.

Bala Vihar is a program that is conducted throughout the world, not just in India, from countries such as the United States, UK, and Australia.

Some centers also have a version called Sishu Vihar, which is meant for children aged 2 to 4.

CHYK conducts many camps and sessions throughout the world. CHYK West is a similar organization that operates in the West (United States, UK, etc.).

Environment related: Chinmaya Mission, Sikkim Centre has established CHINMAYA SMRITI VANAM at Bulbuley, Gangtok, Sikkim, India in 1995 and have planted till now more than 10,000 ( ten thousand ) trees sapling most of which have grown now into full trees.

Most Famous and Richest Temples in India 2020

India is quite a picturesque country from a historical point of view. When the travelers coming to India see the beauty here, the mantras become enchanted. There are a huge range of historical monuments, forts, palaces, temples in India. And it is the beauty of India that reflects India's past. India there is lot of beautiful temple which speak volumes about the amazing history of this country. Travelers travels the India to explore the beauty of its historical places and beautiful temple. There are a large number of famous temples in India that travelers can visit to explore their beauty. Some of these temples were built way long back and many of them are believed to have mystery of their own. These temples give a vibrant insight into the history of the period they were constructed. Among all, there are few temples, which are believed to be the richest temples in India. In this article, we have mentioned about some of those.

This temple is most visited temple in the India which earns Rs 500 crore annually.

This is one of the most beautiful temple in India, The temple's canopy is made of gold and the altar on which the holy book of Guru Granth Sahib is placed is studded with diamonds and other precious stones.

This temple is one of the most famous Hindu temple, Kashi Vishvanath Temple is the Lord Shiva temple and one of the twelve Jyotirlingas in India. The temple is located in Varanasi and one of the holiest and most venerated temples of India.

The annual donation of the temple is around Rs 4-5 crore.

The richest temple in Gujarat has an annual revenue of Rs 33 crore.