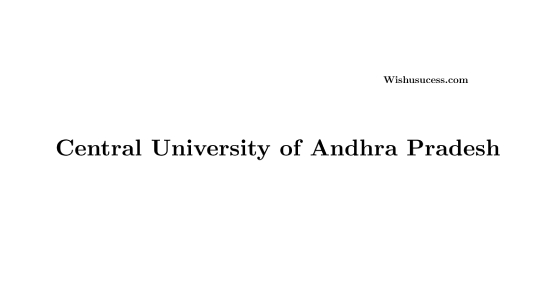 In 2014 the bifurcation of Andhra Pradesh was enacted through the Andhra Pradesh Reorganization Act, 2014. The act mandated the Government of India to establish Institutes of National Importance, one of which to be a central university, in the residual state of Andhra Pradesh. The union cabinet has approved the university in May 2018, sanctioning ₹450 crore (US$63 million) to the project. The University of Hyderabad (UoH) has been selected to mentor the new university in June 2018. A bill was approved in July 2018 and the transit campus of the university, at the IT Business Incubation Centre, Jawaharlal Nehru Technological University, Anantapur, was inaugurated in August 2018. 491.3 acres (198.8 ha) of land were assigned for building a permanent campus. The Central Universities (Amendment) Bill, 2019 was introduced to the Lok Sabha in July 2019 and passed in both houses in that same month. The Central Universities (Amendment) Act, 2019 was published in August 2019, officially establishing the university.

CUAP offers courses towards B.A. (Hons.) and B.Sc. (Hons.) degrees in various fields of arts, humanities and social sciences. It also offers various B.A. (vocational studies) courses and M.A. degrees in languages. the programmes are semester based and use the Choice Based Credit System (CBCS).