The Civil Services Examination (CSE) is a nationwide competitive examination in India conducted by the Union Public Service Commission for recruitment to various Civil Services of the Government of India, including the Indian Administrative Service, Indian Foreign Service, and Indian Police Service. Also simply referred to as the UPSC examination, it is conducted in three phases - a preliminary examination consisting of two objective-type papers (General Studies Paper I and General Studies Paper II also popularly known as Civil Service Aptitude Test or CSAT), and a main examination consisting of nine papers of conventional (essay) type, in which two papers are qualifying and only marks of seven are counted followed by a personality test (interview). 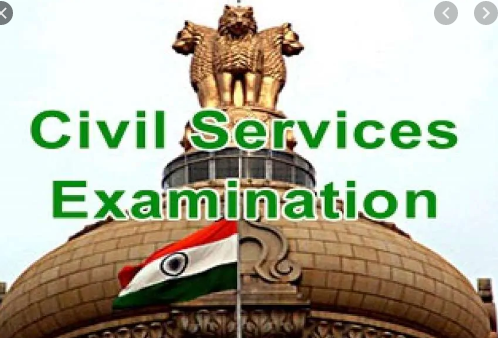 Purpose: Selection of candidates to the various posts of Civil Services of India

Offered: Once a year

Languages: Question paper is only given in Hindi or English. Answers can be given in any one of the scheduled languages of India
Annual number of test takers Decrease ≈ 1 million per year appears in Preliminary exam

Prerequisites / eligibility criteria: Must be a graduate, and an Indian citizen.

Fee: ₹ 100/- (for general male candidates). For other categories of candidates, the registration fee is exempted.

Scores / Grades: used by Union Public Service Commission for the selection of the students to the various Civil Services of India

The Civil Services Examination is based on the British era Imperial Civil Service tests, as well as the civil service tests conducted by old Indian empires such as the Mauryan Empire and Mughal Empire. It is considered to be the most difficult competitive examination in India. A single attempt takes two complete years of preparation - one year before the prelims and one year from prelims to interview. In total, one sits in actual exam for 32 hours from prelims till interview. On average, 900,000 to 1,000,000 candidates apply every year and the number of candidates sitting in the preliminary examination is approximately 550,000. Results for the Prelims are published in mid-August, while the final result is published in May of the next year.

Stage I: Preliminary Examination - Held in June every year. Results are announced in August.

Examination - Held in October every year. Results are announced in January.

Personality Test (interview) - Held in March. Final results are usually announced in May.

The training program for the selected candidates usually commences the following September.

Eligibility for the examination is as follows:

For other services, the candidate must be one of the following:

All candidates must have as a minimum one of the following educational qualifications:

The following candidates are also eligible, but must submit proof of their eligibility from a competent authority at their institute/university at the time of the main examination, failing which they will not be allowed to attend the exam.

For Other Backward Castes (OBC) the upper age limit is 35 years.
For Scheduled Castes (SC) and Scheduled Tribes (ST), the limit is 37 years.

For Defence Services Personnel disabled in operations during hostilities, the limit is 40 years.

For Candidates belonging to ex-servicemen including Commissioned officers and ECOs/SSCOs who have rendered military services for at least five years as on 1 August, of the year and have been released
on completion of assignment (including those whose assignment is due to be completed within one year from 1 August of the year otherwise than by way of dismissal or discharge on account of misconduct or inefficiency or

Relaxation of up to a maximum of five years will be given in the case of ECOs/SSCOs who have completed an initial period of assignment of five years of Military Service as on 1 August of the year and whose assignment has been extended beyond five years and in whose case the Ministry of Defence issues a certificate that they can apply for civil employment and that they will be released on three months' notice on selection from the date of receipt of offer of appointment, the limit is 32 years.

For ECOs/SSCOs who have completed an initial period of assignment of five years of Military Service, the limit is 32 years.

For PwD candidates, the limit is 37 years.

The number of times a candidate can appear for the exam are given below.

Following are the services which one gets on qualifying the Civil Service Examination.

The pattern of the Preliminary examination up to 2010 was based on the recommendations of the Kothari Commission (1979). It included two examinations, one on general studies worth 150 marks, and the second on one of 23 optional subjects worth 300 marks. Until 2011, when it was revamped, the preliminary pattern was sustained with only minor changes once every ten to fifteen years.

From 2011 onwards, the preliminary examination intends to focus on analytical abilities and understanding rather than the ability to memorize. The new pattern includes two papers of two hours duration and 200 marks each. Both papers have multiple choice objective type questions only. They are as follows:

Paper II (also called CSAT or Civil Services Aptitude Test), tests the candidate's skills in comprehension, interpersonal skills, communication, logical reasoning, analytical ability, decision making, problem solving, basic numeracy, data interpretation, English language comprehension skills and mental ability. It is qualifying in nature and the marks obtained in this paper are not counted for merit. However, it is mandatory for the candidate to score a minimum of 33 per cent in this paper to qualify the Prelims exam.

In August 2014, the Centre announced that English marks in CSAT will not be included for gradation or merit and 2011 candidates may get a second chance to appear for the test next year.

In May 2015, the Government of India announced that Paper II of the preliminary examination will be qualifying in nature i.e. it will not be graded for eligibility in Mains Examination and a candidate will need to score at least 33% to be eligible for grading on the basis of marks of Paper I of the Preliminary Examination. Those who qualify in the Prelims become eligible for the Mains.

The Civil Services Mains Examination consists of a written examination and an interview.

The Civil Services Main written examination consists of nine papers, two qualifying and seven ranking in nature. The range of questions may vary from just one mark to sixty marks, twenty words to 600 words answers. Each paper is of a duration of 3 hours. Candidates who pass qualifying papers are ranked according to marks and a selected number of candidates are called for interview or a personality test at the Commission's discretion.

According to the new marks allocations in Civil Service Examination 2013 there are some changes made in the examination according to the suggestion of the Prof. Arun. S. Nigavekar Committee. However, after some controversy, the qualifying papers for Indian languages and English were restored.