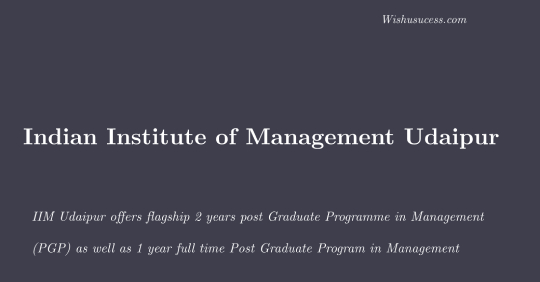 The Indian Institute of Management Udaipur, also known as IIMU, is a graduate business school in Udaipur, Rajasthan, India. Established as an autonomous body in 2011, the institute offers a two-year full-time MBA program, one-year postgraduate MBA programs (MBA-GSCM and MBA-DEM), a doctoral program and other management development programs. It is one of the seven Indian Institutes of Management set up by the central government during the Eleventh Five-Year Plan.

The institute is set in the picturesque backdrop of Udaipur, one of the busiest tourist attractions in India. The institute has been ranked in top 15 management institutes by Ministry of Human Resources Development released NIRF rankings in the past 3 years. The institute is one of the 9 institutes accredited by AACSB in India. IIMU is also ranked among the top 5 B-schools in India for research based on the methodology used by UT Dallas which tracks publications in 24 leading business journals. The institute is the youngest B-school in the world to be featured in the QS MIM 2020 and FT MIM 2019 rankings.

IIM Udaipur was inaugurated on 30 July 2011 by C. P. Joshi, Minister of Road Transport and Highways. The institute was one of the seven IIMs established by the Indian government. The institute offered its postgraduate program (PGP) to 57 students in its first year, and its postgraduate executive program (PGPX) at a temporary campus located at the Polymer Science Building of the Mohanlal Sukhadia University (MLSU), Udaipur.

Mr. Pankaj Patel, the Chairman and Managing Director of Zydus Cadila, was appointed the Chairman of the Board of Governors of the institute in January 2016. Mr. Patel took over from Mr. C.K.Birla, Chairman of Hindustan Motors. Prof. Janat Shah, an IIT Bombay and IIM Ahmedabad alumnus, who was working with IIM Bangalore at that time as a full-time faculty was appointed as the institute's Director at its inception.

IIM Udaipur became operational from 2011 in a temporary campus located at Polymer Science Building, Mohanlal Sukhadia University (MLSU), Udaipur, Rajasthan. Construction is completed at the 300 acre land in the Balicha area of Udaipur, Rajasthan, which has been allocated by the Government of Rajasthan for the institute's new Campus. Then honourable Union Minister for HRD, Smriti Irani inaugurated the campus in 2016.

The institute started functioning from the new campus post completion of the first phase in April 2016.

The campus of IIM Udaipur has been conceptualized and designed by noted architect BV Doshi who is the recipient of the prestigious Pritzker Architecture Prize. He has also designed the campus at IIM Ahmedabad and IIM Bangalore . The IIM Udaipur campus has been constructed on a region surrounding 2 hillocks, with the student hostels and faculty housing on each with the academic block connecting the two in the valley. The Academic block has lakes being built on both sides and has multiple courtyards which are inspired by the many chowks in Udaipur City. The campus plan for IIM Udaipur has been awarded 5-star rating by GRIHA in 2018.

The hostels consist of clusters of low rise courtyard houses, which have been constructed taking into account the hot climate of the region. Currently the first-year MBA students are given accommodation based on twin sharing basis, whereas a single accommodation facility is provided for students of the second year and those from other courses. All the hostels are centred around the Mess and are connected to a shared open space and a large open-air amphitheatre which is being constructed.

Residences for the permanent faculty consist of a series of low-rise single-storey and duplex structures built around private courts and larger shared gardens whereas visiting faculty and staff have been provided with modular apartments.

Since 2018, IIM Udaipur offers MBA degrees, the second IIM in the country to do so, following IIM Bangalore. The courses offered are, the regular two-year full-time residential program (MBA) and two one-year full-time residential MBA programs (MBA-GSCM and MBA-DEM). The institute also offers a doctoral-level PhD program, which usually has a duration of 4.5 to 5 years. IIM Udaipur's courses are accredited by AACSB.

MBA: The Masters in Business Administration (erstwhile known as Post Graduate Program(PGP) in Management) has been the flagship program of the Institute since its inception in 2011. The program is administered over 2 years in 6 trimesters with an internship at the end of the first year. The program aims to create socially responsible and highly skilled managers who can lead their organisations towards excellence. The teaching pedagogy followed by the institute consists of a mixture of Case studies, lectures, projects, simulations and business games. Apart from this, the course gives the students an all-round exposure using the International and Rural immersion modules.

One Year MBA in Global Supply Chain Management (MBA-GSCM)
This one year MBA (previously known as PGPX) is a full-time residential program in which students develop a specialization in the Logistics and Supply Chain Management area. The participants of this program have the option to spend an entire Semester at Purdue University and receive a dual degree.

IIM Udaipur began admissions for its Fellow Program in Management (FPM) since 2016. The program is for all the candidates who wish to pursue their career in original research. This program admits students in all conventional areas of Business Management like Marketing, Finance, Operations, Supply Chain and Human Resource Management.

MDP and other short term courses

In 2019, The Institute in collaboration with UCCI organised a MDP 'UCCI Emerging Leaders Programme 2019-20' for women in business. In addition to that, IIMU also completed with UCCI an MDP of ten months duration which was specifically catered towards family businesses. The Institute also ran a one-month 'Summer School for Future Leaders in Development' program which is geared towards professionals working in the Development and Public Policy space.

The institution has links with nine institutes across the world including EDHEC Business School, ESEG School of Management, KEDGE Business School, Ecole de Management Normandie in France; FAU Erlangen-Nurnberg , HHL Leipzig, EBS Oestrich-Winkel, WHU - Otto Beisheim School of Management in Germany and Purdue University in United States. Students who go to HHL Leipzig -Germany, EBS Oestrich-Winkel-Germany and WHU - Otto Beisheim School of Management can apply for DAAD for the scholarship. Students of the two-year MBA program go on their exchange program during the 5th term of the course. The students of the GSCM MBA program have an option to spend one semester at Purdue University, USA.

Indian Institute of Management Udaipur (IIMU) was ranked 17 in India by the National Institutional Ranking Framework (NIRF) management school ranking in 2020. It was ranked 8 in India by Outlook Magazine in 2020. It is ranked 76th (4th in India) in the Financial Times Global Ranking for Management, and is the youngest Indian B-School to be featured in the global rankings. It also features amongst the 6 Institutes based out of India to feature in QS Global Ranking for Management. Its MBA program is now in the 101+ category among the global 129 programmes from 28 countries.

Janat Shah, a fellow from IIM Ahmedabad and the former mentor of IIM Bangalore, is the Director at Indian Institute of Management Udaipur.

The IIM Udaipur Community is known to be a highly student-driven community. There are many student-run clubs and societies at IIM Udaipur. All the major events held on the campus are managed by the students themselves. The Council of Student Affairs (CSA) is an elected body which acts as the apex body of the student community.

The clubs are divided into professional clubs and social clubs, while committees like the Placement Committee and the Media and Industry Interaction Cell(MiiC) handle external relations. Professional clubs include the consulting club 'Consult-U', the HR club 'dHRuva', the finance club 'Finomina', the marketing club 'MarClan', the economics club 'PiE', the Entrepreneurship club 'Saksham', the SCM and operations club 'Skein' and the Analytics and IT Club 'Technalytics'. Social clubs include Code Red, the photography club 'IRIS', the literary club 'Potpourri', the social responsibility club 'Prayatna', the Toastmasters chapter 'Silvertongues', the dance club 'FootworX', the music society 'Octaves', the art community 'CreArT', the Bikers and Trekkers Club 'B.A.T' and the 'Public Policy Group' for policy enthusiasts.

Solaris: Solaris is the annual Management festival of the Institute. It is a two-day festival consisting of summits from multiple areas of Management like Finance, Economics, Operations and Analytics. The Leadership Summit is the flagship event of Solaris. Lieutenant General Satish Dua, PVSM, UYSM, SM, VSM; Piyush Pandey, Co-Executive Chairman, Ogilvy and Mather and Subir Gokarn, Deputy Governor, RBI and Executive Director, IMF are some of the notable luminaries who have spoken at Solaris.

The theme for the 5th edition of Solaris held in October 2019 was 'Success with Synergy'.

Audacity is the annual cultural festival of IIM Udaipur. It is a two-day event which comprises multiple fun events, competitions and shows by celebrities. The theme for sixth edition i.e. Audacity 2020 was 'Escape Reality'. Guru Randhawa and Rahul Subramanian were the notable celebrities who performed in Audacity 2020.

Utkrisht is the annual Sports festival of the Institute which is organised in January. Utkrisht '19 was the second year of the festival and saw the participation of multiple colleges for the plethora of sports events organised on the campus. The third edition of the annual marathon 'Udaipur Runs' was also organised with the theme 'Run with the Jawans'.

The Institute regularly organises guest lectures by notable leaders from the business world under the Netratva series. Harish Bhat, Brand Custodian, Tata Group; Suresh Narayanan, CMD, Nestle India are some of the notable speakers who have delivered their talks as a part of this series.

Other events and summits

Apart from the above events, IIM Udaipur organises multiple other events and summits throughout the year like Udaipur Litfest, 'Analytica', the Analytics summit; 'Spandan', the annual HR Summit and 'Prarambh', the B-plan competition event.

In December 2019, the Institute launched the first edition of the biannual 'Business Review' magazine.

Since 2017, the Institute in collaboration with Futurescope releases its annual 'Responsible Business Ranking' report.