The Government of India, often abbreviated as GoI, is the union government created by the constitution of India as the legislative, executive and judicial authority of the union of twenty eight states and nine union territories of a constitutionally democratic republic. It is located in New Delhi, the capital of India. 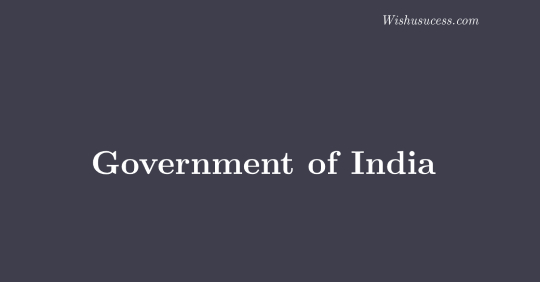 Seat: Rashtrapati Bhavan (Official Residence of the President of India.)

Executive of Government of India (GOI):

President: The executive power is vested mainly in the president of India, as per Article 53(1) of the constitution. The president has all constitutional powers and exercises them directly or through subordinate officers as per the aforesaid Article 53(1). The president is to act in accordance with aid and advice tendered by the prime minister, who leads the council of ministers as described in Article 74 of the Constitution of India.

Vice President: The vice president is the second highest constitutional position in India after the president.

The vice president also has the legislative function of acting as the chairman of the Rajya Sabha.

The vice president is elected indirectly by members of an electoral college consisting of the members of both the houses of the parliament in accordance with the system of proportional representation by means of the single transferable vote and the voting is by secret ballot conducted by the election commission.

Prime Minister: The Prime Minister of India, as addressed in the Constitution of India, is the chief of the government, chief adviser to the president, head of the council of ministers and the leader of the majority party in the parliament. The prime minister leads the executive of the Government of India.

The prime minister is appointed by the president to assist the latter in the administration of the affairs of the executive.

Cabinet, Ministries And Agencies: The Cabinet of India includes the prime minister and cabinet ministers. Each minister must be a member of one of the houses of the parliament.

The cabinet is headed by the prime minister, and is advised by the cabinet secretary, who also acts as the head of the Indian Administrative Service and other civil services.

As per article 88 of the constitution, every minister shall have the right to speak in, and to take part in the proceedings of, either house, any joint sitting of the houses, and any committee of parliament of which he may be named a member, but shall not be entitled to a vote in the house where he is not a member.

Ministries and departments of the Government of India:

The Civil Services of India are the civil services and the permanent bureaucracy of India. The executive decisions are implemented by the Indian civil servants.

In the parliamentary democracy of India, the ultimate responsibility for running the administration rests with the elected representatives of the people which are the ministers.

These ministers are accountable to the legislatures which are also elected by the people on the basis of universal adult suffrage.

The ministers are indirectly responsible to the people themselves. But the handful of ministers are not expected to deal personally with the various problems of modern administration.

Thus the ministers lay down the policy and it is for the civil servants to enforce it.

The cabinet secretary (IAST: Maṃtrimaṇḍala Saciva) is the top-most executive official and senior-most civil servant of the Government of India.

The cabinet secretary is the ex-officio head of the Civil Services Board, the Cabinet Secretariat, the Indian Administrative Service (IAS) and head of all civil services under the rules of business of the government.

The cabinet secretary is under the direct charge of the prime minister.

India has a quasi-federal form of government, called "union" or "central" government, with elected officials at the union, state and local levels. At the national level, the head of government, the prime minister, is appointed by the president of India from the party or coalition that has the majority of seats in the Lok Sabha.

The members of the Lok Sabha are directly elected for a term of five years by universal adult suffrage through a first-past-the-post voting system.

Members of the Rajya Sabha, which represents the states, are elected by the members of State legislative assemblies by proportional representation, except for 12 members who are nominated by the president.

India is currently the largest democracy in the world, with around 900 million eligible voters, as of 2019.

Power is divided between union government and state governments.

State government's legislature is bicameral in 5 states and unicameral in the rest. Lower house is elected with 5 years term, while in upper house 1/3 of the total members in the house gets elected every 2 years with 6-year term.

Local government function at the basic level. It is the third level of government apart from union and state governments.

It consists of panchayats in rural areas and municipalities in urban areas. They are elected directly or indirectly by the people.

The Finance minister of India usually presents the annual union budget in the parliament on the last working day of February.

However, for the F.Y. 2017–18, this tradition had been changed. Now budget will be presented on the 1st day of February. The budget has to be passed by the Lok Sabha before it can come into effect on 1 April, the start of India's fiscal year.

Interest payments are the single largest item of expenditure and accounted for more than 40% of the total non-development expenditure in the 2003–04 budget.

Defense expenditure increased fourfold during the same period and has been increasing because of India's desire to project its military prowess beyond South Asia. In 2007, India's defense spending stood at US$26.5 billion.