Groww is an India-based online investment platform that targets first-time investors and millennials. Headquartered in Bangalore, this allows investors to open an account electronically and transact in mutual funds and also stocks online. As of June 2018, it had partnered with 34 mutual fund houses and around 5000 mutual funds were available on the platform. Nextbillion Technology, the company behind the platform, had highest transactions amongst the BSE Star MF Fintech in 2018-19. As of Sep 2019, the company had raised $29 million in venture capital, had 2.5 million users with two-thirds being first-time investors. 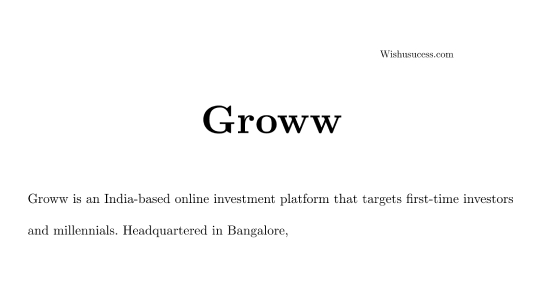 The app and its services are available free-of-charge to the customer, with direct mutual fund plans made available in April, 2018. Groww provides mutual fund explorer with information including past performance and stocks held, educational content on investing and mutual fund portfolios for various goals and profiles. Groww does not provide recommendations and expects users to choose their portfolio based on the information available.

Groww has SmartSave feature, aimed at saving account holders, where the money is stored in a liquid fund with an instant redemption option.

Groww wants to expand to stocks with parent company, Nextbillion technology, being a registered broker in cash segment with BSE.

Groww was founded in 2016 by former Flipkart employees Lalit Keshre, Harsh Jain, Neeraj Singh and Ishan Bansal. It received seed capital from investors including Y Combinator, Mukesh Bansal and Ankit Nagori in January 2018. It raised further $1.6 million, in June 2018, in a pre-series A funding round from Insignia Venture Partners, America's Lightbridge Partners and Kairos fund. In Jan 2019, it raised $6.2mn in a Series A funding round led by Sequoia India. In Series B, a further $21.4 million was raised in Sep 2019, led by U.S.based VC firm Ribbit Capital, with existing investors Sequoia India and Y Combinator also participating.