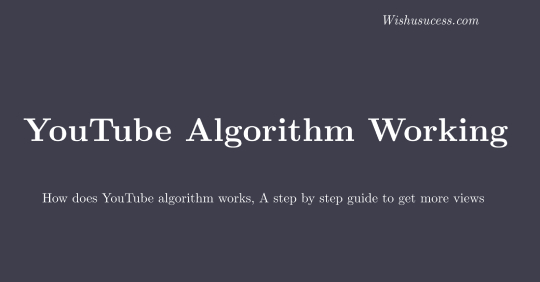 Up until 2012 (back when users were only watching 4 billion hours of YouTube per month, instead of 1 billion per day) YouTube ranked videos based on one metric: view count. That's how YouTube algorithm works earlier.

Drawback: While this tactic was supposed to reward great videos, and place the most popular ones in front of audience eyeballs, instead it created a clickbait problem. If a video’s title is misleading, people might click play, but they’ll also stop watching pretty fast. This strategy was bad for quality, which was bad for advertisers, which was bad for the platform.

YouTube re-jigged the algorithm to favor view duration (a.k.a. watch time), and time spent on the platform overall (a.k.a. session time). This caused a new wave of annoying tactics: like taking an unnecessary amount of time to deliver on a video’s promise. (Although, to be fair, YouTube has always told people that snakey optimization practices don’t guarantee anything, and to just focus on making good videos.) That's how YouTube algorithm works earlier.

Simultaneously, rewarding videos that retained viewers for longer amounts of time (some content creators interpret this as “longer videos,” though that’s not necessarily the case) meant that creators had to reduce the time they spent making each video. They couldn’t afford to make frequent, high-quality, labour-intensive videos that were also long. (This is why it’s no surprise that five of YouTube’s top ten stars in 2018 made their name by recording themselves playing video games.)

Then, in 2016, YouTube released a whitepaper that described the role of deep neural networks and machine learning in its recommendation system.

While we learned a lot, the algorithm is still very, very secret.

And it’s not perfect. YouTube has suffered some criticism over the past two years. Tech theorists have called its algorithm a “misinformation engine” and “the great radicalize” due to its tendency to show conspiracy theories, fake news, and increasingly disturbing content to users. According to some research, the YouTube algorithm is on par with Facebook’s and Twitter’s in creating the filter bubbles that swayed the 2016 U.S. election.

In 2017, YouTube purportedly improved the quality of the news videos popping up, in order to reduce “inflammatory religious or supremacist” content. That's how YouTube algorithm works earlier

At the beginning of 2019, YouTube announced that its algorithm will no longer recommend “borderline content” that could harm or seriously misinform viewers.

It remains to be seen how effective those changes will be at soothing advertisers, but let’s look at what we know about how the algorithm works today.

YouTube tells us that ”the goals of YouTube’s search and discovery system are twofold: to help viewers find the videos they want to watch, and to maximize long-term viewer engagement and satisfaction.” So how YouTube algorithm works.

The algorithm affects the six different places your video can surface on YouTube:

Based on the whitepaper from 2016 that we mentioned earlier, we know that YouTube’s algorithm—or AI, if you prefer—tracks viewers’ perceived satisfaction to create an addictive, personalized stream of recommendations.

Essentially, one neural network filters videos to see if they are good candidates for the viewer’s “next up” selection (based on the user’s history, and what similar users have watched.)

Meanwhile, a second neural network ranks videos by assigning them a score. This is based on factors which are not revealed, entirely: although a video’s newness and a channel’s frequency of uploads are both mentioned.

The idea is not to identify “good” videos, but to match viewers with videos that they want to watch. The end goal is that they spend as much time as possible on the platform (and therefore see as many ads as possible.)

In 2018, Pew Research concluded that YouTube viewers are directed to progressively longer and more popular videos as they spend time on the platform.

Meanwhile, search results on YouTube are based on two primary factors (and many mysterious others):

However, “search results are not a list of the most-viewed videos for a given query,” YouTube insists (emphasis ours).

According to YouTube, the following user behaviors are part of what guides the algorithm’s choices:

All that said, remember the algorithm is complicated, constantly changing, and in many ways unknowable. (Especially to those of us who don’t work at Google.)

But while there are no guarantees beyond (say it with me) making valuable, entertaining content, here are some tied-and-true best practices that can set your channel up for success.

1.) Use accurate keywords in your video title to optimize for search: This goes for all of your metadata: the video description, captions, and tags. (Hint: this doesn’t mean typing in a jumbled word salad: your human audience needs to be able to read these, too.)

3.) Work backwards from your search traffic sources to adjust your keywords: Use your channel’s Search Report to find out what search terms people are already using to find you. Make sure that you’re using the same terms in your video titles, descriptions and keywords. (As long as they’re accurate: enticing people to click will only hurt your ranking if they stop watching after a few seconds.)

4.) Work backwards from your search traffic sources to create new videos: If people are finding you through a keyword that you aren’t addressing in your videos, consider whether that’s an angle you can take on next, in order to fill that niche.

5.) Transcribe your video: Sound-off viewing is very common, especially on mobile, so keep those viewers watching by including subtitles. While auto-generated captions are available in some languages, if you upload your own closed captions or subtitles for your video, the file will also be indexed for search and may improve your search ranking.

6.) Translate your video: Your potential audience includes people who don’t speak the same language you do. YouTube encourages creators to widen their audiences by including translations of video titles, descriptions and subtitles wherever possible. Translations are indexed by search, as well.

7. Create custom thumbnails: Besides your title, the image you select to represent your video makes the biggest difference to someone looking for a video to watch. Consider that ninety percent of top-performing videos on YouTube use a custom thumbnail rather than an auto-generated one. Don’t let it be an afterthought.

8.) Convince your viewers they should watch the whole video: Ideally, your video is so naturally valuable and compelling  that people will watch all the way through. However, if you’re experiencing drop-off, experiment with tactics to add value to the end of your video. Alternately, try placing cards at predicted drop-off points to direct viewers to your other videos.

9.) And don’t trail off at the end: Use cards, watermarks, and endscreens to direct viewers’ next moves. These are all clickable links that appear in your video. Use them to point viewers to your channel and your next video.

10.) Convince your viewers to subscribe to your channel: Your subscriber count is more than just a vanity metric: more subscribers means more organic reach for your videos. Time your request for when they love you most: after a big laugh, surprise or twist. If subscribers opt in to notifications even better: they’ll get pinged every time you post a new video. Check out this list of awesome YouTube channels to inspire you.

11.) Make series, not one-offs: By making a series of videos that naturally lead into each other, you encourage viewers to keep watching. You can also group relevant videos into playlists that will auto-play one after the other, reducing the likelihood that a user will skip to another creator. (Or, worse, stop watching altogether: remember that a user’s total YouTube session time counts towards your channel’s watch time.)

13.) Watch your analytics: Pay attention to what is doing well, and why. This is where you can look at viewer drop-off, subscriber behavior, and peak times for posting. You can also identify which videos need updating or replacing. Here’s our complete guide to YouTube analytics.

What is Click Meeting Software, Pricing Plan and Reviews