The Department of Space (DoS) (अंतरिक्ष विभाग)  is an Indian government department responsible for administration of the Indian space program. 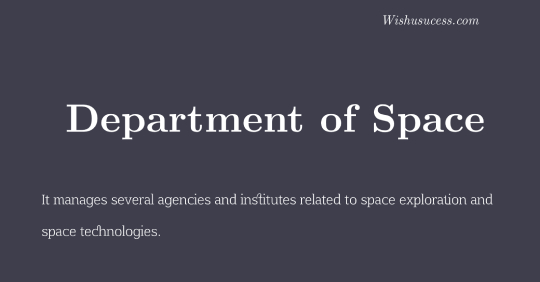 The Indian space program under the DoS aims to promote the development and application of space science and technology for the socio-economic benefit of the country.

Agencies and institutes of Indian Department of Space:

The Department of Space manages the following agencies and institutes:

In 1961, the Government of India and Prime minister Jawaharlal Nehru entrusted the responsibility for space research and for the peaceful use of outer space to the Department of Atomic Energy (DAE), then under the leadership of Dr. Homi J. Bhabha.

In 1962, the Department of Atomic Energy (DAE) set up Indian National Committee for Space Research (INCOSPAR), with Dr. Vikram Sarabhai as chairman, to organise a national space programme.

In 1969, (INCOSPAR) was reconstituted as an advisory body under the India National Science Academy (INSA) and the Indian Space Research Organisation was established. The Government of India constituted the Space Commission and established the Department of Space (DoS) in 1972 and brought ISRO under DoS management on 1 June 1972.

Dr. Kailasavadivoo Sivan is the current chairman, Space Commission, Secretary, Department of Space. Vanditha Sharma is the Additional Secretary of the department.