Indian Institute of Management Ahmedabad (IIM Ahmedabad or IIM-A), is a public business school located in Ahmedabad, Gujarat, India. The school has been accorded the status of a Institute of National Importance by Ministry of Human Resources, Government of India.

Established in 1961, the institute offers master's degree programmes in management and agri-business management, a fellowship programme and a number of executive training programmes.

The institute launched the IIM Ahmedabad Endowment Fund in June 2020 to "make a larger impact in the field of education, entrepreneurial leadership, management practice and public policy". 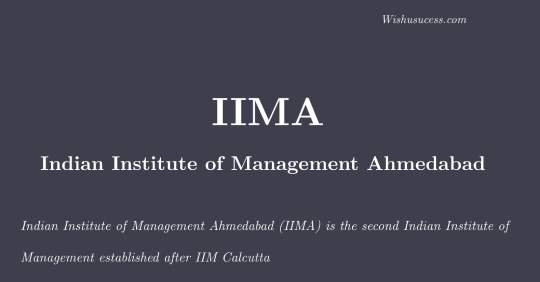 IIM Ahmedabad was established on 11 December 1961 with the active support of the Government of India, the Government of Gujarat, Harvard Business School, and prominent members of Indian industry. The physicist Vikram Sarabhai and businessman Kasturbhai Lalbhai, both natives of Ahmedabad, played pivotal roles in setting up the institute. The institute's Kasturbhai Lalbhai Management Development Centre and a Kasturbhai Lalbhai Chair in Entrepreneurship are named in his honour. The management educator Ravi J. Matthai and several other Ahmedabad-based businessmen also played a major role in its creation.

IIM Ahmedabad offers master's degree in management as per the approval of the Indian Institute of Management Bill, 2017. The two-year full-time residential programme (MBA-PGP)  and the one-year full-time residential programme for experienced professionals (MBA-PGPX) are the two programmes under which students are awarded a degree of Master of Business Administration (MBA). Additionally, IIM Ahmedabad, under the ePost Graduate Programme (ePGP) in Management., also offers a hybrid management programme.

Some of the students going on exchange receive scholarships from the Institute, DAAD Germany, the French Government and participating schools.

IIMA offers different academic programs and has admission processes and eligibility respectively. The IIMA admission process is based on the course candidate opt for. CAT score is the basic exam to apply for admission in all of the academic programs. apart from that, they accept applications from other entrance exams like GRE, GMAT, GATE, UGC-JRF & ICAR-SRF . The next major aspect for admission is the category (GEN & EWS, NC & OBC, SC, ST, PWD & PWD(ST) ), Total seats are further divided into the category where IIM accept admission on the category basis. Good academic record and percentage score is another major aspect.

IIM also conducts its analytics writing test and personal interview (AWT & PI) in Ahmedabad, Banglore, Hyderabad, Kolkata, & New Delhi cities of selected candidates. Seats in IIMA are reserved, based on government instruction 27% of seats are reserved for NC-OBC, 15% for SC, 7.5% for ST candidates, 5% for Persons with Benchmark Disabilities (PwD), and up to 10% for Economically Weaker Sections (EWS).

The university has the following sector or mission oriented centers which are staffed by faculty members:

Worldwide, the Financial Times has ranked IIM Ahmedabad 21 in its Masters in Management Ranking 2019 and 61 in its Global MBA Ranking 2020. The QS Global 250 MBA Rankings 2020 ranked it 40 in the world[35] and 6th in Asia. It was ranked 75 by The Economist in its 2019 Full-time B-school ranking, the only institute in India to be ranked.

It was ranked second in India by Outlook India's "Top Public MBA Institutions In India" survey of 2020.

The placement process at IIM Ahmedabad is a student-driven process that institutionalizes placements for the entire batch.

The second stage is the final placement process in around February. This process is handled by the newly elected committee among the PGP1s to avoid any conflict of interest and ensure a fair process. Companies from multiple sectors across different geographies hire candidates for a wide range of functions.

Business: IIMA has been instrumental in influencing the business landscape of the country, with the highest proportion of BSE 500 CEOs (who have an MBA) coming from IIMA. More than 400 students provide live consulting for businesses through the Forum for Industry Interaction annually. 84 projects were undertaken by students in 2015.

Policy: A key study by IIMA on salaries in the private and public sector helped shape the 7th Central Pay Commission's recommendations. Professors from IIMA have been appointed to eminent panels and committees, responsible for shaping key policies, by the government. IIMA's Gold Policy Centre is in the process of publishing a paper on the government's Gold Monetization Policy. The Punjab Prisons Department has signed a MoU with IIMA for a prison modernization project. The Central Vigilance Commission has asked IIMA to come up with India's first index to measure perceptions of graft and corruption, based on the Corruption Perceptions Index of Transparency International. Key studies on state health indexes have also been released by IIMA, helping to highlight the progress made on the same by various states across the country.

Training: Through its Executive Education programs, IIMA will train key senior officers from Chhattisgarh, as well as state Chief Minister Raman Singh, focussing on key management practices and project management. Officers from the Delhi Jal Board will also undergo training on Project and Risk Management. A MoU has also been signed between the Institute and the Delhi Govt to train the principals of all 1024 schools run by it, with the training to be conducted by the RTE Resource Centre.

RTE-RC: The Right to Education Resource Centre (RTE-RC), started by a group of students under the guidance of Prof. Ankur Sarin, helps parents fill out forms and get children admitted under the RTE Act, while also raising awareness about the issue of underutilization of the Act. The Centre received 1800 application in its first year of operation, raising the number of children admitted under RTE from 30 in 2013 to nearly 600 in 2014.

Prayaas: Launched in 2004, Prayaas impacts the lives underprivileged students by directly providing them a higher quality of education through specially appointed teachers, with classes running out of the New Campus, as also through funding drives that enable students to move to better schools, in a hope for better education and better lives. The IIMA community actively helps the children with their homework and preparation for examinations. Additionally, the children use the campus' facilities and participate in activities like painting, dance, crafts, etc.

SMILE: IIMA, in association with the Wagh Bakri Group, set up an initiative called SMILE (Student Mediated Initiative for Learning to Excel) to educate underprivileged kids wherein students will conduct classes in their free time. This has been piloted in a space provided by the Ahmedabad Municipal Corporation (AMC) under a flyover near the IIMA campus.

Past and present faculty at IIM Ahmedabad include three former Governors of the Reserve Bank of India – C. Rangarajan (1968–1982), former Director I. G. Patel (1996–2001), and Y. Venugopal Reddy (current Professor of Practice). Other notable faculty over the years have been:

N. R. Narayana Murthy, Indian IT industrialist and the co-founder of Infosys, got his first job as chief systems programmer at IIM Ahmedabad.