The Indian Institute of Management Ranchi (IIM Ranchi) is a public business school located in Ranchi, Jharkhand, India. IIM Ranchi was established at Ranchi on 15 December 2009 and began classes on 6 July 2010, under the 11th Five Year Plan. 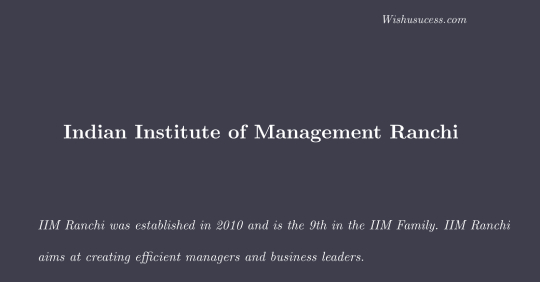 Motto in English: Working to bring change towards success, not only for one’s self, but also for the community.

The 11th Five-Year Plan, endorsed by the National Development Council in December 2007, envisaged the establishment of six new IIMs.

Indian Institute of Management Ranchi, like all IIMs, is an autonomous institution under the Ministry of Human Resources Development, Government of India. The institute is free to design its own curriculum and recruit faculty members. In April 2011, Union Minister Kapil Sibal announced that the government is mulling enhancement of the autonomy of IIMs by allowing them to select the director and the chairman of the Board of Directors.

IIM Ranchi is amongst the six new IIMs that were approved by the Union Cabinet on 27 August 2009. M. J. Xavier was the founding director of the institute.

The college operates from a temporary campus in Suchana Bhavan, behind the Governor House premises in the heart of Ranchi. The student hostels of IIM Ranchi are located at Khelgaon.

The construction of a permanent campus has begun at Birhar village on the Khunti-Karra road, about 35 kilometres (22 mi) from Ranchi.In July 2013,Jharkhand government allotted 90.14 acres (36.48 ha) of land free of cost to Indian Institute of Management Ranchi (IIM-R) at Cheri in Kanke block, 20 km from Ranchi. On 29 July 2013, the Union Minister of Human Resource Development Shri Pallam Raju laid the foundation stone of IIM-Ranchi at Cheri.

IIM Ranchi offers a master's degree in management as per the approval of the Indian Institute of Management Bill, 2017. The two-year full-time residential programs: MBA and MBA-HRM are the two programmes under which students are awarded degrees. IIM Ranchi also offers doctoral-level fellowship programmes and a part-time executive program (PGEXP).

IIM Ranchi was ranked 28 by the National Institutional Ranking Framework (NIRF) management ranking in 2019. Based on the recent NIRF 2020 Ranking released on 11th June 2020, IIM Ranchi improved it’s rank to 20th place in the management category.

Admission to courses at IIM Ranchi is done based upon merit in Common Admission Test, conducted by the IIMs.

Indian Institute of Management Ranchi is a completely student-driven business school. All the student bodies, such as Committees, Clubs, SIGs and Independent Bodies at IIM Ranchi, are managed by the students themselves and are governed by the Council for Student Affairs led by Senate members.

The Senate consists of four elected Senators from the Student Association of IIM Ranchi. They are responsible for spearheading student activities and acting as a liaison between the college administration and the students. The Council for Student Affairs also consists of seven Committee representatives, who along with Senate form the Student Council of IIM Ranchi.

There are a total of seven committees that form the backbone of IIM Ranchi's functioning namely:

There are a total of 8 Clubs which drive IIM Ranchi:

IIM Ranchi has 9 Special Interest Groups (SIGs), which are associations of like-minded students working towards attaining proficiency in a special interest.

IIM R also has independent bodies that function autonomously in tandem with Student Council to fulfil the Institute's goals in various domains.

Placement Committee has a responsibility to foster corporate relations and conduct of the summer and final placement process.

With events in the various business fields of finance, marketing, consulting, human resources and communications, organized in the form of case studies, quizzes, essays, debates and more, AGON draws huge participation from local and national colleges.

IIM Ranchi hosted its first leadership speak series named "Aarohan" on 8 January 2016 at Cockerel Stadium, Dipatoli cantonment, Ranchi. The idea of this is to invite role models across various fields to come and address the IIM Ranchi community, particularly the students. It is a leadership talk series aimed at student interaction with leaders and innovators of their respective fields to promote intellectual growth, stimulation and facilitate the development of a more inclusive world-view. Lt Gen Arun Kumar Sahni, Uttam Yudh Seva Medal, ADC, General Officer Commanding-in-Chief, South Western Command of Indian Army and Dr. Y.V.N. Krishna Murthy, Director, National Remote Sensing Centre, ISRO have been a part of the series

IIM Ranchi being the only IIM to offer specialized course in Human Resource Management, have organised two HR conclaves themed as "Turning the tide on unrest in workforce " in 2012 and "Holistic Development of Human Capital" in 2011, leaders across industry discussed the challenges faced by organizations and the role of HR managers in solving those challenges. Dignitaries like K.A. Narayan, President-HR, Raymond, Mr. Sandeep Choudhary, Partner, Aon Hewitt, Mr. Partha Dasgupta, CEO, Apogee Leads, Mr. R. Sridhar, Vice President-HR, ITC Limited any many others discussed about HR practices.

Based on the themes "Connect," "Enthuse," and "Foster," Radix connects students with industry leaders. The aim is to facilitate a quality interaction among the experts and the students along with exchange of ideas regarding various industrial growth factors and the development of a shared vision for the future. Leaders from organizations such as KPMG, Ernst & Young, Lenovo, Godrej etc. have been a part of Radix 2017.