The Indian Institute of Management Tiruchirappalli (also known as IIM T or IIM Trichy) is a public graduate business school located on Tiruchirappalli-Pudukkottai National Highway 336, Tamil Nadu, India. Founded in 2011, it is one of the seven Indian Institutes of Management the Indian government had set up during the Eleventh Five-Year Plan and was mentored by IIM Bangalore. It was the 11th IIM to be set up in India. Classes for the first batch began on 15 June 2011. 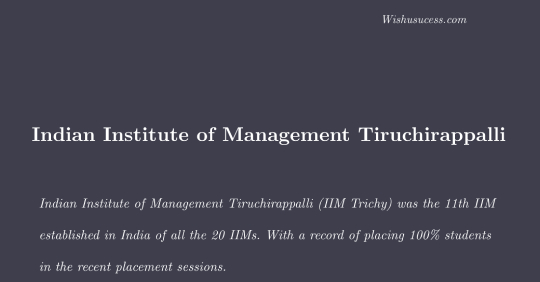 Motto in English: Knowledge is Endless

The institute temporarily operated from National Institute of Technology, Tiruchirappalli campus and the permanent campus was inaugurated on 3 April 2017 by Honourable Minister of Human Resources Development, Shri.Prakash Javadekar.

The Indian Institute of Management Trichy has set up a satellite campus at Chennai. It offers a two-year postgraduate programme for working professionals from this campus.

IIMT hosts several yearly events. Dhruva is a cultural and management fest held in the second half of the month of October. E-Summit is an entrepreneurial summit held in the month of November. HR Conclave is an industry-academia interaction event focused on Human Resources. Other events include Sanskriti - an annual war of sections, Sangram - an inter-IIM sports meet, and Kurukshetra - an inter-section sports tournament.

The admission for the two-year full-time residential Post Graduate Programme in Management (PGP) is through the Common Admission Test (CAT) scores followed by the Common Admission Process (CAP), where the 10 new and baby IIMs take part. The CAP consists of a written-ability test (WAT) followed by an interview. Based on the past academic performances, work experience, CAT scores and CAP scores, students are offered admission into this program. The total intake for the following batch 2020-22 will be 230 students approximately.