The Indian Institutes of Management (IIMs) are institutes of management education and research in India. They primarily offer postgraduate, doctoral and executive education programmes along with some additional courses. 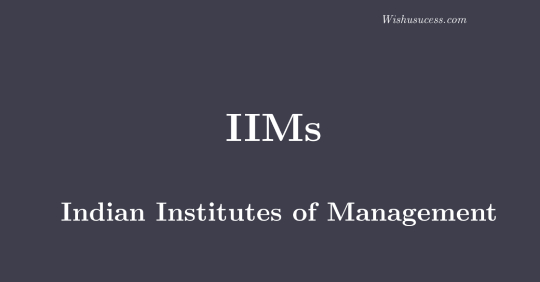 The establishment of IIMs was initiated by Jawaharlal Nehru, the first Prime Minister of India, based on the recommendation of the Planning Commission of India.

IIMs were declared institutions of national importance after the passage of Indian Institutes of Management Act, 2017.

By this act, IIMs were given more autonomy in handling their day-to-day operations. The act changed the IIM governing body from the IIM council to an IIM coordination forum.

IIMs were granted much leeway to decide their courses, fees and other related matters. In the past 10 years, top IIMs—such as IIM Ahmedabad and IIM Banglore—have achieved top 10 rankings among management schools, according to the National Institutional Ranking Framework (NIRF) used by the HRD minister of India.

These post-graduate diploma programmes are considered the equivalent of regular MBA programmes. However, since the passage of IIM Act, most IIMs have started offering Master in Business Administration (MBA).

The fellowship is considered to be equivalent to a PhD globally. Most IIMs also offer short-term executive education/EMBA courses and part-time programmes.

Total No of Institute: 20

After India became independent in 1947, the Planning Commission was entrusted to oversee and direct the development of the nation. India grew rapidly in the 1950s, and in the late 1950s the Commission started facing difficulties in finding suitable managers for the large number of public sector enterprises that were being established in India as a part of its industrial policy.

To solve this problem, the Planning Commission in 1959 invited Professor George Robbins of UCLA to help in setting up an All India Institute of Management Studies. Based on his recommendations, the Indian government decided to set up two elite management institutes, named Indian Institutes of Management. Calcutta and Ahmedabad were chosen as the locations for the two new institutes.

The institute at Calcutta was established first, on 13 November 1961, and was named Indian Institute of Management Calcutta or IIM Calcutta.

It was set up in collaboration with the MIT Sloan School of Management, the government of West Bengal, the Ford Foundation, and Indian industry.

The institute at Ahmedabad was established in the following month and was named the Indian Institute of Management Ahmedabad. Like MIT Sloan in the case of IIM Calcutta, Harvard Business School played an important role in the initial stages of IIM Ahmedabad.

In 1972, a committee headed by Ravi J. Matthai took note of the success of the two established IIMs and recommended the setting up of two more IIMs. Based on the committee's recommendation, a new IIM, originally intended to cater exclusively to the needs of public sector enterprises, was established in Bangalore (IIM Bangalore) the next year.

In 1981, the first IIM Review Committee was convened to examine the progress of the three existing IIMs and to make recommendations.

The committee noted that the three IIMs were producing around 400 PGP graduates every year and that they had reached their optimum capacity. It proposed the opening of two more IIMs to meet the rising demand for management professionals.

It also recommended expanding the Fellowship programmes, similar to PhD programmes, to meet the growing demand for faculty in management schools in India. The fourth IIM, IIM Lucknow, was established in 1984 based on the committee's recommendation.

Two more IIMs, the fifth and sixth, were established at Kozhikode and Indore in 1996. IIM Shillong was the seventh IIM to be established, following a 2005 decision by the Government of India; its foundation stone was laid on 1 December 2007; and its first academic session was 2008–09.

Since 2007, fourteen new IIMs have been set up, bringing the total number of IIMs to 20, IIM-Jammu being the latest one, starting in 2016.

The Union Cabinet, on 24 January 2017, approved the bill that became the Indian Institutes of Management Act, 2017, which declares IIMs as Institutes of National Importance and enables them to grant degrees and to further make other important changes to the institute.

The IIMs mainly offer postgraduate, doctoral, and executive education programmes. Some programmes offered by all IIMs are similar; however, some IIMs offer unique programmes for specialised purposes.

The programme is considered the flagship programme of IIMs, and awards the Post Graduate Diploma in Management (PGDM) to successful candidates. Since 2018, most IIMs have started granting MBA degrees for this flagship program.

Students join this program just after finishing their school (class XII). The program is called IPM (Integrated Programme in Management) at both the institutes.

The course structures are similar though not same at both the institutes. For the first three years, they are taught a combination of "statistics, economics and humanities", making them unique in their way. The last two years, they undergo the program with PGP students at their respective institutes.

IIM Indore first started this program in 2011 and thereby became the first IIM to have a bachelors program. Four batches of IIM Indore's IPM have been graduated and inducted in the industry.

Doctoral Education: IIMs offer a Fellow Programme in Management (FPM) as a full-time doctoral-level programme in management. This programme is aimed at preparing students for careers in teaching or research in different disciplines of management, as well as for careers outside academics that demand a high degree of investigative and analytical ability.

A student who completes this programme at any IIM, where (s)he is registered as a doctoral scholar, is awarded the title of Fellow of that institute (e.g. Fellow of the Indian Institute of Management Calcutta).

This Fellow Programme is equivalent to the Doctor of Philosophy (PhD) degree. Students receiving such a fellowship every year, across all IIMs, work in close association with one another in specific research areas of their choice.

The certificate programmes at IIMs are not considered as equivalent to an MBA or EMBA. Only the diploma-level programmes are considered as equivalent, depending on whether it is full-time or part-time. Many IIMs—such as IIMC, IIMB, IIMK, IIM Kashipur, and IIM Rohtak—have partnered with third-party companies to enable these courses to be provided under a distributed model.

Different programmes of IIMs follow different admission processes. Admission for residents of India to the flagship two-year PGP programmes at all IIMs is based on the Common Admission Test (CAT).

CAT scores are often used as the primary short-listing criteria for admissions. International/overseas applicants have the option to apply using GMAT scores in lieu of CAT scores.

GMAT scores are a prerequisite short-listing criteria used for admission to the one-year full-time programme for experienced executives.

Test requirements for doctoral programmes vary. Some IIMs require candidates to make a presentation of a broad research idea or take a Research Aptitude Test (RAT) followed by round of interviews while all are compelled to accept scores on standardized tests such as the CAT, GATE, GMAT, and GRE.

The overall profiles of candidates, including past academic and professional accomplishments, are considered for all programmes, along with valid standard test scores.

Some programmes require essays and academic or professional recommendations. The final round of admission evaluations involve an interview, before which some IIMs conduct other evaluation processes like written assessment tests and group discussions.

The Common Admission Test (CAT) is a management aptitude test conducted by the IIMs primarily as an evaluation tool for admission to their two-year PGP programmes.

It is widely considered as one of the most competitive exams in the world, with a success rate of around one in two hundred. Even with the recent addition of new colleges, in 2013 the acceptance rate at IIMs was 1.714%, one of the lowest in the world.

Originally conducted as a paper-and-pencil test given on a particular date all over India, in 2009 CAT began being given as a computer-based assessment operated by Prometric.

In 2014, TCS received a 5-year contract to conduct the test. The online test is now given over a period of a few weeks.

In August 2011, the six newer IIMs (Raipur, Rohtak, Ranchi, Udaipur, Trichy and Kashipur) announced that in the coming year they will replace the group-discussion round with a common written analysis test to evaluate communication and comprehension skill.

The seven older IIMs did not announce plans to change the admission process.

The admissions for the two-year full-time programme is done by shortlisting based on GMAT scores in conjunction with candidate profile suitability.

This is followed by evaluation of essays and a panel-interview round. The quality of prior work experience and future leadership potential is a critical factor in the selections.

IIMs also follow a quota system, as per the provisions of the Indian constitution. As per the provisions, 15% of the seats are reserved for students of Scheduled Castes, and 7.5% for Scheduled Tribes. Since 2008, the Other Backward Classes have also been given 27% reservation, after the Supreme Court of India upheld the validity of relevant government regulation.

The provisions are being implemented in a phased manner due to resource constraints. All aspirants have to take the Common Admission Test which consists of an objective-type exam, a group-discussion round, and personal interviews, with the cut-off for reserved-category candidates being possibly lower than for general-category candidates.

Regular counselling sessions, extra classes, and tutorials, by senior students, for needy students are a regular feature of the IIMs. IIMs provide financial support to needy and deserving students in the form of scholarships.