The ownership and use of the space station is established by intergovernmental treaties and agreements.

The ISS serves as a micro-gravity and space environment research laboratory in which scientific experiments are conducted in astrobiology, astronomy, meteorology, physics, and other fields.

The station is suited for testing the spacecraft systems and equipment required for possible future long-duration missions to the Moon and Mars.

It is the largest artificial object in space and the largest satellite in low Earth orbit, regularly visible to the naked eye from Earth's surface.

It maintains an orbit with an average altitude of 400 kilometres (250 mi) by means of reboost manoeuvres using the engines of the Zvezda Service Module or visiting spacecraft. The ISS circles the Earth in roughly 93 minutes, completing 15.5 orbits per day.

The station is divided into two sections: the Russian Orbital Segment (ROS), operated by Russia; and the United States Orbital Segment (USOS), which is shared by many nations. Roscosmos has endorsed the continued operation of ISS through 2024, but had previously proposed using elements of the Russian segment to construct a new Russian space station called OPSEK. As of December 2018, the station is expected to operate until 2030.

The first ISS component was launched in 1998, with the first long-term residents arriving on 2 November 2000. Since then, the station has been continuously occupied for 19 years and 215 days.

This is the longest continuous human presence in low Earth orbit, having surpassed the previous record of 9 years and 357 days held by the Mir space station. The latest major pressurized module was fitted in 2011, with an experimental inflatable space habitat added in 2016.

The ISS is the ninth space station to be inhabited by crews, following the Soviet and later Russian Salyut, Almaz, and Mir stations as well as Skylab from the US.

The station is serviced by a variety of visiting spacecraft: the Russian Soyuz and Progress, the US Dragon and Cygnus, the Japanese H-II Transfer Vehicle, and formerly the European Automated Transfer Vehicle.

The Dragon spacecraft allows the return of pressurized cargo to Earth (downmass), which is used, for example, to repatriate scientific experiments for further analysis. The Soyuz return capsule has minimal down-mass capability next to the astronauts. 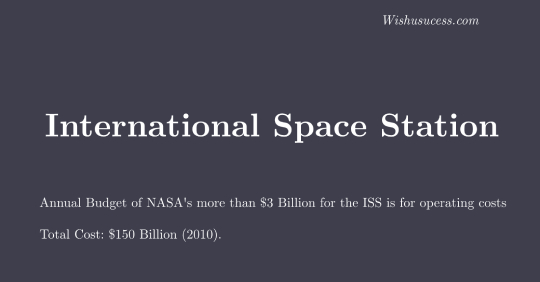 The ISS was originally intended to be a laboratory, observatory, and factory while providing transportation, maintenance, and a low Earth orbit staging base for possible future missions to the Moon, Mars, and asteroids.

However, not all of the uses envisioned in the initial memorandum of understanding between NASA and Roscosmos have come to fruition.

In the 2010 United States National Space Policy, the ISS was given additional roles of serving commercial, diplomatic, and educational purposes.

The components of the ISS are operated and monitored by their respective space agencies at mission control centres across the globe, including:

NASA's Mission Control Center at Lyndon B. Johnson Space Center in Houston, Texas, serves as the primary control facility for the United States segment of the ISS.

The 1998 Space Station Intergovernmental Agreement sets forth the primary framework for international cooperation among the parties.

A series of subsequent agreements govern other aspects of the station, ranging from jurisdictional issues to a code of conduct among visiting astronauts.

The ISS has been described as the most expensive single item ever constructed. As of 2010 the total cost was US$150 billion.