Jai Prakash University (JPU) is one of the state premier universities in Chhapra, Bihar, India. Initially serving the needs of higher and quality education of the people of Saran com-missionary, it has completed its 29 years and has entered its 30th year, With 21 constituent colleges, 11 affiliated colleges and 23 proposed colleges including 10 professional colleges, it is offering courses at the undergraduate level and postgraduate level in most subjects. 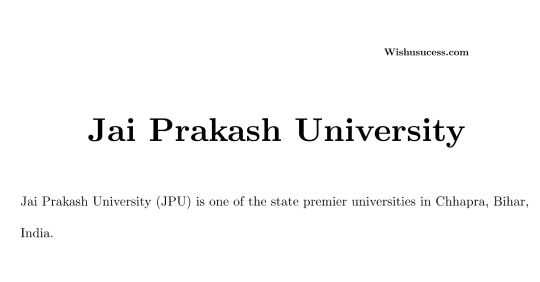 It was established by the Government of Bihar in response to the needs of the people of Saran com-missionary. The university was named in memory of freedom fighter Loknayak Jai Prakash Narayan.

The university is recognized by the UGC as a state university and is a member of the Association of Indian Universities, having jurisdiction over the Saran Division, comprising the three districts of Saran, Siwan and Gopalganj.

250 acres (1.0 km2) of land has been acquired for a new campus. The university campus is about two km away from the main town. Jai Prakash Vishwavidyala (University) was established on 22.11.90 by the enactment of Section 3(b) of Bihar State Universities Act, 1976 with its Headquarters at Chhapra, after Carving it out from the then, Bihar University (now B.R.A. Bihar University) Muzaffarpur .

The territorial jurisdiction of the University is stretched over the whole of Saran Division Comprising three districts of Chhapra, Siwan and Gopalganj. The Colleges situated in these districts were automatically transferred to Jai Prakash University, Chhapra. There are altogether 21 constituent Colleges, 11 affiliated colleges in which 2 are deficit Grant Colleges (including one minority college Z A Islamia PG College siwan).

The university has four main faculties:

There are 11 affiliated colleges under Jai Prakash University.