The Kerala Public Service Commission (KPSC) is a body created by the Constitution of India to select applicants for civil service jobs in the Indian state of Kerala according to the merits of the applicants and the rules of reservation.

The Head Office of the KPSC is located at Pattom, Thiruvananthapuram, the State Capital. It has three Regional Offices and fourteen District Offices. 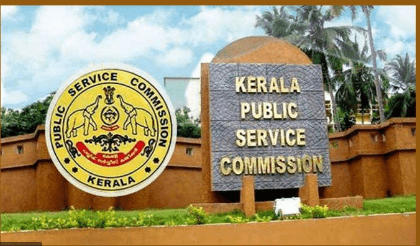 The Kerala Public Service Commission is a body created by the Constitution of India.

The Commission advise the Government on all matters relating to civil services referred to it under Article 320 of the Constitution and publish notifications inviting applications for selection to various posts as per the requisitions of the appointing authorities, conduct written test and/or practical tests, physical efficiency test and interview, prepare ranked list based on the performance of the candidates and advise candidates for appointment strictly based on their merit and observing the rules of reservation as and when vacancies are reported.

There was a Public Service Commissioner in the erstwhile Travancore state whose duty was to select candidates for direct recruitment to various categories of posts under the Government.

G.D. Nokes was appointed as the first Public Service Commissioner on 14 June 1936.

The Office of the Public Service Commissioner, Travancore continued to function till the integration of Travancore and Cochin States.

In Cochin there was a Staff Selection Board constituted in 1936 to select candidates for initial recruitment to lower posts. In 1947 a three-member Cochin Public Service Commission was constituted under an Act of the State Legislature.

There were three members on the Commission including the Chairman. The functions of the Travancore-Cochin Public Service Commission were generally the same as those laid down in the Government of India Act, 1935.

Later, when the Constitution of India came into force on 26 January 1950, the Travancore-Cochin Public Service Commission continued to function under the Constitutional Provisions.

The State of Kerala was formed on 1 November 1956 consequent on the Reorganisation of States.

It comprises the former Travancore-Cochin State (except the present Kanyakumari District and Shencottah Taluk of the present Tamil Nadu) and the Malabar District and the Kasargod Taluk of South Kanara District of the then composite Madras State.

The duties and functions of the Commission have been laid down in Art. 320 of the constitution of India and Kerala Public Service Commission Rules of Procedure ( come into force from 16th day of August 1976)

Recruitment to services & posts under the state through conduct of competitive examinations.

This is the regular mode of recruitment where an examination is conducted followed by an interview.

Recruitment to services & posts under the kerala Government by direct selection This type of recruitment is done to fill immediate/ irregular job vacancies.

It is general done through direct interviews, but sometimes, a written test is conducted preceding the interview.

Advising the Government on all matters relating to methods of

Recruitment to various services and posts

Kerala PSC advising the government to appoint qualified professional for various posts, through rank list which is created by PSC from top scorers in written, practical and physical examinations.