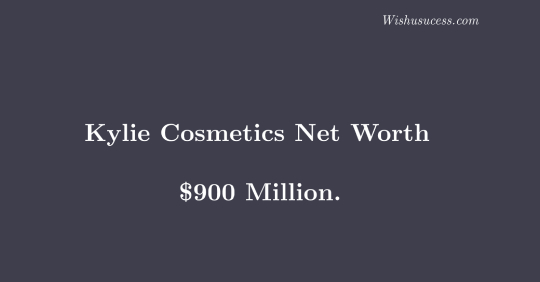 In 2014, Kylie Jenner and her mother Kris Jenner founded the company and partnered with Seed Beauty, a retail and product development company co-founded by siblings, John and Laura Nelson.

The first 15,000 lip kits were produced by Seed Beauty and funded by Jenner at a cost of $250,000 from her modelling earnings.

The company was renamed to Kylie Cosmetics in February 2016 and production was increased to 500,000 kits. By the end of 2016, the company's total revenue was over $300 million.

Jenner has described her decision to use her former insecurity about her lip size as inspiration for her brand, saying it's "one of the most authentic things I've done in my career".

In November 2016, Kylie announced the very first Kylie Cosmetics collaboration called Koko X Kylie, where she teamed up with her half-sister, Khloe Kardashian.

In May 2017, it was announced Koko X Kylie would be returning for a Part 2 of the half-sisters’ collaboration.

In a month long pop-up event in November 2017, seven TopShop stores across the US sold Kylie Cosmetics products.

In November 2018, Kylie Cosmetics began selling their products at Ulta. Many attribute the brand's success to Jenner's cosmetically altered lips.

On May 9, 2018, Kylie and Kris Jenner announced their collaboration called the Kris Kollection via Kylie's personal instagram.

The Mini Lip Set in the Kris Kollection, which includes eight mini liquid lipsticks, is aptly named “Momager”, a title in which Kris Jenner has personally taken on, and attempted to trademark, in recent years.

In addition to the "Momager" Lip Kit, the Kris Kollection includes lip glosses and a four pan pressed powder highlight/blush palette, which has created a lot of controversy online with both good and bad reviews. The collection was released just in time for Mother's Day.

On June 9, 2019, Kylie announced her collaboration with her half sister Khloé Kardashian for the third time.

In 2019, Kylie announced her collaboration with Oliver Rousteing the creative director for Balmain in the KylieXBalmain collection. Which launched on September 27 of that year.

In February 2018, Jenner released Kylie Cosmetics’ first non-collaborative collection: Weather. Jenner explained the collection is an ode to her daughter, Stormi, who inspired the collection and was born earlier that month.

In August 2019, Jenner released her Birthday Collection. This collection was for her 22nd birthday and included lip kits, an eyeshadow pallet, a face primer, matte lipsticks, jelly kylighters, an eyeliner, and many more products.

This collection featured money themed packaging. Jenner took a portion of her earnings from her birthday collection and collaborated with Ellen DeGeneres to give away over $1 million. $750,000 went to a group of women in Florida who have a non-profit organization called Nest Of Love

In February 2020 Kylie launch the Stormi collection, in celebration of her daughters second birthday. This launched included beauty products such as eyeshadow palettes, Kylie lip kits, and blush. The launch was a success and the products quickly sold out.

Kylie is know for making appearances at pop-up shops which are located inside Topshops where she does meet and greets with fans. She's had seven locations all around the country where she has sold Lip Kits as well as pallets.

In May 2016, Kylie Cosmetics changed the packaging of its Lip Kits due to complaints of theft. Due to the easily recognizable packaging and high demand for the product at the time, some customers received empty boxes after having their products stolen in the mailing process.

The original Kylie Lip Kit box was black with a white lip gloss drip design. In order to solve the theft issue, the boxes were changed to a basic black, and the recognizable lip gloss design was moved to the inside of the box.

In the April 2018 release of the Kourt X Kylie Collection, Kylie Cosmetics included eyeshadow palettes with brand new plastic packaging rather than the traditional cardboard packaging.

Marketing
Kylie Cosmetics heavily depends on social media for its marketing. As of August 2018, Jenner has the most followed Snapchat account and 164 million Instagram followers, all of whom see her teases to past and future makeup releases.

While Jenner, or members of her family, often serve as the face of Kylie Cosmetics, the pair of lips that advertise the Lip Kits themselves belongs to beauty and lifestyle blogger, Ashley Rosales. Before entering the beauty community, Ashley Rosales served in the United States Army as a mechanic.

Kylie relies heavily on Youtube for marketing her launches. Kylie Jenner's Youtube channel has over 7.5 million subscribers. She'll often record 'get ready with me' to promote her upcoming launches.

Jenner revealed that she has enlisted her housekeeper and her boyfriend Travis Scott to model swatches of the makeup on their arms for social media advertisements.

In an occurrence dubbed by Cosmopolitan Australia as the “Kylie makeup brush scandal of 2017”, Jenner received backlash from fans, makeup gurus, and Internet users alike after Kylie Cosmetics launched a set of 16 luxury makeup brushes, priced at $360.

After a few big-name makeup artists including James Charles and Jeffree Star weighed in with their negative opinions on the price of the brush kit, Jenner responded via her personal Twitter, telling fans, “I hear you guys”. Many hoped that this would mean the company would lower their prices, but they have remained the same as of late.

Though the intention of the makeup line was to remain inclusive, it was assumed by some that Jenner was profiting from diversity by including 30 shades in her concealer line.

The release of Kylie Cosmetics’ most recent line of blushes sparked fury within some fans, claiming that the names of some of the new products were “too provocative”.

Though the blush collection sold successfully, parents of young fans were not in support of names such as "Barely Legal", "Virginity", "X Rated", and "Hot and Bothered".

On April 8, 2020, Forbes again named Jenner as the world's youngest "self made" billionaire, citing her net worth having increased to 1.2 billion dollars.

However, in May Forbes released a statement accusing Jenner of forging tax documents so she would appear as a billionaire.

The publication also accused her of fabricating revenue figures for Kylie Cosmetics, citing documents Coty Inc (which had acquired a majority stake in Kylie Cosmetics) had released.

The Forbes article concluded that Kyle Cosmetics was significantly smaller and less profitable than previously reported.