Lal Krishna Advani (born 8 November 1927) is an Indian politician who served as the 7th Deputy Prime Minister of India from 2002 to 2004 under Atal Bihari Vajpayee. He is one of the co-founders and a senior leader of the Bharatiya Janata Party. Advani also served as Minister of Home Affairs in the BJP-led National Democratic Alliance government from 1998 to 2004. He was the Leader of the Opposition in the 10th Lok Sabha and 14th Lok Sabha. He was the National Democratic Alliance prime ministerial candidate in the 2009 general elections. 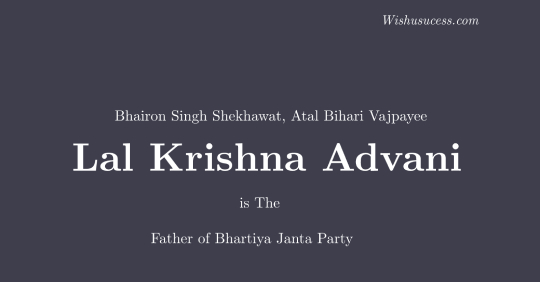 L. K. Advani was born in Karachi in a Sindhi Hindu family of businessmen to parents Kishanchand D. Advani and Gyani Devi. He completed his early schooling from Saint Patrick's High School, Karachi, and then enrolled in Government College Hyderabad, Sindh. His family migrated to India during Partition and settled down in Bombay, where he graduated in Law from the Government Law College of the Bombay University, where he became friends with Deewan Parmanand Gangwani, and considered him, Ram Jethmalani and A.K Brohi the best lawyers produced by Government Law College.

L. K. Advani married Kamla Advani (1932–2016) in February 1965. He has a son, Jayant, and a daughter, Pratibha. Pratibha Advani produces TV serial shows, and also supports her father in his political activities. His wife died on 6 April 2016 due to old age.

My Country My Life is an autobiographical book by L. K. Advani. The book was released on 19 March 2008 by Abdul Kalam, the eleventh President of India. The book has 1,040 pages and narrates autobiographical accounts and events in the life of Advani. The book became a best seller in the non-fiction category.[citation needed] The book includes mentions of events in Indian politics and India's history from 1900 till 2007.