This year about 3800 institutes applied for the rankings registering a 20 percent increase over last year. For the first time ranking of Dental institutes has been done.

NIRF India Rankings 2020 have been released for all streams including management institutes.  There are ten categories of Ranking including NIRF Management Ranking for B-schools this year. 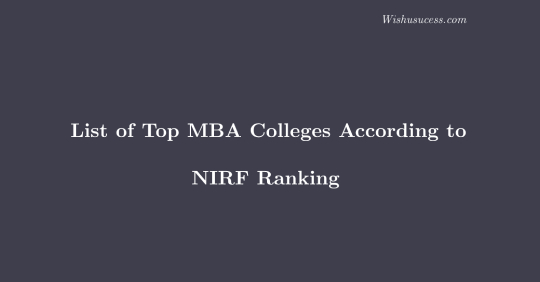 Other categories in which institutes are ranked, include Overall, universities, engineering, colleges, pharmacy, medical, architecture, law and Dental.  The virtual release of NIRF India Rankings 2020 has been done as earlier the process was postponed in April by Ministry of HRD, Government of India due to the Corona Virus pandemic.

Conducted and prepared by Ministry of Human Resource Development (MHRD), Government of India, the National Institutional Ranking Framework (NIRF) Ranking releases a list of top institutes, universities, in each category. The rankings used to be announced by the President of India till last year.

The NIRF MBA Ranking 2020 have been announced after assessing the Indian higher educational institutes on various parameters like teaching, learning and resources, research and professional practices, graduation outcomes, outreach and exclusivity, and perception.

For MBA colleges ranking 2020 the registration for the NIRF Rankings 2020 closed on September 18, 2019. MHRD completed data analysis and cross-verification. NIRF Rankings 2020 were delayed as MHRD had postponed its announcement till further notice due to corona virus pandemic.

Earlier the MBA colleges ranking 2020 was expected to be released in April 2020. NIRF Management of Business Administration, MBA colleges ranking 2020 were eagerly awaited as it could decide whether IIM Bangalore continued as No 1 B-school, or IIM Ahmedabad reclaims the title? This year as is well known IIM Ahmedabad has scored more than IIM Bangalore and has occupied Rank# 1.

The National Institutional Ranking Framework (NIRF) has been approved by the MHRD. This is the 5th year of MHRD NIRF ranking.

Following parameters have been used in MHRD NIRF Ranking 2020: