Prime Minister Narendra Modi will be judged on his government’s five year performance. How does his report card read? check out the modi government big achievement in 5 years. 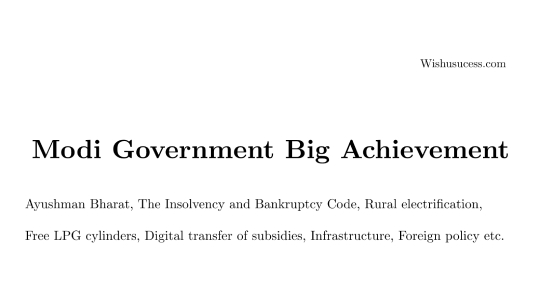 The health insurance scheme launched on September 23, 2018, has already benefited 10 lakh poor patients and could be an electoral game-changer. More than 500 million Indians who could not afford medical treatment for non-communicable illnesses like cancer and heart disease now have access to free healthcare.

The Insolvency and Bankruptcy Code:

The legislation, enacted in December 2016, is the silver bullet to tackle India’s chronic problem of non-performing assets. Banks have begun to recover debts that had seemingly turned irretrievably bad. “Phone banking” has ground to a halt.

The Modi government’s push to provide last-mile connectivity to hard-to-access rural clusters has been fairly successful. However, several villages cited as connected to the electrical grid still have households without power. Part of the problem is that some villages lie in areas controlled by Naxalites while in others the terrain makes access difficult.

Under the Ujjwala Yojana scheme, women in villages now have access to cooking gas. This has both health and economic benefits. Over 60 million free LPG connections have been given with nearly 50 per cent going to SC/ST households.

The Swachh Bharat Mission has built toilets at an unprecedented pace. Since October 2014, over 92 million toilets have been constructed, covering nearly 500 million households in one of the world’s largest operations of its kind. Cultural habits, however, mean that open-air defecation remains endemic. Many newly-built toilets lack sewage facilities; others are being used as storage rooms. Nonetheless, a beginning has been made.

This has cut out most (though not all) middlemen who routinely siphoned off large chunks of benefits due to the poor. Rajiv Gandhi, the then Prime Minister, had famously said in December 1985, while addressing the 100th anniversary of the foundation of the Congress, that only 15 paise out of every rupee in subsidies reaches the poor. With digitized transfers that figure has probably risen to 75 paise.

However, lack of Internet connectivity in rural areas, combined with limited digital literacy among farmers and labourers, often leave them at the mercy of local officials to access their money electronically.

There has been a steep rise in building roads, highways and metro networks as well as housing for the poor. These are long-term initiatives but the benefits are already visible. According to fact-checking sites, 12km of highways were constructed in 2013-14. This pace more than doubled to 27km per day in 2017-18. In Mumbai alone, coastal roads, a new airport and a large metro network could transform public transport in India’s richest city that has long been infrastructure-poor.

The government has repaired relations with China, the Maldives and Sri Lanka, built economic and geopolitical bridges to east Asia and west Asia and strengthened the strategic partnership with the US.

The implementation of the goods and services tax was chaotic and its structure needlessly complex. Its benefits, though, are beginning to seep through the economy. Revenue is lower than expected but the removal of octroi, for example, has greatly helped the logistics and transport industries. The absence of state boundary checks means truckers save up to 30 per cent in fuel and time, raising productivity with quicker turnarounds.

Modi All the PM’s men

ISRO has proved that putting scientists and technocrats rather than bureaucrats in charge of key organisations pays dividends. The success of ISRO also highlights the government’s lacunae in other areas of institution building.

Failures of the government across domains have taken some of the sheen off its concrete achievements. The Centre has let key institutions wither. A Lok Pal has not been appointed. The Central Bureau of Investigation and the Reserve Bank of Inadia have lacked strong, consistent leadership. A talent deficit is evident at all levels: the Cabinet, academic institutions and statutory bodies.

Tax laws lack certitude. The bureaucracy, in the defense and finance ministries in particular, has not distinguished itself. The Prime Minister’s Office maintains a sphinx-like silence on key issues, allowing disinformation full play.

Modi is India’s best election campaigner and executor of important developmental schemes. But as Prime Minister, you need to go beyond that and nurture talent.

The most successful leaders surround themselves with people smarter than themselves.

The Prime Minister, in contrast, is surrounded by people who are not smarter than him. That is, perhaps, the biggest failing of his prime ministership.