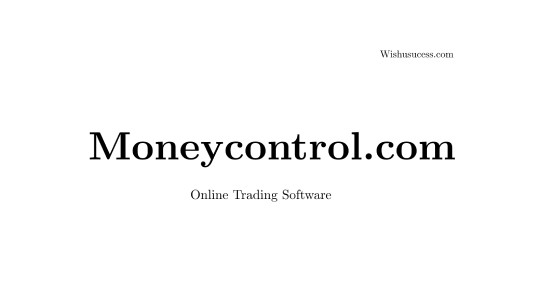 The website was started by the husband and wife team of Victor and Sangeeta Fernandes. In 2000, it was acquired by E-Eighteen dot com,a subsidiary of the Indian TV channel TV18. The couple were given 7.5% of the equity capital and E-18 got 92.5% following the acquisition. In 2014, Reliance Industries acquired Network 18 and TV18. This acquisition included Moneycontrol.com and several other websites and channels owned by TV18.

In March 2008, the gaming website "MyUniverse" collaborated with Moneycontrol.com to provide "an expanded personal finance platform". This service enabled users to manage their bank and credit card related details at one place along with transaction services and regular recommendations.

Mathew Easow, an investment adviser active on the site was fined by Securities and Exchange Board of India (SEBI) in September 2006 for giving misleading recommendations. In the same year the website launched Moneybhai Investor, a virtual stock market game where players could deal in real-time. The website has also helped in organizing investor's camps.

In July 2007, Hutch and Moneycontrol.com launched stock alerts packs. In October of the same year, the Delhi High Court ordered it to stop publishing articles from Mint after Mint's owner HT Media filed a copyright infringement suit. "Vaishya", a stock simulation event was conducted by Moneycontrol.com at PSG College of Technology's annual fest in February 2008. The website underwent a makeover in July 2008 based on viewers' feedbacks. The government of Maharashtra blocked Moneycontrol.com and bseindia.com in its headquarter Mantralaya in January 2010 following complaints that employees' use of these websites for online trading was affecting regular work. In 2010 Intuit Money Manager, a financial software was launched by Intuit India and Moneycontrol.com, which provided a free 90-days trial. The software enabled users to keep all their investment related information at one place and also calculate tax returns. After the trial ended ₹ 1 was charged per day. Moneycontrol.com was hacked on 6 November 2010 and a malicious code was inserted which redirected to an exploit website Brenz.pl.

In January 2019, users reported that the interim dividend information for Coal India, the largest coal manufacturer in the world was shown wrongly on money control's website as zero, when in actuality it was Rs. 7.25/share for December 2018.