The National Informatics Centre (NIC) is an attached office under the Ministry of Electronics and Information Technology (MeitY) in the Indian government. The NIC provides infrastructure to help support the delivery of government IT services and the delivery of some of the initiatives of Digital India. 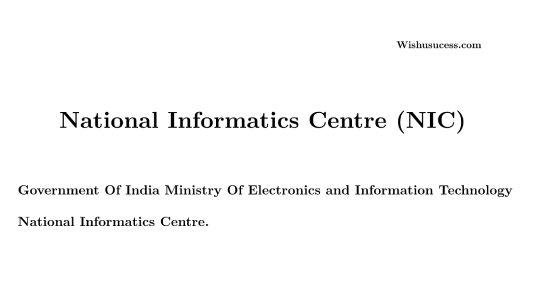 The NIC was established in 1976 under the aegis of the Ministry of Electronics and Information Technology.

The NIC is credited with helping the Indian government embrace IT in the 1990s and has also helped disseminate e-governance to the masses.

In May 2019, the government of India set up the Centre for Smart Governance (CSG), and state governments have since been advised to consult the CSG for IT projects they previously would have consulted the NIC and private firms for. Some claim that government sources have said "NIC is said to be unable to scale up", and Rajeev Chawla, Additional Chief Secretary (e-Governance), was quoted as saying "CSG will be an analogue to NIC".

The National Informatics Centre (NIC) was established in 1976 under the Planning Commission by the India Government. Then Additional Secretary late Dr. N Shesagiri was the first to introduce a network system in India called NICNET. In 1990, the takeoff by the Ministry of Electronics and Information Technology NIC's ICT Network, "NICNET", facilitates the institutional linkages with the Ministries/Departments of the Central Government, state Governments and District administrations of India. NIC is noted for being the primary constructor of e-Government applications.

In 2018, NIC opened its fourth data centre in Bhubaneshwar to complement its existing data centres in New Delhi, Hyderabad and Pune. In addition to the national data centres there are NIC State Centres in 36 states or Union territories. This is supplemented by 708 district offices.

NIC maintains the National Portal of India. The portal contains the Constitution of India,[16] and claims to have a design objective to a single point to access the information and services of the Government of India.