Motilal Nehru National Institute of Technology Allahabad (MNNIT or NIT Allahabad), formerly Motilal Nehru Regional Engineering College (MNREC), is a public technical university located in Prayagraj (Allahabad), Uttar Pradesh, India. It is one among the top NITs National Institute of Technology in the country,and like the rest of them, classified as an Institute of National Importance.The college has the distinction of the being first in the country to start an undergraduate programme in Computer Science & Engineering, in 1976-77. 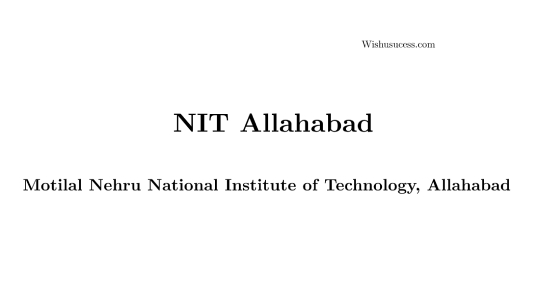 Motto in English: Success is born out of action.

Motilal Nehru Regional Engineering College was established in 1961. Allahabad University also had a Department of Electronics & Communication (J.K. Institute of Applied Physics & Technology) engineering college but MNREC was started with two another branches of engineering- Civil & Mechanical. The foundation stone was laid by Jawaharlal Nehru, the first Prime Minister of India, and the institute was named after his father, lawyer and freedom fighter, Motilal Nehru. The founding principal of the college was Gopal Kishore Agrawal. It has a great historical importance.

The main building of the college was inaugurated by Prime Minister Lal Bahadur Shastri on 18 April 1965. Effective from 26 June 2002, the college became a deemed university and was renamed as Motilal Nehru National Institute of Technology.

The college has been recognized by AICTE as a center for the Quality Improvement Programme. In 1972, the college established an industrial estate with 69 sheds with the objective of encouraging entrepreneurs and creating additional revenue.

The college is a member of the Indo-UK REC project in the area of design. Under this scheme, a Design Center was established at a cost of about Rs. six crore, which offers training and consultancy. It was given the status of an Institute of National Importance (INI) on 15 August 2007.

In 2010, the institute celebrated its Golden Jubilee year.

It is among the few technical institutions in India to house two supercomputers, PARAM 8000 and PARAM 10000.

MNNIT was ranked 48th among engineering colleges by the National Institutional Ranking Framework (NIRF) in 2020.

MNNIT offers 19 post-graduate programs of two-year duration leading to M. Tech. degrees. The Computer Science department offers a Master's in Computer Applications (MCA). It has a master's course in Mathematics and Scientific Computing and a B-school known as the School of Management Studies. Master of Social Work (MSW) is also running in the institute since 2009.

The departments in the institute are: