Established in the year 1960 as Maulana Azad College of Technology (MACT) or Regional Engineering College (REC), Bhopal, it became a National Institute of Technology in 2002 and was recognized as an Institute of National Importance under the NIT Act in 2007. The Institute is fully funded by Ministry of Human Resource Development, the Government of India is governed by the NIT Council. 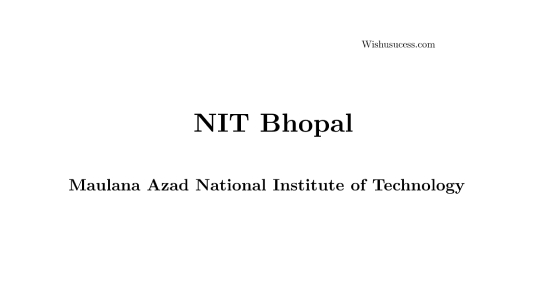 MANIT was started in 1960 as Maulana Azad College of Technology (MACT), named after the first Minister of Education of India, Maulana Abul Kalam Azad. MACT started functioning in 1960 at Govt S.V. Polytechnic with an intake of 120 students and seven faculty members. It was one of the first eight Regional Engineering Colleges started during the second five-year plan (1956-1960) in India, where the main focus was development of the public sector and rapid industrialization.

To ensure enough supply of trained personnel to meet the demand for these projects, a decision was taken to start the Regional Engineering Colleges (RECs), at the rate of one per each major state, which can churn out graduates with good engineering merit. Thus, seventeen RECs were established from 1959 onward in each of the major states. Each college was a joint and cooperative enterprise of the central government and the concerned state government. MACT was one of the first 8 REC's to be established in each region in India. It was established in the Western Region along with Visvesvaraya National Institute of Technology, Nagpur and Sardar Vallabhbhai National Institute of Technology, Surat.

It first operated from the Swami Vivekananda Polytechnic with Mr.S.R. Beedkar, Principal of Swami Vivekananda Polytechnic as the planning officer of the institute. The foundation stone of the Institute building was laid by the then Prime Minister late Pandit Jawaharlal Nehru on 23 April 1961. The Institute Progressed into the higher level of an education center in the steady development of infrastructure as well as academics. Shri J.N.Moudgill became the first principal of MACT in 1962. 5-years degree program in Civil Engineering, Mechanical Engineering and Electrical Engineering was started. In 1963, the five-year Bachelor of Architecture was started as well. In 1964, Institute is shifted to its own building which is its present campus. As the necessity of science and technology kept on growing, more undergraduate program kept on getting added which were- Electronics and Communications Engineering in 1972, Computer Science and Engineering in 1986, Information Technology in 2001 (later merged with Computer Science and Engineering in 2013 and 3-year Master of Computer Applications (MCA) in 1988.

The success of technology-based industry led to high demand for technical and scientific education. During the Premiership of Atal Bihari Vajpayee, the then Minister of Human Resource Development, Murli Manohar Joshi decided to upgrade all "Regional Engineering Colleges" to "National Institutes of Technology" that shall be funded by the Central Government itself. Hence, in 2002, all REC's became NIT's and MACT became Maulana Azad National Institute of Technology (MANIT). In the same year, MANIT was granted deemed university status. With this advancement, the World Bank assisted "Technical Education Quality Improvement Program" started in 2003, for the rapid academic and infrastructural growth of the college. In addition to engineering programs, an MBA program as well commenced from 2006. The Government of India in 2007 passed the NIT Act as per which MANIT was declared an Institute of National Importance.

Campus and Infrastructure of NIT Bhopal

MANIT is spread over 650 acres which makes it one of the largest NITs in India in terms of total campus area. The entire campus consists of administrative and academic buildings, workshops, library and community centers, residential accommodations for students and staff and other general amenities such as Post Office, a Bank with ATM, Shopping complex, a School for children, medical care unit, an auditorium with the capacity of 1000 persons and sports complex with vast expand of open area. An official branch of the State Bank of India also operates from the main campus. The campus is divided into three sections and facilities are given below:-

MANIT has various academic departments with a wide range of courses. The department at MANIT are as follows:

For NRI's and foreign nationals, the admission is conducted through DASA (Direct Admissions for Students Abroad) where a qualifying score of the SAT Subject Test in Physics, Chemistry and Mathematics is required. Other than DASA, other scholarships programs for admission are provided through the Indian Council for Cultural

Postgraduate programs conduct selection of students through Graduate Aptitude Test in Engineering for the MTech program and through NIT MCA Common Entrance Test for the MCA program. Admission to the MBA program is through the Common Admission Test.

MANIT is ranked 65 among engineering colleges of India by National Institutional Ranking Framework (NIRF) in 2020.