An Institute of National Importance under Government of India, Ministry of Human Resource Development. 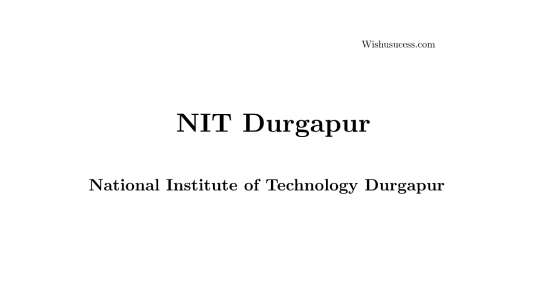 Chairman: A. B. Bhattacharya

In 1998, a review committee "High Powered Review Committee (HPRC)" was set up by the Union Government for review of RECs. The HPRC, under the chairmanship of R.A. Mashelkar, submitted its report entitled "Strategic Road Map for Academic Excellence of Future RECs" in 1998. Following the recommendations of HPRC, in 2002, the Union Ministry of Human Resource Development, Government of India upgraded all the 17 Regional Engineering Colleges (RECs) to National Institutes of Technology (NITs). In July 2003, the college was granted Deemed University status with the approval of the UGC/AICTE and was renamed National Institute of Technology, Durgapur.

National Institute of Technology, Durgapur has the following departments:

NIT Durgapur was ranked 47th among engineering colleges in India by the National Institutional Ranking Framework (NIRF) in 2020 and 96th overall.