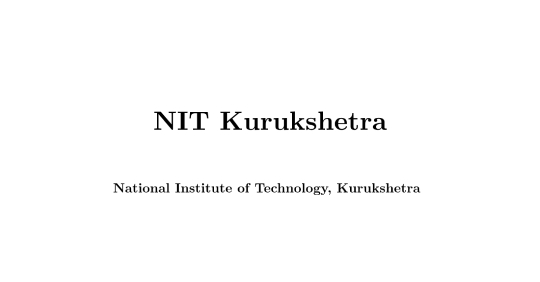 The first Prime Minister of independent India, Jawaharlal Nehru, sought to develop India as a leader in science and technology. Between 1959 and 1965, with this vision, the Government founded 14 educational institutions in different regions of India. The system of competitive entry (based on merit) gave access to higher education in these institutions. Such an institution was established in 1963 in Kurukshetra as a joint enterprise of the Government of India and the Government of Punjab, India as the Regional Engineering College, Kurukshetra (REC Kurukshetra). In 2002, all the Regional Engineering Colleges were unified by a common entrance exam. Therefore, REC Kurukshetra was renamed to National Institute of Technology under the NIT Act and was given a Deemed University status.

NIT Kurukshetra awards undergraduate B.Tech. in various engineering fields in a four-year programme. It offers postgraduate (PG) M.Tech. degrees in similar engineering fields as well as Physics. The M.Tech. degree is awarded after four semesters (two years) or two semesters for relevant PG diploma holders. Ph.D. research programmes are offered in engineering, sciences, humanities and social sciences as well as computer applications. As of 2006 it also offers an MBA degree.

Until 2012, admissions were made on the basis of merit in the All India Engineering Entrance Examination. This exam consisted of a section each on Mathematics, Physics and Chemistry. Every year, more than 1,000,000 students appeared for this exam and the acceptance rate was close to 3%.

Starting in 2013, admissions are now made on the basis of the merit list of Joint Entrance Examination. This is a common examination for all the premier universities in India. Under this, the candidates are ranked based on 60% of the marks scored in the test, and 40% of the marks in the grade XII board examinations.

NIT Kurukshetra accepts applications to the following degrees under the postgraduate course:

Applications on prescribed proforma are invited for admission to Ph.D. (full–time/part–time) programmes.

These are the major festivals that take place at NIT Kurukshetra every year.

Techspardha: Theme for Techspardha'18 PRIME was Realm of Possibilities. It is the main technical festival of the institute. Various technology based activities and competitions are organised and a large of students take part in these events thus adding to its popularity.

Confluence: It is the annual cultural event and one of the most anticipated events in North India. Many colleges from the state as well as from the other parts of the nation take part in Confluence. It is a three-day event and has been visited by some of the most famous artists and personalities of the county in the past few years. For Confluence’19 the theme is ‘Carnival of Heritage’.

There are 15 hostels (11 for boys and 4 for girls), There are also apartments for married students. These are: