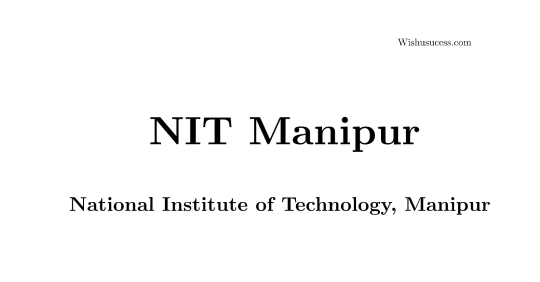 The institute is one among the thirty-one NITs established as Institutions of National Importance with funding support from the Ministry of Human Resource Development. It is also one of ten new NIT's established by the Ministry of Human Resource Development via its order no. F.23-13-2009-TS-III of 30 October 2009 and 3 March 2010. NIT Manipur was declared as a full-fledged NIT along with nine other new NITs, through An Act of Parliament and notified under Govt. of India Gazette notification No. 28 0f 2012 dated 7 June 2012 and declared as an Institute of National Importance.

NIT Manipur was ranked in the 148 band by the National Institutional Ranking Framework (NIRF) in engineering category in 2019.

With its 341-acre campus, NIT Manipur was established in 2010. The primary goal of NIT Manipur's curriculum is to develop scientific thinking in students, to promote their problem-solving skills and innovate technologies.

Bachelor of Technology (B.Tech) admissions for Indian students is through JOSAA counselling. Until 2012 admissions were based on the All India Engineering Entrance Examination (AIEEE). From 2013 to 2016, admission was done through the JEE (MAIN); ranks were based on considering 60% of the marks scored in the test and 40% in class 12 board examinations.

Regular admissions for M.Tech is through CCMT counselling. The candidate must have a valid GATE score. Regular students admitted through CCMT are offered a stipend of 12,400 INR. The institute reserves seats for sponsored and part-time candidates where people working in industries and companies and who have more than two years of experience are given the chance to complete the M.Tech. However, they receive no stipend. Applicants from abroad are given seats for direct admission in various courses under the Direct Admission for Students Abroad (DASA) scheme.

Ougri is a student-organized cultural and technical festival at NITMN that was first organised in 2013. Ougri is derived from the dance of Manipuri tradition called "Ougri Hangen Chongba". Generally, it is organised in the month of March every year.