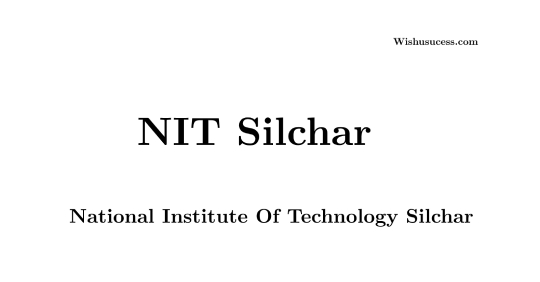 Motto in English: May our education be brilliant and radiant

The institute is located at 24.75°N, 92.79°E by the Silchar-Hailakandi road, twelve kilometers from the city of Silchar in the state of Assam.

The Regional Engineering College at Silchar (Assam) was founded in 1967 as a joint venture between the Government of India and the State Government of Assam to cater to the country's need for manpower in technology. RECs were jointly operated by the central government and the Assam state government.

The institute awards B.Tech. degrees in all six disciplines under the engineering departments. Admission to these programs is through the JEE-Main. NITS follows the Reservation Policy declared by the Supreme Court of India, by which 27% of seats are reserved for Other Backward Classes (OBCs), 15% for Scheduled Castes (SCs), and 7.5% for Scheduled Tribes (STs).

The institute also accepts foreign nationals through scholarships awarded by the Government of India, and Non-Resident Indians through an independent scheme known as Direct Admission for Students Abroad (DASA).

In the four-year program of B.Tech, the first year instruction is common across all disciplines, in which students are taught the basic courses in Mathematics, Physics, Chemistry, Professional communication, Basics of Computer Programming, Basic Engineering Drawing, and Basic Mechanical Workshop.

NIT Silchar was ranked 46th among all engineering colleges in India by the National Institutional Ranking Framework (NIRF) in 2020.

The annual technical and management festival of NIT Silchar, Tecnoesis, is held every year in the month of October. It comprises various events like competitions, exhibits, coding rounds, hackathons, robotic events and talks from guest speakers from all over India.

The annual cultural fest of Incandescence (festival), is held every year in the month of February. Various artists, singers, celebs are invited from all over the country. It also comprises the Gliterati, the annual fashion show of NITS and ThunderMarch, a metal concert.

Students are admitted for the undergraduate courses through the JEE-Main conducted by National Testing Agency [NTA],  Admission to the M.Tech and PhD courses are primarily based on scores in the GATE exam, conducted by the IITs. Faculty from other institutes work as research scholars under Quality Improvement Program (QIP).

Under the constitution of the National Institutes of Technology Act 2007, the President of India is the Visitor to the institute. The authorities of the institute are the board of governors and the Senate. The board is headed by the chairperson, who is appointed by the visitor. The director, who is appointed by the Visitor, looks after the day-to-day running of the institute. The board of governors has nominees of the Central Government, the State Government, the NIT Council and the Institute Senate. NIT Silchar is the Mentor Institute of NIT Nagaland.

NIT Silchar has been given the award of best engineering college in eastern India by leading industry body ASSOCHAM in the National Education Excellence Awards 2014 and 2015.