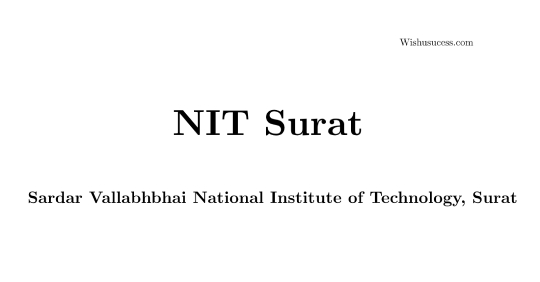 Motto in English: Charioteer of Science

Under its former name, Sardar Vallabhbhai Regional College of Engineering and Technology, NIT Surat was established in June 1961 as a co-operative venture between the Government of India and the Government of Gujarat. The institute is named after India's first Home Minister, fondly known as the Ironman of India, honorable Sardar Vallabhbhai Patel.

A review committee (HPRC) was set up by the Union Government in 1998 for review of RECs. The HPRC, under the chairmanship of Dr. R.A. Mashelkar, submitted its report entitled "Strategic Road Map for Academic Excellence of Future RECs" in 1998. Following the recommendations of HPRC, in 2002, the Union Ministry of Human Resource Development, Government of India upgraded, all the seventeen Regional Engineering Colleges (RECs) to National Institutes of Technology (NITs). On 4 December 2002 the institution was granted Deemed University status with the approval of the UGC/AICTE and was renamed Sardar Vallabhbhai National Institute of Technology.

On 5 June 2007, the Parliament of India passed the National Institutes of Technology Act declaring it an Institute of National Importance which came in effect on Independence Day 2007.

NIT Surat is governed by its ex officious visitor, the honorable President of India and the NIT Council who head the NIT organizational structure. Under the NIT Council is NIT Surat's Board of Governors consisting of 12 members that includes representatives of the state of Gujarat, MHRD in addition to other members appointed by the NIT Council and the institute's senate. The Director serves under the Board of Governors, and is the school's chief academic and executive officer. Under the director and the deputy director are the deans, heads of departments, registrar and Chief Hostel Warden.

The Registrar is the chief administrative officer and oversees day-to-day operations. He is the custodian of records, funds, and other properties of the institute. Under the charge of the heads of departments (HOD) are the faculty (full-time professors as well as those of associate and assistant status). Director is the chairman of Council of Wardens and the wardens of hostels are placed under the Chief Hostel Warden of individual hostels in the organization.

NIT Surat receives funding from Government of India of Rs.500 million per year. Other sources of funds include student fees and research funding by industry-sponsored projects. NIT Surat subsidizes undergraduate student fees by approximately 80% and provide scholarships to all M.Tech. students and research scholars to encourage them to pursue higher studies.

The academic policies of NIT Surat are decided by its senate. It consists of all professors of the institute, and administrative and student representatives. The senate controls and approves the curriculum, courses, examinations and results and appoints committees to look into academic matters. The teaching, training and research activities of the institute are reviewed by the senate to maintain educational standards. The director is the ex officio chairman of the senate.

NIT Surat follows the credit-based system of performance evaluation, with proportional weighting of courses based on their importance. The total marks (usually out of 100) form the basis of grades, with a grade value (out of 10) assigned to a range of marks. For each semester, the students are graded by taking a weighted average from all the courses with their respective credit points. Each semester's evaluation is done independently with a cumulative grade point average (CGPA) reflecting the average performance across semesters. The medium of instruction is English.

The campus is located at Ichchhanath in the city of Surat at a distance of about 10 km from the Surat Railway Station. Public transport including buses and rickshaws connect the campus to the railway station. The main entrance is located on the northern end of the campus, facing Surat-Dumas Road 13 km from the Surat Railway Station. The campus is very near to the various entertainment hubs of Surat, it also is a much favored place for joggers and walkers who come on a regular basis to the campus in morning and evening time.

The institute has 11 departments which focus on the following fields of applied sciences, engineering and technology:

The institute also has many more building spread over its campus including an administrative building that houses most of the administrative offices, a classroom complex which houses lecture halls and drawing halls.

SVNIT has ten hostels with nine for boys and one for girls named after personalities of India. Each hostel is administrated by the Chief Hostel Warden. Each hostel elects representatives from the hostel residents for areas like Entertainment, Computer Facility, Network, Environment and Cultural. Two mega hostels for boys and one mega hostel for girls with large number of facilities have been constructed.

Each hostel has its own mess, TV room, Sports room and computer facility.

Admission to most undergraduate and postgraduate courses in NIT Surat is granted through written entrance examinations. Admission to M.Tech. and Ph.D. programmes is based primarily on a personal interview, though candidates have to take written tests as well.

Admission to undergraduate programmes in all NITs is through the All India Engineering Entrance Examination now known as JEE Main. Candidates who qualify for admission through JEE Main can apply for admission in B.Tech. (Bachelor of Technology) and Integrated M.Sc. (Master of Science) courses at NIT Surat. The admissions to postgraduate programmes (M.Tech.) are made primarily through the Graduate Aptitude Test in Engineering (GATE). Integrated MSc program was started in the year 2007, in three branches, Applied Chemistry, Applied Physics, Applied Mathematics. This program now has 90 seats each.

NIT Surat follows the reservation policy declared by the Supreme Court of India, by which 27% of seats are reserved for Other Backward Classes (OBCs), 15% for Scheduled Castes (SCs), and 7.5% for Scheduled Tribes (STs). The institute also accepts foreign nationals through scholarships awarded by the Government of India, and non-resident Indians through an independent scheme known as Direct Admission for Students Abroad (DASA).

Research in the institute is sponsored by government agencies including Council of Scientific and Industrial Research (CSIR), Defense Research and Development Organisation (DRDO) and the Department of Science and Technology (DST); in 2008–09, research grants from these agencies exceeded one crore Indian rupees (Rs. 1,00,00,000; approx. US$200,000). The campus also boasts of having India's first solar plant to desalinate seawater. This was set up at an investment of Rs. 3,50,00,000

SVNIT was ranked 54 among engineering colleges in India by National Institutional Ranking Framework (NIRF) in 2020.

NIT Surat provides on-campus residential facilities to its students, research scholars, faculty members and staff. The students live in hostels (referred to as the Bhavans) throughout their stay in the institute. Facilities such as computing infrastructure and high-speed internet are extended to all the hostels and the entire campus is connected via Gigabit LAN.

MindBend is SVNIT's annual technical festival, the largest of its kind in Gujarat. Technical competitions and events covering all areas of engineering expose students across India to practical engineering. There are competitions, guest lectures, workshops and quizzes. The robotics events of Mindbend are famous in western India.

Sparsh is SVNIT's annual cultural festival. It usually takes place in the second week of February. This five-day festival, the largest of its kind in South Gujarat consists of literary and debating events/competitions in the morning and gala cultural shows in the evenings. The 'Sparsh Nights' are the Singing Night, Dance and Skit Night, Fashion Night, Inaugural and the Celebrity Night. Celebrity Night has seen performances by Euphoria, Udit Narayan, Shaan, Abhijeet Bhattacharya.

In March 2007, Punjabi singer Daler Mehndi came to perform on the celebrity night. The 2008 version was graced by Mohit Chauhan and Gaurav Dagaonkar. The 2009 version saw Bombay Rockers come to the college. The 2011 version boasted of Kailash Kher's performance. SPARSH'12, which marked the golden jubilee of SVNIT Surat was a grand success with KK performing in the celebrity night. This event also marked the beginning of mega shows in Sparsh such as Stuntmania, Hypnotism, Street Dancing. An Inaugural Night was added to the event which was graced by Flute performers and singer Rishabh Srivastava. The Sparsh of 2013 witnessed stellar duo of Salim-Sulaiman along with Shrraddha Pandit perform for the celebrity night. In 2014, Javed Ali performed sang on celebrity night. Also Paradigm Shift, a local Mumbai based band performed on singing night. In 2015, music directors and singers Vishal and Shekhar lead the musical performance and Singer KK was guest of celebrity night of the 2016 edition. 2017 saw the singer composer duo Sachin-Jigar gracing Sparsh. Cultural events like kavi sammelan and musical programs such as Ghazal nights are also organized during Sparsh. The institute Literary and Debating committee organizes public speaking competitions and talent pageants.

AutumnFest is SVNIT's annual Automotive-Entrepreneurial festival. In 2007 events included The Apprentice, Business baazigar, Spark the B-plan event, Strategem, and Lock stock and trade. A workshop by Mantis was part of Entru-meet '07.

Manoj Memorial Night Cricket Tournament (MMNCT) is a cricket tournament, organised by the students with the help of SVNIT Board of Sports, Hostel Office and Bihar Students Alumni. This tournament was first organised in 2006. It is in remembrance of a student, Manoj Kumar, who was pursuing electrical engineering in the institute and died of dengue. All the matches are played under floodlights. Nikhil Maheshwari holds the record for highest runs.

The SVNIT Alumni Association fosters the close relationship between the institute and its alumni. The association consists of a wide network of alumnus, students, staff, and faculty who organize events, publications and alumni meets. The group is directed by the office of the Dean of Alumni and Resource Generation.

The Alumni Association has chapters extend to all metropolitan cities in India and abroad that hold annual networking meets and class reunions.