The campus is located in Warangal, spread over an area of 256 acres. 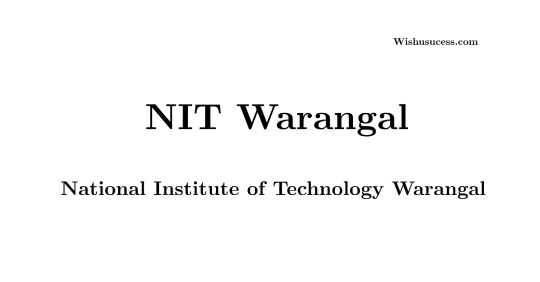 Motto in English: One who, shall succeed

The Regional Engineering College, Warangal was the first to be established (in 1959) among the chain of 15 Regional Engineering Colleges in the country. The approval of the Government of India to establish one of the RECs meant for the southern region of Warangal was conveyed to the State Government through its letter no .F 11- 5/ 58- T. 5 dated 30 January 1959. The Government of Andhra Pradesh through G. O. Ms. No. 2440 (Education Department) dated 15 July 1959 constituted the first board of Governors of the Regional Engineering College, Warangal, appointing Dr. D.S. Reddy (then Vice-Chancellor of Osmania University) as the chairman. The foundation stone for the college was laid by Pandit Jawaharlal Nehru on 10 October 1959 in Kazipet. The classes for the first batch of students in Civil, Electrical and Mechanical Engineering branches commenced on 12 September 1959 in temporary sheds erected in the Balasamudram area of Hanamkonda. Later temporary sheds were also erected in the Industrial Colony of Warangal for conducting lecture classes. Laboratory classes and workshop classes were conducted in the Government Polytechnic, Warangal in the initial stages. The conduction of classes on the premises of the permanent site in Kazipet commenced in January 1963.

In 1976, its affiliation was changed from Jawaharlal Nehru Technological University to Kakatiya University, with which it remained affiliated until the institute was granted deemed university status in 2002.

In 1994, the institute was selected by the Overseas Development Administration of the UK for exchange programs between the UK and India in the field of information technology. This program ran till 1999. In 2000, the institute started its MBA program.

In 2001, a centre of Software Technology Parks of India was opened in its campus.

In September 2002, the college was renamed as National Institute of Technology and was given deemed university status. NITW was given the status of Institute of National Importance (INI) on 15 August 2007.

NIT Warangal has a centre established with the objective of providing laboratory space for start-up industries. Future Now Innosoft (p) ltd and Sky e it solutions have started their activities in this centre. The Lakshya Foundation, an alumni-led organization, also has its office set up here.[8] M/s Infosys (p) ltd. funded a research project which is carried out in this centre by the faculty and students of NIT Warangal.[9].CUSMAT, A Virtual Reality-based startup also has emerged at the Centre for Innovation and Incubation, NIT Warangal.

It also houses the Web and Software Development Cell (WSDC), a team of students which develop the institute website, semester registrations, online feedback, online attendance, online mess and hostel allotment (OMAHA) among many other things.

Center For Innovation And Incubation

The Innovation Garage is a 24x7 student-run multidisciplinary workspace for innovation. This innovators space provides students access to the latest gadgets, tools and technology devices. It is a joint initiative of the institute and Lakshya Foundation.

State Bank of India is situated beside the campus main gate and has two ATMs – one located in the bank premises and the other near the Sports Stadium. The institute has one shopping centre which caters to the needs of the students and residents. The campus has a post office located near Viswesvraya Hall. The NITW campus comes under a separate postal zone and it is a postal delivery office. The dispensary has an X-ray machine, an ECG and a pathology laboratory with equipment like an electronic BP apparatus with pulse reader, a mini lab, an electronic binocular microscope, and a sterilization oven.

NIT Warangal was ranked 19th among engineering colleges in India by the National Institutional Ranking Framework (NIRF) in 2020 and 46th overall.

Bachelor of Technology admissions for Indian students are based on the Joint Entrance Examination (JEE – Main). Foreign students are accepted through Direct Admission of Students Abroad (DASA) and ICCR schemes.

NIT Warangal invites applications for PhD degree admissions in almost all departments twice every academic year, in July and December.

Technozion is a three-day annual technical symposium organized by the student fraternity of the National Institute of Technology, Warangal, and is aimed at providing a platform for students across India to assemble, interact, and share knowledge in various fields of science and technology. Started in 2006, it has grown to become one of the major technical festivals of South India with a footfall of over 6000 students. It is a collection of events, initiatives, workshops, guest lectures, and exhibitions. Its name comes from "techno" for technology and "Zion" meaning the promised land.

Springspree is an annual cultural festival of the National Institute of Technology, Warangal. It is organized by the student fraternity of NIT Warangal. This cultural fest has the distinction of being one among the largest cultural fests of South India. With a footfall of around 10,000 and participation of around 600 colleges and increasing this fest has come a long way from its humble inception in 1978.