Nitish Kumar (born 1 March 1951) is an Indian politician. He is the present and 22nd Chief Minister of Bihar, a state in India, since 2015 and has served in that role on five previous occasions. He has also served as a minister in the Union Government of India.

Kumar is a member of the Janata Dal (United) political party. He endeared himself to Biharis, used to low expectations from previous regimes, when as Chief Minister, his socialist policies bore dividends in appointing more than 100,000 school teachers, ensuring that doctors worked in primary health centres, electrification of villages, paving of roads, cutting female illiteracy by half, turning around a lawless state by cracking down on criminals and doubling the income of the average Bihari.

On 17 May 2014, Kumar resigned, taking responsibility for his party's poor performance in the 2014 general elections, and was succeeded by Jitan Ram Manjhi. However, he returned to office in February 2015 following a political crisis in Bihar and won the state elections of November 2015. He was elected as the national president of his party on 10 April 2016. He resigned again on 26 July 2017 as Chief Minister of Bihar due to differences with the coalition partner, Rashtriya Janata Dal (RJD), following the naming of Tejashwi Yadav, the Deputy Chief Minister and RJD member, in a First Information Report alleging corruption filed by the Central Bureau of Investigation. Hours later, he joined the National Democratic Alliance (NDA) coalition, which had thus far been the opposition, and secured a majority in the assembly. He became Chief Minister again on the following day. 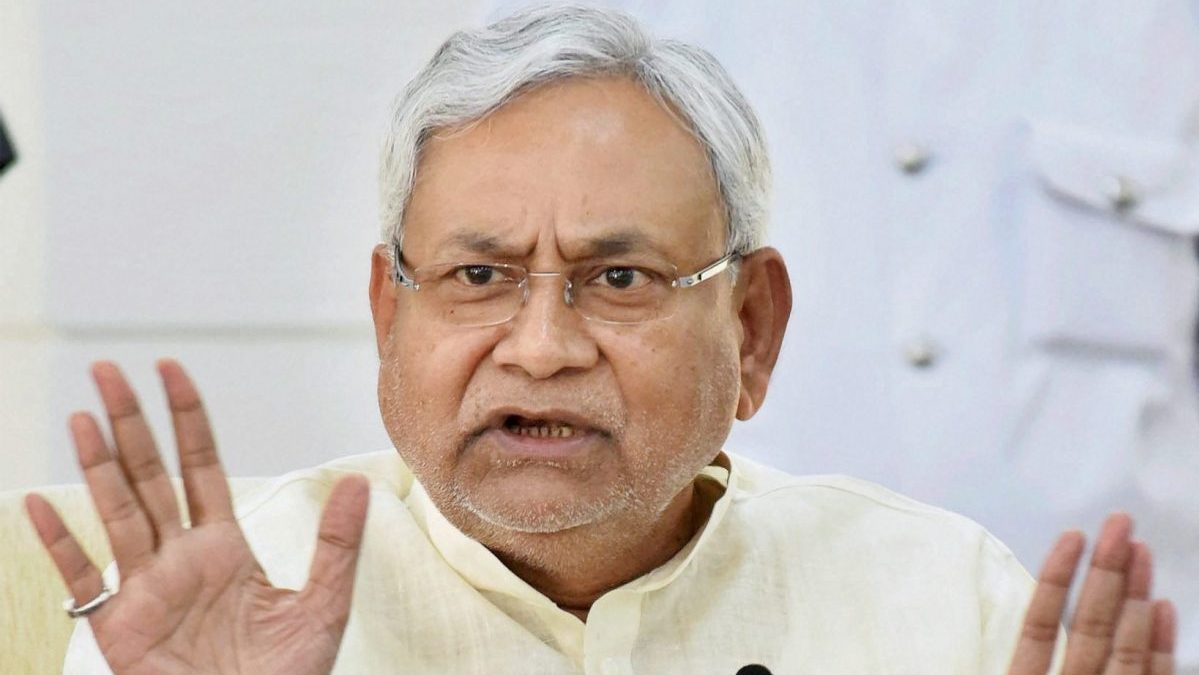 Nitish Kumar was born on 1 March 1951 in Bakhtiarpur, Bihar. His father, Kaviraj Ram Lakhan Singh, was an ayurvedic practitioner; his mother was Parmeshwari Devi.Nitish belongs to Kurmi agricultural caste.

He has earned a degree in engineering from Bihar College of Engineering (now NIT Patna) in 1972. He joined the Bihar State Electricity Board, half-heartedly, and later moved into politics. He married Manju Kumari Sinha on 22 February 1973 and has one son.

Nitish Kumar belongs to a socialist class of politicians. During his early years as a politician he was associated with the likes of Jayaprakash Narayan, Ram Manohar Lohia, S. N. Sinha, Karpuri Thakur and V. P. Singh. Kumar participated in Jayaprakash Narayan's movement between 1974 and 1977 and joined the Janata party headed by Satyendra Narain Sinha.

Kumar was briefly, the Union Minister for Railways and Minister for Surface Transport and later, the Minister for Agriculture in 1998–99, in the NDA government of Atal Bihari Vajpayee. In August 1999, he resigned following the Gaisal train disaster, for which he took responsibility as a minister. However, in his short stint as Railway Minister, he brought in widespread reforms, such as internet ticket booking facility in 2002, opening a record number of railway ticket booking counters and introducing the tatkal scheme for instant booking.

Later that year, he rejoined the Union Cabinet as Minister for Agriculture. From 2001 to May 2004, he was – again – the Union Minister for Railways. In the 2004 Lok Sabha elections, he contested elections from two places, when he was elected from Nalanda but lost from his traditional constituency, Barh.

In March 2000, Nitish was elected Chief Minister of Bihar for the first time at the behest of the Vajpayee Government in the center. NDA and allies had 151 MLA whereas Lalu Prasad Yadav had 159 MLA in 324 member house. Both alliances were less than the majority mark that is 163. Nithish resigned before the could not prove his numbers in the house.

Kumar's government also initiated bicycle and meal programs. Giving bicycles to girls who stayed in school resulted in the state getting a huge number of girls into schools and a reduction in school dropout rates.

In 2010, Kumar's party swept back to power along with its then allies, the Bharatiya Janata Party, and he again became Chief Minister. The alliance won 206 seats, while the RJD won 22. For the first time, electorates witnessed high turnout of women and young voters, while this was declared as the fairest election in Bihar, with no bloodshed or poll violence.

On 17 May 2014, Kumar submitted his resignation to the Governor of Bihar, a day after his party fared poorly in the 2014 Lok Sabha elections, winning just 2 seats against 20 seats in the previous election. Kumar resigned, taking the moral responsibility of his party's poor performance in the election, and Jitan Ram Manjhi took over.

Kumar again became Chief Minister on 22 February 2015, on the backdrop of upcoming 2015 Bihar Legislative Assembly election, considered to be his toughest election to date. His JD(U), along with RJD and Congress, formed the Mahagathbandhan (Grand Alliance) to counter the BJP in Bihar.

Kumar campaigned aggressively during the elections for the Grand Alliance, countering the allegations raised by Narendra Modi and the BJP. The Grand Alliance won the Assembly election by a margin of 178 over the BJP and its allies, with RJD emerging as the largest party with 80 seats and JD(U) placed second with 71. Kumar was sworn in as Chief Minister on 20 November 2015 for a record fifth time and Tejashwi Yadav became Deputy Chief Minister of Bihar.

Kumar's campaign was managed by the Indian Political Action Committee (I-PAC) who were hired to managed the campaign for JD(U). I-PAC designed the campaign strategy which included reaching out to a larger set of voters through innovative campaigns, including sending hundreds of branded cycles for outreach, Har Ghar Dastak (door-to-door outreach) and the DNA campaign.

When corruption charges were leveled against Tejashwi Yadav, the Deputy Chief Minister, Kumar asked for him to resign from the cabinet. The RJD refused to do so, and therefore Kumar resigned on 26 July 2017, thus ending the Grand Alliance. He joined the principal opposition, the NDA, and came back to power within a few hours.

Awards And Recognition of Nitish Kumar