Rajnath Singh (born 10 July 1951) is an Indian politician serving as the Defence Minister of India. He is the former President of Bharatiya Janata Party. He has previously served as the Chief Minister of Uttar Pradesh and as a Cabinet Minister in the Vajpayee Government. He was the Home Minister in the First Modi Ministry. He has also served as the President of the BJP twice i.e 2005 to 2009 and 2013 to 2014. 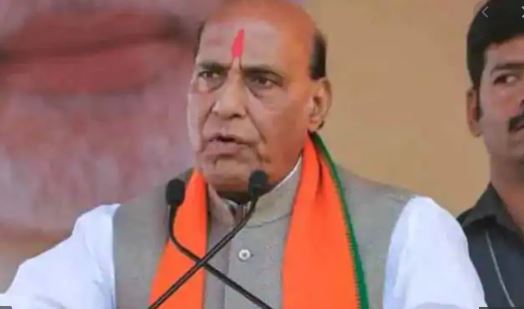 President of the: Bharatiya Janata Party

Succeeded By: B. C. Khanduri

Singh was born in Bhabhaura village of Chandauli district, Uttar Pradesh. His father was Ram Badan Singh and his mother was Gujarati Devi. He was born into a family of farmers and went on to secure a master's degree in physics, acquiring first division results from the Gorakhpur University.He worked as a lecturer of Physics at K.B. Post-Graduate College Mirzapur, UP. He was born in a poor family of Hindu Rajput caste and he had been associated with the Rashtriya Swayamsevak Sangh since 1964, at the age of 13 and remained connected with the organisation. In 1974, he was appointed secretary for the Mirzapur unit of the Bharatiya Jana Sangh, predecessor of Bharatiya Janata Party.

In 1975, aged 24, Singh was appointed District President of the Jana Sangh. In 1977, he was elected Member of Legislative Assembly from the Mirzapur. He became the State President of the BJP youth wing in 1984, the National general secretary in 1986 and the National President in 1988. He was also elected into the Uttar Pradesh legislative council.

In 1991, he became Education Minister in the first BJP government in the state of Uttar Pradesh. Major highlights of his tenure as Education Minister included Anti-Copying Act, 1992, which made copying a non-bailable offence, modernizing science texts and incorporating vedic mathematics into the syllabus.

In 1991, when Bharatiya Janata Party made its government first time in Uttar Pradesh, he was appointed as Education Minister. He remained Minister for a tenure of 2 Years.

During his tenure, he was responsible for pushing Anti-Copying Act due to which Cheating increased and sparkled a Controversy.

In April 1994, he was elected into the Rajya Sabha (Upper House of the Parliament) and he became involved with the Advisory committee on Industry (1994–96), Consultative Committee for the Ministry of Agriculture, Business Advisory Committee, House Committee and the Committee on Human Resource Development. On 25 March 1997, he became the President of the BJP's unit in Uttar Pradesh and in 1999 he became the Union Cabinet Minister for Surface Transport.

In 2000, he became Chief Minister of Uttar Pradesh and was twice elected as MLA from Haidergarh in 2001 and 2002. He tried to rationalize the reservation structure in government jobs by introducing the most Backward Classes among the OBC and SC, so that the benefit of reservation can reach the lowest status of Society.

On 7 February 2001, Singh inaugurated the DND Flyway which connects Delhi to Noida.

In 2003, Singh was appointed as the Minister of Agriculture and subsequently for Food Processing in the NDA Government led by Atal Bihari Vajpayee, and was faced with the difficult task of maintaining one of the most volatile areas of India's economy. During this period he initiated a few epoch-making projects including the Kisan Call Centre and Farm Income Insurance Scheme. He brought down interest rates on Agriculture loans and also established Farmer Commission and initiated Farms Income Insurance Scheme.

After the BJP lost power in the 2004 general elections, it was forced to sit in the Opposition. After the resignation of prominent figure Lal Krishna Advani, and the murder of strategist Pramod Mahajan, Singh sought to rebuild the party by focusing on the most basic Hindutva ideologies. He announced his position of "no compromise" in relation to the building of a Ram Temple in Ayodhya at any cost and commended the rule of Vajpayee as Prime Minister, pointing towards all the developments the NDA made for the ordinary people of India. He also criticized the role of the English language in India, claiming that most of Indian population is unable to participate in Indian economy and cultural discourse due to extreme preferences shown to English at the expense of native languages.

On 24 January 2013, following the resignation of Nitin Gadkari due to corruption charges, Singh was re-elected as the BJP's National President.

Singh is on record shortly after the law Section 377 of the Indian Penal Code was re-instated in 2013, claiming that his party is "unambiguously" in favour of the law, also claiming that "We will state (at an all-party meeting if it is called) that we support Section 377 because we believe that homosexuality is an unnatural act and cannot be supported.”

He contested the 2014 Lok Sabha elections from Lucknow constituency and was subsequently elected as a Member of the Parliament.

He was appointed the Union Minister of Home Affairs in the Narendra Modi government and was sworn in on 26 May 2014.

He triggered controversy amid the protests over the police action at Jawaharlal Nehru University (JNU), on 14 February 2016, claiming that the "JNU incident" was supported by Lashkar-e-Taiba chief Hafiz Saeed.

In May 2016, he claimed that infiltration from Pakistan declined by 52% in a period of two years.

On 9 April 2017, he launched Bharat Ke Veer Web portal and Application with Bollywood actor Akshay Kumar. This was an initiative taken by him for the welfare of Martyrs' family.

An official anthem was launched on 20 January 2018 for the cause 'Bharat Ke Veer' by him along with film star Akshay Kumar, and other ministers Kiren Rijiju, Hansraj Ahir.

Doklam is a disputed Territory for Bhutan and China, where China claimed Doklam as its Territory and due to which their started Tension between Indian Army and Liberation Army of China. Over the matter Singh assured Public to solve the matter and he had a talk with Officials of Chinese Communist Party over the Relations between the both Nation and later, the Tension solved at large extent.

Singh became the Defence minister of India on 31 May 2019. Singh was given Ministry of Defence (India) after Amit Shah was given the Ministry of Home Affairs (India).

From July 2020, there has been Tension for Standoff between Security forces of India and China over the Border Region of Ladakh. This situation under Duration of time become more tense leading to War- like Situations between the 2 Nations involving United States and other Nations. In this tension 20 Soldier of Bihar Regiment martyred their Lives.

Rajnath Singh over the Matter

Over the matter Singh had a meeting with Officials of Indian Army and also visited Ladakh Range Region and talked to them over the matter. He had also meeting with CDS Bipin Rawat, Navy chief Admiral Karambir Singh and Army general Manoj Mukund Naravane to tighten the Situation.

After the killing of 20 Troops by People's Liberation Army over the Meeting in Galwan Valley, he and Foreign minister Subrahmanyam Jaishankar played a crucial Role.[38] Over the matter Singh gave Security forces Open Hand to deal with Chinese Forces and not to trust them. He also said that he can't gaurantees to what Extend the tension would go.

Later the situation was handled.

In 1994, Member of Parliament of Rajya Sabha.

In 2014, Member of Parliament from Lucknow, Uttar Pradesh.

In 2019, Cabinat Minister of Defence.

He is married to Savitri Singh in year 1971 in Uttar Pradesh. He has 3 Children, 2 sons and 1 daughter namely Pankaj Singh, Neeraj Singh and Anamika Singh.

His son Pankaj Singh is a politician and Member of the Legislative Assembly from Noida (Assembly constituency),Uttar Pradesh from BJP.