Rakesh Jhunjhunwala (born 5 July 1960) is an Indian billionaire, investor, trader, and chartered accountant. He manages his own portfolio as a partner in his asset management firm, Rare Enterprises. 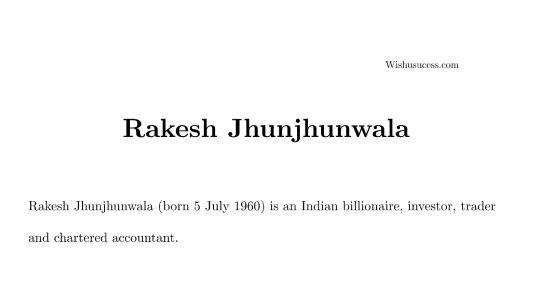 Jhunjhunwala grew up in Mumbai, where his father worked as an income tax officer. He graduated from Sydenham College and thereafter enrolled at the Institute of Chartered Accountants of India.

Jhunjhunwala is the chairman of Aptech Limited and Hungama Digital Media Entertainment Pvt. Ltd. and sits on the board of directors of

He is popularly referred to as the "Warren Buffett of India" and the "King of Bull Market".

Jhunjhunwala's stocks fell by up to 30% in December 2011. He recovered his losses in February 2012. These ups and downs forced him to reduce his vulnerability by trimming his portfolio to one-third. His attempts to divest his Aptech stake had no takers.

Like the Fake Steve blog, there is a popular parody blog called The Secret Journal of Rakesh Jhunjhunwala that humorously parodies the Investor's life. On 7 June 2012, the authors were revealed by The Economic Times to be two people. For the first year, Forbes columnist Mark Fidelman and for the remaining years, Author and Writer Aditya Magal.

There is an ongoing investigation against Rakesh Jhunjhunwala for insider trading as of 28 January 2020.

Net Worth of Mukesh Dhirubhai Ambani