The Roscosmos State Corporation for Space Activities commonly known as Roscosmos is a state corporation responsible for the wide range and types of space flights and cosmonautics programs for the Russian Federation.

Originally part of the Federal Space Agency the corporation evolved and consolidated itself into a national state corporation on 28 December 2015 through a presidential decree.

Before 1992, Roscosmos was a part of the Russian Aviation and Space Agency.

The headquarters of Roscosmos are located in Moscow, while the main Mission Control space center site is in the nearby city of Korolyov as well as the Yuri Gagarin Cosmonaut Training Center located in Star City of Moscow Oblast.

The launch facilities used are Baikonur Cosmodrome in Kazakhstan (with most launches taking place there, both crewed and uncrewed), and Vostochny Cosmodrome being built in the Russian Far East in Amur Oblast.

The current director since May 2018 is Dmitry Rogozin. In 2015 the Russian government merged Roscosmos with the United Rocket and Space Corporation, the re-nationalized Russian space industry, to create the Roscosmos State Corporation.

On February 22, 2019, the Roscosmos Director, Dmitry Rogozin, has announced the construction start of new headquarters in Moscow, Zavodskaya Street 18: The National Space Centre. 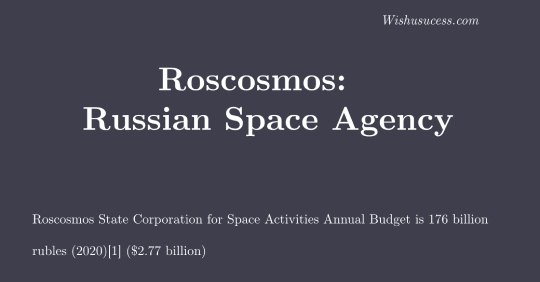 The Soviet space program did not have central executive agencies. Instead, its organizational architecture was multi-centered; it was the design bureaus and the council of designers that had the most say, not the political leadership.

The creation of a central agency after the separation of Russia from the Soviet Union was therefore a new development. The Russian Space Agency was formed on February 25, 1992, by a decree of President Yeltsin. Yuri Koptev, who had previously worked with designing Mars landers at NPO Lavochkin, became the agency's first director.

In the early years, the agency suffered from lack of authority as the powerful design bureaus fought to protect their own spheres of operation and to survive.

For example, the decision to keep Mir in operation beyond 1999 was not taken by the agency; instead, it was made by the private shareholder board of the Energia design bureau. Another example is that the decision to develop the new Angara rocket was rather a function of Khrunichev's ability to attract resources than a conscious long-term decision by the agency.

ISS involvement: The Zarya module was the first module of the ISS, launched in 1998.

The Russian Space Agency is one of the partners in the International Space Station (ISS) program; it contributed the core space modules Zarya and Zvezda, which were both launched by Proton rockets and later were joined by NASA's Unity Module.

The Rassvet module was launched aboard Space Shuttle Atlantis and will be primarily used for cargo storage and as a docking port for visiting spacecraft. The Nauka module is the last component of the ISS, due to be launched in November 2019.

Roscosmos is furthermore responsible for expedition crew launches by Soyuz-TMA spacecraft and resupplies the space station with Progress space transporters.

After the initial ISS contract with NASA expired, RKA and NASA, with the approval of the US government, entered into a space contract running until 2011, according to which Roscosmos will sell NASA spots on Soyuz spacecraft for approximately $21 million per person each way (thus $42 million to and back from the ISS per person) as well as provide Progress transport flights ($50 million per Progress as outlined in the Exploration Systems Architecture Study).

RKA has announced that according to this arrangement, crewed Soyuz flights will be doubled to 4 per year and Progress flights also doubled to 8 per year beginning in 2008.

RKA also provides space tourism for fare-paying passengers to ISS through the Space Adventures company. As of 2009, six space tourists have contracted with Roscosmos and have flown into space, each for an estimated fee of at least $20 million (USD).

Science programs: RKA operates a number of programs for earth science, communication, and scientific research. Future projects include the Soyuz successor, the Prospective Piloted Transport System, scientific robotic missions to one of the Mars moons as well as an increase in Lunar orbit research satellites.

Rockets: Roscosmos uses a family of several launch rockets, the most famous of them being the R-7, commonly known as the Soyuz rocket that is capable of launching about 7.5 tons into low Earth orbit (LEO).

The Proton rocket (or UR-500K) has a lift capacity of over 20 tons to LEO. Smaller rockets include Rokot and other Stations.

Currently rocket development encompasses both a new rocket system, Angara, as well as enhancements of the Soyuz rocket, Soyuz-2 and Soyuz-2-3. Two modifications of the Soyuz, the Soyuz-2.1a and Soyuz-2.1b have already been successfully tested, enhancing the launch capacity to 8.5 tons to LEO.

New piloted spacecraft: One of RKA's projects that was widely covered in the media in 2005 was Kliper, a small lifting body reusable spacecraft.

While Roscosmos had reached out to ESA and JAXA as well as others to share development costs of the project, it also stated that it will go forward with the project even without the support of other space agencies. This statement was backed by the approval of its budget for 2006–2015, which includes the necessary funding of Kliper.

However, the Kliper program was cancelled in July 2006, and has been replaced by the new Orel project. As of 2016 no crafts were launched.

Space Systems: "Resurs-P" is a series of Russian commercial Earth observation satellites capable of acquiring high-resolution imagery (resolution up to 1.0 m). The spacecraft is operated by Roscosmos as a replacement of the Resurs-DK No.1 satellite.

Create HEO space system "Arctic" to address the hydrological and meteorological problems in the Arctic region and the northern areas of the Earth, with the help of two spacecraft "Arktika-M" and in the future within the system can create a communications satellite "Arktika-MS" and radar satellites "Arktika-R."

The launch of two satellites "Obzor-R" (Review-R) Remote Sensing of the Earth, with the AESA radar and four spacecraft "Obzor-O" (Review-O) to capture the Earth's surface in normal and infrared light in a broad swath of 80 km with a resolution of 10 meters. The first two satellites of the projects planned for launch in 2015.

The military counterpart of the RKA is the Military Space Forces (VKO). The VKO controls Russia's Plesetsk Cosmodrome launch facility. The RKA and VKO share control of the Baikonur Cosmodrome, where the RKA reimburses the VKO for the wages of many of the flight controllers during civilian launches.

The RKA and VKO also share control of the Yuri Gagarin Cosmonaut Training Center. It has been announced that Russia is to build another spaceport in Tsiolkovsky, Amur Oblast. The Vostochny Cosmodrome is scheduled to be finished by 2018.

As of 2020, Roscosmos had the following subsidiaries: