We have prepared this post keeping in mind the students of Rajasthan Technical University, Kota, which is based on the syllabus of rtu cgm (computer graphics and multimedia) which is only intended to prepare the students for any kind of interview and viva. 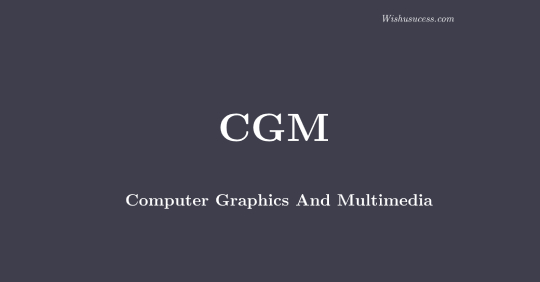 1.) What is scan conversion?

Ans. A major task of the display processor is digitizing a picture definition given in an application program into a set of pixel-intensity values for storage in the frame buffer. This digitization process is called scan conversion.

Ans. The process of determining the appropriate pixels for representing picture or graphics object is known as rasterization.

6.) Write the two techniques for producing color displays with a CRT?

7.) What is vertical retrace of the electron beam?

Ans. In raster scan display, at the end of one frame, the electron beam returns to the left top corner of the screen to start the next frame.

Ans. Some system has only one bit per pixel; the frame buffer is often referred to as bitmap.

Ans. The maximum number of points that can be displayed without overlap on a CRT is referred to as the resolution.

12.) What is horizontal retrace of the electron beam?

Ans. In the CRT, heat is applied to the cathode by directing a current through a coil of wire, is called filament.

Ans. Some system has multiple bits per pixel, the frame buffer is often referred to as pixel map.

17.) List out the merits and demerits of Penetration techniques?

Ans. The merits and demerits of the Penetration techniques areas follows. It is an inexpensive technique. It has only four colors. The quality of the picture is not good when it is compared to other techniques. It can display color scans in monitors. Poor limitation etc.

Ans. The merits and demerits of direct view storage tubes[DVST] are as follows. It has a flat screen. Refreshing of screen is not required. Selective or part erasing of screen is not possible. It has poor contrast Performance is inferior to the refresh CRT.

19.) What do you mean by emissive and non-emissivedisplays?

Ans. The emissive display converts electrical energy into lightenergy. The plasma panels, thin film electro-luminescent displays are the examples.The Non-emissive are optical effects to convert the sunlightor light from any other source to graphic form. Liquid crystal display is an example

20.) List out the merits and demerits of Plasma paneldisplay?

Ans. Merits. Refreshing is not required. Produce a very steady image free of Flicker. Less bulky than a CRT.Demerits. Poor resolution of up to 60 d.p.i. It requires complex addressing and wiring. It is costlier than CRT.

Ans. The time it takes the emitted light from the screen to decay one tenth of its original intensity is called as persistence.

Ans. The ratio of vertical points to the horizontal points necessary to produce length of lines in both directions of the screen is called the Aspect ratio. Usually the aspect ratio is ¾.

23.) What is the difference between impact and non-impactprinters?

Ans. Impact printer press formed character faces against an inked ribbon on to the paper. A line printer and dot-matrix printer are examples.Non-impact printer and plotters use Laser techniques,inkjet sprays, Xerographic process, electrostatic method sand electrothermal methods to get images onto the papers. Examples are: Inkjet/Laser printers.

Ans. Pixel is shortened forms of picture element. Each screen point is referred to as pixel or pixel.

26.) Where the video controller is used?

Ans. A special purpose processor, which is used to control the operation of the display device, is known as video controller or display controller.

Ans. Run length encoding is a compression technique used to store the intensity values in the frame buffer, which store search scan line as a set of integer pairs. One number each pair indicates an intensity value, and second number specifies the number of adjacent pixels on the scan line that are to have that intensity value.

28.) What is point in the computer graphics system?

Ans. The point is a most basic graphical element & is completely defined by a pair of user coordinates (x, y).

Ans. A line is of infinite extent can be defined by an angle of slope q and one point on the line P=P(x,y). This can also be defined as y=mx+C where C is the Y intercept.

Ans. Circle is defined by its center xc, yc and its radius in user coordinate units. The equation of the circle is (x-xc) + (yyc)= r2.

31.) What are the various attributes of a line?

Ans. The line type, width and color are the attributes of the line.The line type include solid line, dashed lines, and dotted lines.

Ans. The process of adjusting intensities of the pixels along the line to minimize the effect of aliasing is called anti aliasing.

Ans. Transformation is the process of introducing changes in the shape size and orientation of the object using scaling rotation reflection shearing & translation etc.

Ans. Translation is the process of changing the position of an object in a straight-line path from one coordinate location to another. Every point (x , y) in the object must under go a displacement to (x|,y|). the transformation is:x| = x + tx ; y| = y+ty

Ans. A 2-D rotation is done by re positioning the coordinates along a circular path, in the x-y plane by making an angle with the axes. The transformation is given by:X| = r cos (q + f) and Y| = r sin (q + f).

Ans. A 2-D rotation is done by re positioning the coordinates along a circular path, in the x-y plane by making an angle with the axes. The transformation is given by:X| = r cos (q + f) and Y| = r sin (q + f).

Ans. The reflection is actually the transformation that produces a mirror image of an object. For this use some angles and lines of reflection.

39.) What are the two classifications of shear transformation?

Ans. Give one example Serif fonts has a little decoration at the end of the letter,but serif font has not. Times, new century schoolbook is the examples of serif fonts. Arial, optima are examples for sanserif fonts.

Ans. A portion of a picture that is to be displayed by a window is known as window port. The display area of the part selected or the form in which the selected part is viewed is known as view port.

Ans. Clipping is the method of cutting a graphics display to neatly fit a predefined graphics region or the view port.

44.) What is the need of homogeneous coordinates?

Ans. To perform more than one transformation at a time, use homogeneous coordinates or matrixes. They reduce unwanted calculations intermediate steps saves time and memory and produce a sequence of transformations.