The Securities and Exchange Board of India (SEBI) is the regulator of the securities and commodity market in India owned by the Government of India. It was established in 12 April 1988 and given Statutory Powers on 30 January 1992 through the SEBI Act, 1992. 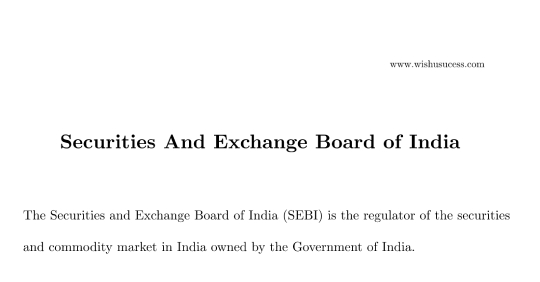 Securities and Exchange Board of India History

Securities and Exchange Board of India (SEBI) was first established in 1988 (originally formed in 1992) as a non-statutory body for regulating the securities market. It became an autonomous body on 12 April 1992 and was accorded statutory powers with the passing of the SEBI Act 1992 by the Indian Parliament. Soon SEBI was constituted as the regulator of capital markets in India under a resolution of the Government of India. SEBI has its headquarters at the business district of Bandra Kurla Complex in Mumbai and has Northern, Eastern, Southern and Western Regional Offices in New Delhi, Kolkata, Chennai, and Ahmedabad respectively. It has opened local offices at Jaipur and Bangalore and has also opened offices at Guwahati, Bhubaneshwar, Patna, Kochi and Chandigarh in Financial Year 2013–2014.

The SEBI is managed by its members, which consists of the following:

Securities and Exchange Board of India Organisation Structure

Ajay Tyagi was appointed chairman on 10 February 2017, replacing U K Sinha, and took charge of the chairman office on 1 March 2017. In February 2020, Ajay Tyagi's term as chairman of SEBI was extended by another six months.

Securities and Exchange Board of India Functions And Responsibilities

SEBI has to be responsive to the needs of three groups, which constitute the market:

SEBI has three functions rolled into one body: quasi-legislative, quasi-judicial and quasi-executive. It drafts regulations in its legislative capacity, it conducts investigation and enforcement action in its executive function and it passes rulings and orders in its judicial capacity. Though this makes it very powerful, there is an appeal process to create accountability. There is a Securities Appellate Tribunal which is a three-member tribunal and is currently headed by Justice Tarun Agarwala, former Chief Justice of the Meghalaya High Court. A second appeal lies directly to the Supreme Court. SEBI has taken a very proactive role in streamlining disclosure requirements to international standards.

For the discharge of its functions efficiently, SEBI has been vested with the following powers:

There are two types of brokers:

SEBI has enjoyed success as a regulator by pushing systematic reforms aggressively and successively. SEBI is credited for quick movement towards making the markets electronic and paperless by introducing T+5 rolling cycle from July 2001 and T+3 in April 2002 and further to T+2 in April 2003. The rolling cycle of T+2 means, Settlement is done in 2 days after Trade date. SEBI has been active in setting up the regulations as required under law. SEBI did away with physical certificates that were prone to postal delays, theft and forgery, apart from making the settlement process slow and cumbersome by passing Depositories Act, 1996.

SEBI has also been instrumental in taking quick and effective steps in light of the global meltdown and the Satyam fiasco.[citation needed] In October 2011, it increased the extent and quantity of disclosures to be made by Indian corporate promoters. In light of the global meltdown, it liberalized the takeover code to facilitate investments by removing regulatory structures. In one such move, SEBI has increased the application limit for retail investors to ₹ 200,000, from ₹ 100,000 at present.

Controversies of Securities and Exchange Board of India (SEBI)

Supreme Court of India heard a Public Interest Litigation (PIL) filed by India Rejuvenation Initiative that had challenged the procedure for key appointments adopted by Govt of India. The petition alleged that, "The constitution of the search-cum-selection committee for recommending the name of chairman and every whole-time members of SEBI for appointment has been altered, which directly impacted its balance and could compromise the role of the SEBI as a watchdog." On 21 November 2011, the court allowed petitioners to withdraw the petition and file a fresh petition pointing out constitutional issues regarding appointments of regulators and their independence. The Chief Justice of India refused the finance ministry's request to dismiss the PIL and said that the court was well aware of what was going on in SEBI. Hearing a similar petition filed by Bengaluru-based advocate Anil Kumar Agarwal, a two judge Supreme Court bench of Justice SS Nijjar and Justice HL Gokhale issued a notice to the Govt of India, SEBI chief UK Sinha and Omita Paul, Secretary to the President of India.

Further, it came into light that Dr KM Abraham (the then whole time member of SEBI Board) had written to the Prime Minister about malaise in SEBI. He said, "The regulatory institution is under duress and under severe attack from powerful corporate interests operating concertedly to undermine SEBI". He specifically said that Finance Minister's office, and especially his advisor Omita Paul, were trying to influence many cases before SEBI, including those relating to Sahara Group, Reliance, Bank of Rajasthan and MCX.

Process of de-recognition and exit

Following is an excerpts from the circular:

1. Exchanges may seek exit through voluntary surrender of recognition.

2. Securities where the annual trading turnover on its own platform is less than Rs 10 billion can apply to SEBI for voluntary surrender of recognition and exit, at any time before the expiry of two years from the date of issuance of this Circular.

3. If the Securities exchange is not able to achieve the prescribed turnover of Rs 10 billion on continuous basis or does not apply for voluntary surrender of recognition and exit before the expiry of two years from the date of this Circular, SEBI shall proceed with compulsory de-recognition and exit of such Securities exchanges, in terms of the conditions as may be specified by SEBI.

4. Securities Exchanges which are already de-recognized as on date, shall make an application for exit within two months from the date of this circular. Upon failure to do so, the de-recognized exchange shall be subject to compulsory exit process.