Since the founding of the Bombay stock exchange, stock markets in India, Stock market crashes in India, particularly in Mumbai (BSE and NSE) have seen a number of booms as well as crashes. 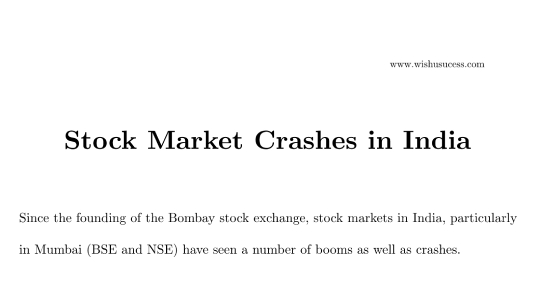 As per the Business Standard, India experienced its first stock market crash in 1865. Although the Bombay stock exchange had not yet been formed, Gujrati and Parsi traders often traded shares mutually at the junction of Rampart row and Meadows street. In the preceding years, speculation about the results of the American civil war had led to irrational increases of stocks of new Indian companies. Shares of the Back bay reclamation (face value Rs. 5,000) touched Rs. 50,000 and those of Bank of Bombay (face value Rs.500) touched Rs. 2,850. Money made from cotton was pumped into the stock market driving prices of stocks higher. Banks loaned money to speculators further fuelling the bull run and wealthy merchants like Premchand Roychand dispensed advice that led to ordinary people placing their bets on shares.

On 16 November 1864, the governor warned civil servants not to participate in the current frenzy. New companies were floated with new share issues publicized in the newspapers. Forward contracts further promoted speculative purchases. However, the market crashed in May 1865 when the civil war ended, causing cotton prices to fall. Shares of the Backbay reclamation fell by 96% to under Rs. 2,000 and a number of merchants including Behramji Hormuzjee Cama went bankrupt. The crash not only led to a dwindling of the financial fortunes of many, it also led to a decrease of the city's population by 21% due to the closing down of many enterprises. On 1 July 1865, when hundreds of "time bargains" had matured (as the future contracts were then known), buyers and sellers alike defaulted leading to the burst of the bubble. A share of Bank of Bombay which had touched Rs 2,850 at the peak of the market slumped to just Rs 87 in the aftermath of the bust.

Stock Market Crashes in India in 1991

After economic liberalisation in India in 1991, the stock market saw a number of cycles of booms and busts, some related to scams such as those engineered by players such as Harshad Mehta and Ketan Parekh, some due to global events and a few due to circular trading, rigging of prices and the irrational exuberance of investors leading to bubbles that finally burst.

The sensex fell by 617 points to 12,455 though during the course of the day, it fell further. As per the analysts at rediff, "The Sensex opened with a huge negative gap of 260 points at 12,812 following the Reserve Bank of India decision to hike the cash reserve ratio and repo rate. Unabated selling, mainly in auto and banking stocks, saw the index drift to lower levels as the day progressed. The index tumbled to a low of 12,426 before finally settling with a hefty loss of 617 points (4.7%) at 12,455".
1 August 2007: The sensex continued to fall and finally settled at 14,936 while the nifty fell by 183 points to 4,346. As per Rediff, "The Sensex opened with a negative gap of 207 points at 15,344 amid weak trends in the global market and slipped deeper into the red. Unabated selling across-the-board saw the index tumble to a low of 14,911. The Sensex finally ended with a hefty loss of 615 points at 14,936. The NSE Nifty ended at 4,346, down 183 points. This was the third biggest loss in absolute terms for the index (thus far)".

The sensex continue to languish a good 500 points down for most of the trading session, finally closing at a low of 14,358, a loss of 643 points.

While activity remained normal in the morning, during noon trades, the sensex tumbled down as the intensity of selling increased towards the closing bell of the BSE. The sensex tumbled all the way to a low of 17,771 - down 1,428 points from the same day's high. It finally settled on 17,998 with a loss of 717 points (3.8%). The Nifty too lost 208 points and closed at 5,351.

Trying to explain the fall, rediff recounted that "Mirroring weakness in other Asian markets, the Sensex saw relentless selling." The index tumbled to a new low of 18,515 - down 766 points from the previous day's close. It finally ended with a loss of 678 points at 18,603. The Nifty also lost 220 points to close at 5,561.

Stock Market Crashes in India in 2008

on 21 Jan 2008, the BSE fell by 1408 points to 17,605 leading to one of the largest erosion's in investor wealth. The BSE stopped trading for a while at 2:30 pm due to a technical snag although its circuit filter allows swings of up to 15% before stopping trading for an hour. Referred to in the media as "Black Monday", the fall was blamed by analysts at HSBC mutual fund and JP Morgan on a large variety of reasons including change in the global investment climate, fears of United States' economy going into a recession, FIIs and foreign hedge funds selling in order to reallocate their funds from risky emerging markets to stable developed markets, a cut in US interest rates, global bourses (often referred to as event related volatility), volatility in commodities markets, a combination of global and local factors ("...other emerging markets were down nearly 20% so India is playing catch-up..."), huge build-ups in derivatives positions leading to margin calls and that many IPOs had sucked out liquidity from the primary market into the secondary market. HSBC mutual funds analysts predicted further falls in the stock market, and the analysts at JP Morgan were of the opinion that market would fall a further 10-15%.

On 26 November 2008, the Sensex continue to fall, in the bargain (as per the financial newspaper Livemint) "...dashing middle class dreams".

Analysts at Livemint and Ajmera associates, Anagram capital and Ace financial services ascribed a number of reasons for this, ranging from large sales by foreign institutional investors (FII), withdrawal of money by the insurance sector. They all felt that the Sensex could rise by at the most 20-30% in 2009, from its them level of 9000 points.

Stock Market Crashes in India in 2009

Stock Market Crashes in India in 2015

On 24 August 2015, the BSE Sensex crashed by 1,624 points and the NSE fell by 490 points. Finally the indices closed at 25,741 points and the Nifty to 7,809 points. The reason given for this crash was given as a ripple effect due to fears over a slowdown in China, as the Yuan had been devalued two weeks ago leading to a fall in the currency rates of other currencies and the rapid selling of stocks in China and India. The Shanghai stock exchange too fell by 8.5%. A variety of other reasons too were given for this fall by analysts including disappointing earnings in the first quarter for many Indian companies, somber commentaries by their management leading to doubts regarding their recovery and a below average monsoon for that year.

The stock markets in India continued to fall in 2016. By 16 February 2016, the BSE had seen a fall of 26% over the past eleven months, losing 1607 points in four consecutive days of February. The reasons given for this included NPAs of Indian banks, "global weaknesses" and "global factors". In the four months from November 2015 to February 2016, FIIs were reported to have sold equities worth Rs 17,318 crore as, in the opinion of analysts, concerns grew over growth in China and as crude oil prices tumbled below $30 per barrel.

On 9 November 2016, crashed by 1689 points, believed by analysts to be due to the crack down on black money by the Indian government, resulting in franctic selling. The sensex nosedived by 6% to 26,902 and the Nifty dropped by 541 points to 8002. These were said to be due to the demonetization drive by the Modi government. The Hindu was of the opinion that the weakening rupee and the US presidential election too had some bearing on the behavior of investors. The fall was concurrent with falls in other Asian stock markets including the Hang Seng, Nikkei and the Shanghai Composite. The S&P had also fallen by 4.45%.

Stock Market Crashes in India in 2018

Stock Market Crashes in India in 2020

On 1 February 2020, as the FY 2020-21 Union budget was presented in the lower house of the Indian parliament, Nifty fell by over 3% (373.95 points) while Sensex fell by more than 2% (987.96 points). The fall was also weighed by the global breakdown amid coronavirus pandemic centered in China.

On 28 February 2020, Sensex lost 1448 points and Nifty fell by 432 points due to growing global tension caused by coronavirus, which W.H.O said has a pandemic potential. Both BSE and NSE fell for the entire five days of the week ending with the worst weekly fall since 2009.

On March 4 and 6, markets fell by around 1000 points and several crores of wealth was wiped out. On 6 March 2020, Yes Bank was taken over by RBI under its management for reconstruction and will be merged with SBI. This was done to ensure smooth functioning of the bank as it was struggling for couple of years to cope up with heavy pressure due to cleaning of bad loans.

However, the Sensex continued to fall straight for 4–continuous days till 19 March 2020, losing 5815 points during the period.