Ajey Nagar, better known as Carry Minati, is an Indian YouTuber and streamer from Faridabad, India. He is known for his comedic skits and reactions to various online topics on his channel CarryMinati.

Nagar was born on 12 June 1999 in Faridabad, a city near India's national capital New Delhi, where he is based.

He attended school till 2016, when he dropped out to pursue his YouTube career; he decided to skip his Class-XII Board examination after feeling unconfident about the economics examination, and later completed it through long-distance learning. 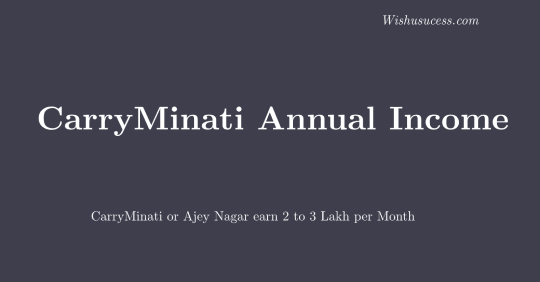 Popularly referred to as 'CarryMinati', or just 'Carry', Ajey Nagar is known for his distinctive and energetic Hindi-language commentary.[3][2] He is mainly involved in creating diss songs, satirical parodies and comedy, apart from live gaming.

Nagar started posting videos on YouTube since he was 10 years old.

Initially, he posted videos where he performed mimicry of Sunny Deol and played video games.

CarryMinati is his original YouTube channel, which has been active since 2014.

In 2014, the channel's name was AddictedA1 and Nagar used to upload recorded video game footage along with his reactions on the game. The channel was not very successful.

In 2015, the Channel's name became CarryDeol, on which Nagar uploaded footage of playing Counter Strike: Global Offensive while mimicking Sunny Deol. Subsequently, he changed the name of the channel to CarryMinati when he started 'roasting people'.

In early 2017, Nagar started another YouTube channel called CarryIsLive, where he live-streams himself playing video games.

Along with his team, Nagar uses a part of his Faridabad house as a studio for producing content.