1.What is Data Communication?

For data communications to occur, the communicating devices must be part of a communication system made up of a combination of hardware (physical equipment) and software (programs).

2. What are the Characteristics of Data Communications?

The effectiveness of a Data Communication and Computer Networks system depends on four fundamental characteristics: delivery, accuracy, timeliness, and jitter.

.3. What are the Components of Data Communication?

The different components of Data communication are shown in the following figure.

4. What are Different Data Flow Directions?

Communication between any two devices can be simplex, half-duplex, or full-duplex.

The half-duplex mode is like a one-lane road with traffic allowed in both directions. When cars are traveling in one direction, cars going the other way must wait. In a half-duplex transmission, the entire capacity of a channel is taken over by whichever of the two devices is transmitting at the time. Walkie-talkies and CB (citizens band) radios are both half-duplex systems.

The half-duplex mode is used in cases where there is no need for communication in both directions at the same time; the entire capacity of the channel can be utilized for each direction.

A network is two or more devices connected through links. A link is a communications pathway that transfers data from one device to another. For communication to occur, two devices must be connected in some way to the same link at the same time.

There are two possible types of connections: point-to-point and multipoint. 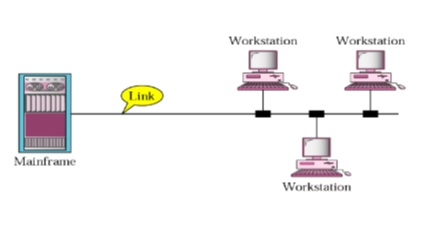 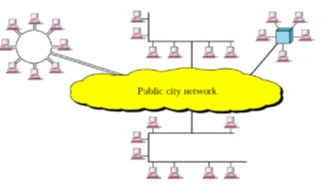 The term physical topology refers to the way in which a network is laid out physically.

Two or more devices connect to a link; two or more links form a topology. The topology of a network is the geometric representation of the relationship of all the links and linking devices (usually called nodes) to one another.

There are four basic topologies possible: mesh, star, bus, and ring which are shown in the following figure. 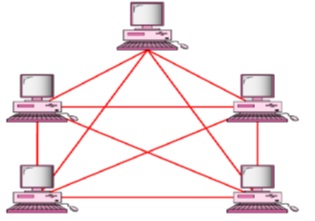 In a star topology, each device has a dedicated point-to-point link only to a central controller, usually called a hub. The devices are not directly linked to one another. Unlike a mesh topology, a star topology does not allow direct traffic between devices. The controller acts as an exchange: If one device wants to send data to another, it sends the data to the controller, which then relays the data to the other connected device as shown in the following Figure. 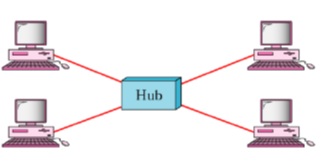 3. Bus Topology: The preceding examples all describe point-to-point connections. A bus topology, on the other hand, is multipoint. One long cable acts as a backbone to link all the devices in a network which is shown in the following figure.

Nodes are connected to the bus cable by drop lines and taps. A drop line is a connection running between the device and the main cable. A tap is a connector that either splices into the main cable or punctures the sheathing of a cable to create a contact with the metallic core. As a signal travels along the backbone, some of its energy is transformed into heat. Therefore, it becomes weaker and weaker as it travels farther and farther. For this reason there is a limit on the number of taps a bus can support and on the distance between those taps.

In a ring topology, each device has a dedicated point-to-point connection with only the two devices on either side of it. A signal is passed along the ring in one direction, from device to device, until it reaches its destination. Each device in the ring incorporates a repeater. When a device receives a signal intended for another device, its repeater regenerates the bits and passes them along. A typical ring topology is as shown in the figure.

A network can be hybrid. For example, we can have a main star topology with each branch connecting several stations in a bus topology as shown in the following figure.

If one link fails, only that link is affected. All other links remain active. This factor also lends itself to easy fault identification and fault isolation.